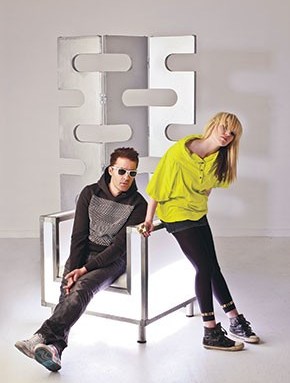 Poised to release their first album, Brit pop duo The Ting Tings have their own sound, not to mention style to spare.

A year ago, Katie White and Jules De Martino were just two friends jamming in a studio space in a former cotton mill in Manchester, England. They dubbed themselves The Ting Tings — the name of a Chinese woman White used to work with at Selfridges — and invited friends to a show. “It was an excuse to get drunk and have a party,” laughs De Martino. “We were on stage playing rubbish.”

“Rubbish” must be in the ear of the beholder, because the party was a hit, and soon led to bigger gatherings. Word spread, and the duo started drawing upward of 150 people who came to hear White, 23, on vocals and guitar, and De Martino, 33, on drums. Their self-described DIY-garage-pop is an infectious concoction, with traces of the Talking Heads and the Spice Girls.

The Ting Tings’ catchy mix worked — and got the attention of record producer Rick Rubin (now co-chairman of Columbia Records), who spotted them playing at a club when they visited Los Angeles last summer. Since then it’s been an indie band’s fantasy — Columbia Records signed them and they’re releasing their first album, “We Started Nothing,” in July.

“We’ve been able to finish our album ourselves in the place we had our parties. They don’t interfere — they just support us,” says De Martino of the freedom the label has given them in terms of producing their songs and letting them choose their album art and the bands with whom they tour.

Fashion-wise, Columbia is also hands-off, trusting White and De Martino to follow the same DIY instincts they started with in the cotton mill. “We don’t have to fight off [stylists],” White jokes. She channels Edie Sedgwick and Blondie with heavy eye makeup and two-toned bleached hair and is a fan of Urban Outfitters, which has a slightly higher-end sensibility in the U.K. than here in the U.S. She also makes her own clothes, such as a crocheted doily dress.

But with The Ting Tings fast entering the limelight, White is open to a fashion upgrade: “Now that we’ve got a record deal, I bought a pair of Miu Miu boots that I adore and a Balenciaga top that I’m wearing to death.”

As for her partner, De Martino says he “likes things that look worn,” but admits he isn’t good at naming labels. He considers Sid Vicious an influence, along with his Fender 78 Stratocaster. De Martino lives in his Lee jeans because they fit well and are broken in, and he wears a Dsquared leather jacket, he claims, more to stay warm than to look cool.

Still, fashion is only part of their musical look, and they often wear whatever they happen to have on that day (the doily dress has made a stage appearance). They also experiment with lighting and onstage projects, and Andy Warhol inspired the video for the single “Great D.J.,” shot with the pair dancing against a backdrop of flashing blocks of color.

“When we go on to perform in bigger shows, we want to be quite experimental,” White says. Along the way, they’ll no doubt preserve their DIY spirit.

PHOTOS BY GEORGE CHINSEE; HAIR BY WESLEY O’MEARA FOR KERASTASE PARIS AND MAKEUP BY KATEY DENNO, BOTH AT THE WALL GROUP; FASHION ASSISTANTS: NICK AXELROD AND DANIELLE SPONDER; STYLED BY KIM FRIDAY