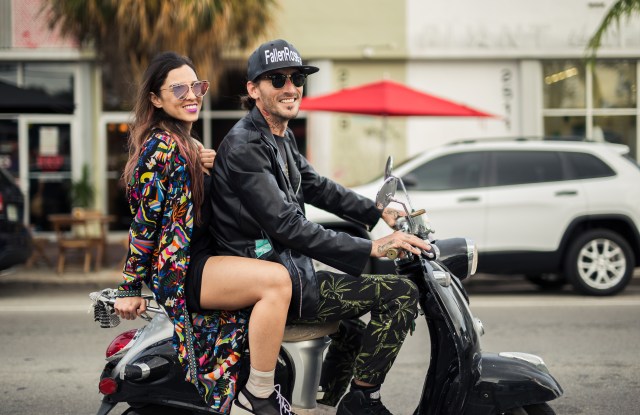 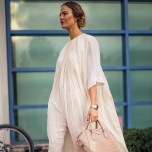 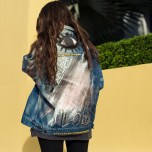 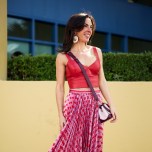 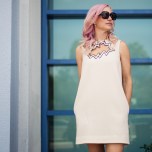 Art Basel Miami Beach attendees embraced the spirit of island dressing through an eclectic wardrobe of airy looks in an assortment of colorful prints and fabrics. This being an art event, the creative crowds were quick to embrace expression through all facets of their look — embellishments such as sequins and words, geometric accessories and details, a bright lipstick choice.

The sticky humidity of South Beach prompted many to shed their planned party layers — Paris Hilton ditched her Balenciaga jacket for bare shoulders during Aby Rosen’s Dec. 1 dinner at The Dutch — while others, such as Jeremy Scott, stuck to their original party outfit choices, even if that meant battling through the heat in a long sleeved suit, such as the rainbow-accented one Scott wore to Moschino and SBE’s party at Delano South Beach.

With nearly cloudless skies blanketing the afternoons on the island, sunglasses were a must during the day, as were sensible flats and sandals, particularly for anyone opting to skip the heavy car traffic snaking up and down Collins Avenue and travel instead by foot to the many hotel parties during the evenings.

For many, the week provided a vacation from colder climates. “I think that was one very clever things that Basel did, by choosing Miami in December,” artist Jose Davila remarked during a luncheon on the beach. “It’s a great opportunity to see all the people we haven’t seen from other countries and reconnect. And it’s warm,” added Hugo McCloud. “I live in New York, so…”

Enjoy the tropical weather while it lasts.