They Are Wearing: H&M Block Party in Paris

The Nineties — or at least the decade's sartorial spirit — were back as the young and imaginatively coiffed gathered in Paris. 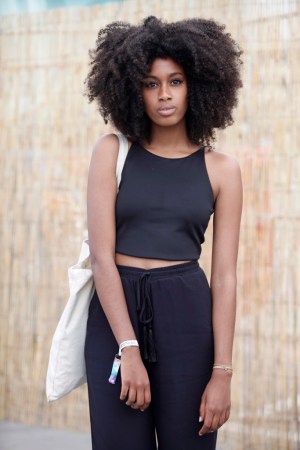 The fashion statement at Hennes & Mauritz’s recent Block Party in Paris was loud and clear: The Nineties are back. Crop tops paired with denim dungarees were everywhere, while graphic prints in black and white or bright neon colors were also favored (along with the occasional My Little Pony and Barbie print) at the third edition of the H&M music festival in the City of Light.

The bash — held on the vast rooftop of Electric, an alternative cultural center overlooking Paris and the Eiffel Tower — was attended by 2,500 people, among them Caroline de Maigret, who said she knows a thing or two about block parties. “I moved to New York in 1994,” said the model, who sported white pants paired with a rust-colored top and boots. Attendees enjoyed hip-hop performances, a skateboard ramp, table football, Parisian food trucks (Le Camion Qui Fume and Le Réfectoire) and a pop-up store featuring pieces from H&M’s Divided collection that recently tapped British singer Foxes as its new face.