They Are Wearing: Hyères Festival

Variations on the sailor stripes were popular, often paired with hats and creeper shoes or platform sandals. 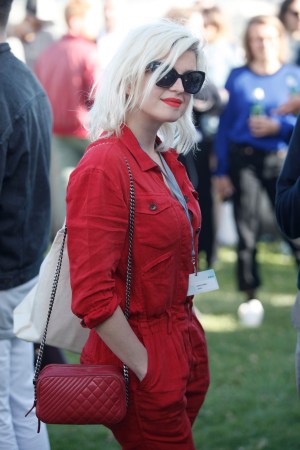 HYÈRES, France — The sun came out — and so did the statement eyewear — in the south of France this past weekend as the fashion pack descended on Hyères for the 31s International Festival of Fashion and Photography. With music stage performances, it felt a bit like the Coachella jamboree, French Riviera style.

The crowd lounging on the grass of the Villa Noailles channeled a casual mood. Variations on sailor stripes were popular, often paired with hats and creeper shoes or platform sandals. Bombers and varsity jackets were favored items when the sea winds blew.

There were some tailored pieces, too, as seen on John Nollet, who was spotted touring the festival’s exhibitions in Dior and Charvet. “I have come here for 10 years, the first time when Anthony Vaccarello won the prize. I love it,” said the celebrity hairstylist, who recently bobbed Lily-Rose Depp and Natalie Portman for the upcoming film “Planétarium” that’s set in the Thirties. Meanwhile, Jean-Paul Goude wore his signature narrow-collar jacket and bulky cropped pants and Audrey Marnay showed off her breezy Tory Burch dress.

You're missing something!
SUBSCRIBE NOW
hyeres They Are Wearing