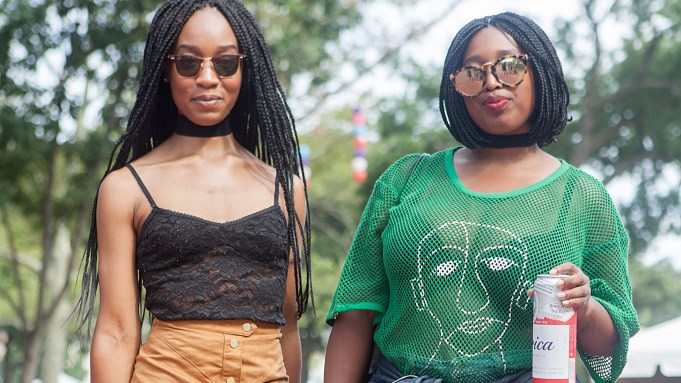 The fifth annual Made in America festival took place in Philadelphia hosted by the beer company Budweiser and entrepreneur Shawn Carter, better known as Jay Z.

Each Labor Day weekend Budweiser and Carter brings together a variation of music genres for a two-day festival; this year’s festival headliners were Rihanna and Coldplay with supporting acts from Chance the Rapper, Jamie XX, ColleGrove (2Chainz and Lil Wayne), A$AP Ferg, Martin Garrix, DJ Khaled and FKA Twigs — alongside many more. Concertgoers included the likes of Bill Clinton, Kelly Rowland and Sasha and Malia Obama.

The festival brought out a majority of red, white and blue attire. The attendees waved their American flags to showcase their pride, wearing American flag T-shirts, socks, shorts and headbands.

But the trendiest attire in the crowd consisted of old-school Ts from bands such as Bone Thugs-n-Harmony and Led Zeppelin, a popular style from Brandy Melville; basketball jerseys; fringe clothing; wide-leg pants; striped tops and bottoms; shredded denim, and graphic Ts. Even Malia Obama participated in the trend by wearing a Harvard basketball cap and a “Smoking is bad” T-shirt after her alleged smoking fiasco at this year’s Lollapalooza.

The popular Nineties television show, “Fresh Prince of Bel-Air,” which took its main character out of Philadelphia, had a strong influence on the men’s wear at the festival. Guys wore eccentric printed shirts and colored baseball hats.

Beyoncé — who wore a palm printed shirt by 5:31 Jerome and a ponytail — spent her last day at the festival celebrating her birthday with Chance the Rapper, who had the crowd sing a song he created for her.

The festival took place in Ben Franklin Parkway with over 80,000 people in attendance.