To Price a Yeezy: A Day in the Life of a RealReal Streetwear Appraiser

LOS ANGELES — “I mean, this is a little sketch but you can see it ripped,” The RealReal Inc.’s senior valuation manager Sean Conway said under his breath as he carefully inspected the Gucci tag affixed with red threads — always two — attaching the label to the Gucci Coco Capitán T-shirt.

There are what look to be random punctures on the bottom half of the shirt, intentional distressing but he’ll have someone do further research on it. Then it’s the black light to check for stains.

For as much as some purists say the art of the hunt in streetwear has become watered down, the treasure hunt by a set of people obsessed with the freshest looks and an innate sense of entrepreneurship pre-Internet and pre-social media is still very much alive and well.

Just ask Conway, who is helping the luxury consignment retailer as it seeks to grow its men’s division and the broader business prepares for an initial public offering. Conway brought with him to The RealReal a book of business incubated across years of working in retail, most recently at Dover Street Market and before that Kith.

Conway himself found his way into the streetwear community as a kid. At 12 he had already amassed a closet of some 40 pairs of sneakers. Today, that collection’s more than 500, cut down significantly from its peak when it numbered 1,000 before Conway sold off a bunch of pairs after moving from New York to Los Angeles.

“I just loved sneakers,” he said. “I think it was just the idea of being fresh, looking good.”

Although streetwear and sneakers’ latest cycle into the mainstream has now been spoken about ad nauseam, the core of the collecting culture exists outside of the overnight lines and raffles hyped within the press and instead is in relationships solidified mostly through handshakes and friends of friends. At the heart of it, is a level of trust that a sneaker source won’t be disclosed or that a reseller isn’t taking advantage of someone on the markup. 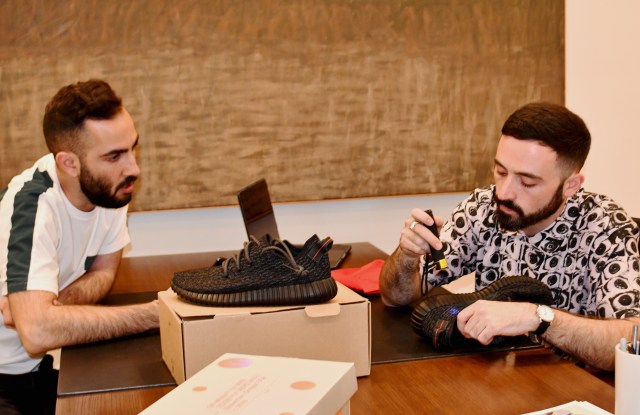 Jonathan Khalili (left) has some pieces from his sneaker collection appraised at The RealReal’s West Hollywood location.  Kari Hamanaka

Conway, 11 months into his job at The RealReal, is tasked with a big charge: The company’s not currently a men’s-driven business and wants to see that diversification, especially with the segment seeing traction.

The company through a spokeswoman declined to say just how much it would like to see men’s grow. The RealReal said in its initial public offering filing with the Securities and Exchange Commission 72 percent of those who shop with them were female as of the end of last year. Its consignor base also skews heavily female at 80 percent as of Dec. 31, 2018.

“We don’t have the guy searching our site constantly for sneakers yet,” Conway said. “We do get some. We need more guys searching for sneakers. People don’t know we have them yet, so it’s a big opportunity.”

The company recently added to Conway’s team with another streetwear and sneaker expert, bringing the total to four.

Part of that challenge boils down to the commission structure, he said, and The RealReal thinks it can cross that hurdle by branding itself on an unmatched service level.

“There’s the commission barrier and that’s the complete honest truth,” Conway said. “There are competitors that offer better commissions, but they don’t offer the services that we offer and they don’t have the reach that we have. They don’t have the experts that we have. We incur a lot of costs and have a lot of overhead costs because of how much we care about making sure everything is authentic, real and in good condition because we do offer a return policy, which nobody else does. The obstacle is explaining that to the consignor who’s like ‘I can take this somewhere else and get 80 or 90 percent [back].’ It’s, like, yeah, but you can also get scammed still.”

Where The RealReal looks to hit hard is nabbing a different customer than the Flight Clubs, Goats, StockXs and eBays of the world. That would be the customer who wants to hit the easy button and have someone take care of everything in exchange for maybe higher pricing or less competitive commissions. 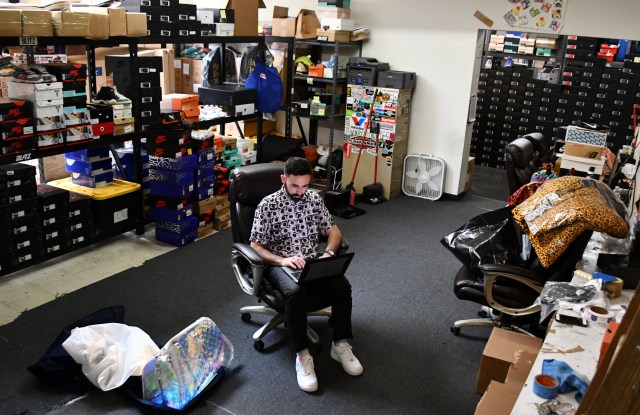 “We have a lot more of the Madison Avenue customer and that’s the customer we speak to the best and the customer that’s willing to pay the extra to know that everything they’re getting is legit,” Conway explained.

His work is fast paced. He checks into the office at 9 a.m. everyday and begins searching the company’s site for what’s trending and what’s come in. Right now it’s plenty of Gucci, Balenciaga and Louis Vuitton. There’s the usual e-mail checks, Slack for interoffice messaging, checking price request tickets through Zendesk software when luxury field managers need a price and monitoring his selling velocity to learn and then improve upon his own work.

He’s just as quick assessing pieces looking to be consigned, drumming up valuations in a matter of minutes, skillfully and artfully going through everything from the texture of a box and its tissue paper filler — those components add between 5 and 10 percent to the value — to the imprints of a sole and ensuring there’s no glue — fakes on a Gucci, for example, have glued-on insoles. And then there’s the research accessing The RealReal’s database to see what’s historically sold, at what price, in what color and in how many days.

The goal is to move everything within 30 days, preferably between four and 15, which would indicate the team made the right call on pricing. If product moves in less than four days, the team could have priced it a little more aggressively, Conway explained.

Once he’s done looking through pieces to be consigned, he enters his notes into the company’s system and the product then gets funneled to copywriters who perfect the description for the public. Pieces are assigned conditions based on a scale of pristine, excellent, very good and good — the lowest value The RealReal would accept.

Afternoon’s creeping in now and Conway has a 1 p.m. appointment with a consignor in the company’s West Hollywood store. He zips up his travel bag, complete with black light, laptop, Wi-Fi hot spot and is off. 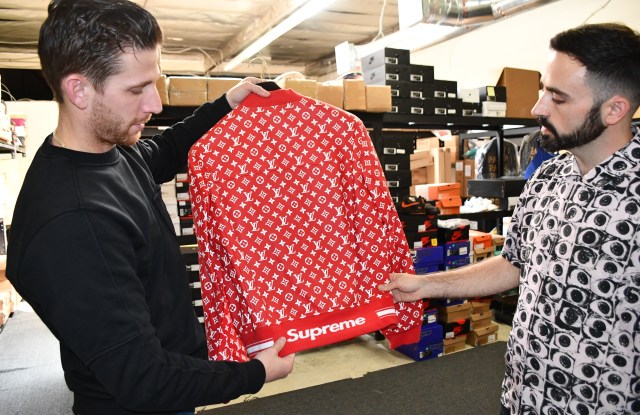 He meets with Jonathan Khalili, who runs an edgy candle company called Wick Decor (think Air Force 1, skull and devil emoji candles) who has brought in a few sneakers to be priced: some Nike Off-Whites and a Yeezy Boost.

Khalili’s tried other resellers in the past but he likes the ease of use with The RealReal.

“That’s the reason why I don’t mess with anyone else,” Khalili said of the hassle of having to handle the shipping when working with other companies.

Then it’s off to battle traffic to get to another consignor, someone Conway met through Dover Street Market and one of the industry’s most well-known collectors and resellers of rare and luxury streetwear, Project Blitz.

The location, somewhere in Southern California — kept private since there’s already been a couple of break-in attempts — is where some $12 million in product is stored. Its celebrity clientele includes Drake, Rihanna and Travis Scott.

It’s a business that began back around 2000 when Project Blitz owner and president Andre Ljustina was selling sneakers on eBay in his parent’s garage and through his own ingenuity and skill at maintaining relationships and ferreting out the best of the best, he’s parlayed the start-up into a full-fledged business.

“Look, obviously the longer you’ve been in something, you last because you have certain connections, right?” Ljustina said in a small room filled with Supreme x The North Face jackets, just off the building’s entrance. “And, whereas, a lot of guys now these days it’s a little bit more difficult [to source], but the biggest portions of it is pulling in ways that we can’t even speak of.”

“A lot of times, too, from our connections, we get a plethora of stuff that just dropped,” said Ljustina’s business partner Severino Alvarez. “Today’s Thursday so there’s a line at Supreme. If there’s a plethora of stuff, that we end up getting, then we can offload to [The RealReal] and it’s a mutually beneficial thing for us because they’re giving us a little bit of exposure.” 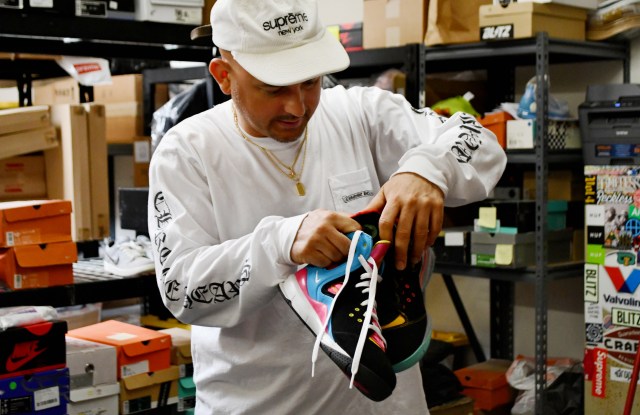 Project Blitz founder Andre Ljustina looks at a pair of samples created by Kanye West that never made it to market.  Kari Hamanaka

Typically, they’ll have product laid out for Conway to see and then price. Fast-moving items like the backpacks that sell around $200 on other reselling sites can potentially achieve $350 to $375 on The RealReal, Conway said. The more rare pieces Project Blitz keeps as its unique calling card — in much the same way brands make product specific for some retailers in a bid to control distribution and their brand equity.

Most of the day is spent having Alvarez and Ljustina bring out rare pieces for the group to ooh and aah over.

There are 20-year-old Nikes and George Kondo’s collaborations with Supreme. Alvarez removes a Louis Vuitton varsity bomber done in collaboration with Supreme from its garment bag. It would likely sell for around $12,000, Conway estimated. The Supreme x The North Face jackets are at least around $5,000.

There’s also a Kanye West sneaker sample that never saw the light of day. They’ve got the original Back to the Future shoes from the movie and then the updates that automatically lace when you step into them. Only 50 pairs were made.

Conway’s sitting in the center of the warehouse using his hotspot to price some of the stuff being brought out for the group to mull over. At this point, it’s mostly collectors and fans talking among themselves, rather than consignor and consignee looking to make a deal.

It’s the kind of camaraderie you get when you’ve entered a secret clubhouse of sorts where, once you’ve proven yourself and that you can be trusted, you’re in.

“I met them over a decade ago,” Conway said. “My network was made through Kith and Dover Street Market. That’s how I met all these people. I was just always buying and selling. Buying and selling.” 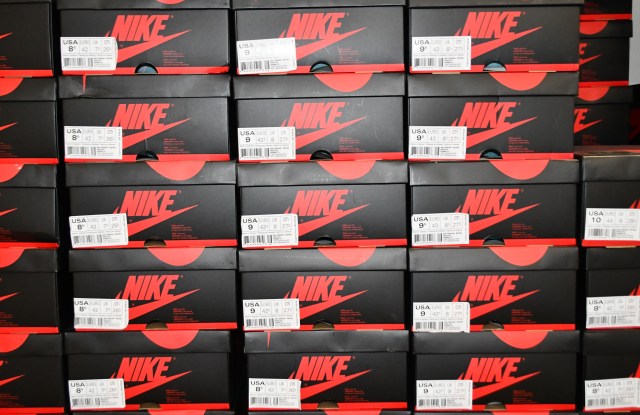 Inside Project Blitz: Wall to wall stacks of sneakers and rare or collectible streetwear sit within its facility.  Kari Hamanaka

On becoming a sneaker appraiser:

“Get into retail. You have to be around the product. You have to love the product and I think once you gain that knowledge and the experience through working with people who are buying it, you can gauge what sells, what’s trending. Also, research. I was always a part of blogs. I was heavily into things that don’t exist anymore because of social media. It was a big culture — the forum culture.”

On the streetwear bubble:

“I don’t think it’s going to burst. It’s just permeating new demographics. It’s getting out there. It’s breaking barriers. The barrier’s broken. It’s already happened with luxury and streetwear, but I don’t see it bursting at all. If anything, it’s trickling into women’s.”

A Chat With Yeezy’s General Counsel

Is Berlin the ‘Truest’ Streetwear Capital?