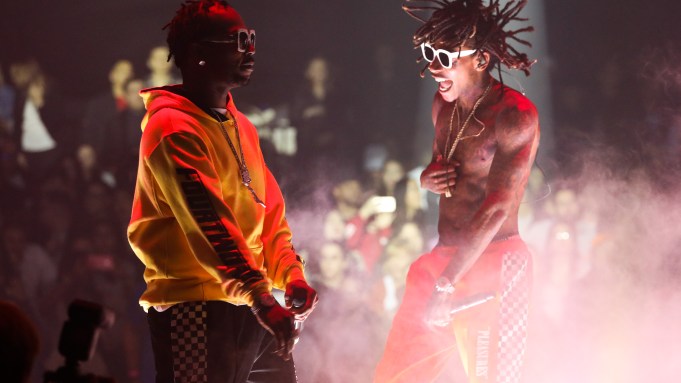 Fashion’s affinity for streetwear and the broader world of hip-hop came into clear focus for the second and final day of Made Los Angeles.

If experiential is the future — since it certainly is the present — Snoop Dogg, Wiz Khalifa, Yung Jake and A$AP Ferg, along with designers from Rochambeau, 424, Joyrich and Pleasures among others, came together Saturday to merge fashion, music and commerce to cap the two-day festival.

Perhaps it was a bit symbolic then when rapper Snoop Dogg came out to kick off the day’s first show playing the single “The Next Episode” to cheers from the crowd. The rapper, whose real name is Calvin Cordozar Broadus Jr., continued to sing along to several more tracks in the center of the theater as some models danced around parked Chevy Impalas while still others walked to show off the collection from his collaboration with Los Angeles label Joyrich, where the rapper’s son, Cordell Broadus, served as creative director.

“Doing this collection was all fun,” said the younger Broadus. “It was my first time doing something like this. It was very important for me to bring my family in so I wanted to involve them in the whole show.”

“This is just the beginning,” he said. “No limits to the next generation.”

Much of what went down both runway performances Saturday were largely hoodies, tops and sweats bearing the bold logos of those involved in the collaborations. They weren’t there to be analyzed, but that wasn’t the point, Khalifa said.

“It’s not really over anybody’s head,” he said in an interview just ahead of the show. “It’s just something new, something cool, something fun. And if you’re into fashion and style and trying new s–t, you know what I’m saying, it’ll fall into what you’re hoping for and expecting.”

The rapper, who also founded the independent record label and music management company Taylor Gang, worked with clothing label 424 which also has a store, called FourTwoFour on Fairfax Avenue, and Los Angeles streetwear company Pleasures on the black and yellow sweatshirts and pants. Taylor Gang also showed a separate selection of looks within the same show, which was theatrical with smoke and laser effects providing the backdrop to performances from Khalifa, Ty Dolla $ign and Juicy J.

“The most important part to me when we sat down and had meetings about [the presentation] was to have people not only see clothes that they’re interested in but have an experience that they always will remember that goes with the clothing,” said Khalifa, who was recently tapped to be in a campaign for Gap Inc. “It involves technology. It involves music. It involves fashion. It involves all of those things and bringing it together and not going so far over people’s heads to the point that they don’t feel involved with it. Make everybody feel like this is our own thing. That was my main goal.”

Accessibility — whether with fashion or music — proved the theme and point of seemingly different worlds converging at Made. It was that topic Khalifa tackled on a panel earlier in the day with the founders from 424, made-to-measure platform CALA and Pleasures.

“Every year, every season we get new inspirations, new mash-ups [and] new ways of putting things together that don’t fit. But now they do,” 424 founder Guillermo Andrade said. “We do Made L.A. and I get to do Paris next week. Crazy.”

Part of what’s driving that blurring of the lines is the rise of the collaboration, which is employed across designers and retailers, but no segment of the industry has adopted it and made it its own more than streetwear.

“Streetwear has kind of tarnished what streetwear is. Let’s be real. There’s a new collaboration on f—ing Hypebeast every day,” Pleasures’ Alex Taylor said. “We wanted to do something different….Technology, music, clothes and putting it all together in one, cohesive project is pretty dope. I think people are taking notice of that.”

Some pieces from Khalifa’s collaboration with 424 and Pleasures were available for purchase at CALA’s Made booth. The company uses 3-D body scanning to take a piece from a collection and tailor make it to an individual’s specifications.

“The traditional way of doing clothing where it’s very much like make a bunch of s–t, send it to a bunch of stores and people buy it, that’s kind of over,” said Andrew Wyatt of CALA on the panel. “ So [with] Instagram, Snapchat and this see-now-buy-now thing, we want to be able to connect creatives to their audience, not in months, but in weeks and I think that’s the future.”

Catherine Bennett, senior vice president and managing director at IMG, reported this year’s event sold out. So did last year’s inaugural Made but she said there were more tickets available for sale this year.

“We have an incredible roster of musicians and chefs and writers. You name it, we have access to it. So we’re trying to find ways to bring all these worlds together in a way that is not just fun, but also provides real value to people’s businesses.”

A free retail marketplace of local and independent designers, co-curated with American Express, was open to the public across both days, adding an element of commerce that goes back to the original genesis for Made — to support and help drive sales for that segment of the industry.

“The [shop small] trend actually manifests out of what is a very familiar behavior for anyone that lives in a neighborhood that they’re excited about living in. You as a consumer, you’ve got your coffee place, your nail salon, your tiny corner bistro that you love,” said American Express vice president and head of Small Business Saturday Amy Marino.

The direct-to-consumer element makes Made unique and relevant in the context of the ongoing dialogue around the evolution of the fashion industry, said Laurence Chandler, the cofounder of men’s brand Rochambeau. The brand partnered with Yung Jake, whose real name is Jake Patterson, on a limited-edition capsule that infused references to Nineties tribal markings mixed with technology in the form of USB cords and CDs on hoodies with boxy cuts and shirts with different length sleeves. Patterson is the rapper and California Institute of the Arts graduate who has performed at the Museum of Contemporary Art Los Angeles and had his work on places such as a billboard for the Ace Hotel.

“People are more informed than they’ve ever been, so it’s one thing to say I’m referencing this [artist’s] work [in a collection],” Chandler said. “We’re really taking a certain pride in bringing the artist into the conversation to people all over the world, so people that know us and people that know Jake, for this crossover.”