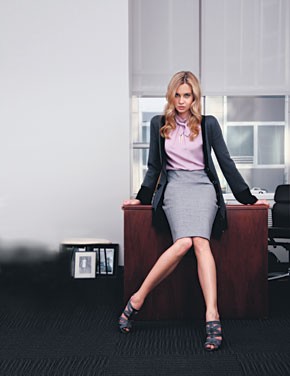 As Dolly Parton once sang, “Working 9 to 5, what a way to make a livin’.” In honor of Administrative Professionals Day, WWD came up with looks to suit office dress codes. Designers are adding a feminine yet sexy edge to classic working-girl staples like pencil skirts and tie-neck blouses.

Secretaries’ — ahem — Administrative Professionals’ Day. And with National Boss Day (Oct. 16) a full six months away, what better time to consider all things office-related. Or, for the purposes of this story, office dress codes.

Given the sea of pants, button-downs and sensible shoes one encounters on a typical weekday commute, the subject seems as innocuous, or perhaps mundane is the word, as a twin set from Ann Taylor Loft. But apparently work-appropriate attire is still a touchy subject among some corporate giants, as several of the firms (Merrill Lynch; Skadden, Arps; Lehman Brothers; Cravath, Swaine & Moore) queried for this story outright declined to comment on their sartorial standards, while others (Willkie Farr & Gallagher; PricewaterhouseCoopers; J.P. Morgan Chase & Co.; Ernst & Young; Morgan Stanley; Apple, and Charles Schwab) simply ignored formal press requests.

Why the veil of secrecy? Once safely inside her cube, does the average jacket-and-blouse-clad woman disrobe into a down-to-there-up-to-there type? Nope. For the most part, it seems, dressing for the office is still a very conservative endeavor. A quick survey of young female employees from various large banks, consulting groups and law firms revealed that they abide by a “business casual” dress code, loosely defined as, no jeans allowed but jackets aren’t necessarily required, at least not in the office; a court of law is a different matter entirely. And their work wardrobes consist largely of conservative separates. “I think a lot of people shop at J. Crew and Banana Republic,” said one attorney at a New Jersey financial house.

Regardless of official policy, or lack thereof, most companies expect a clean, polished look. J.P. Morgan Chase’s policy, leaked to WWD by an appropriately clad employee, states that parameters are determined by the employee’s line of business and reads as such: “As a general rule, clothing should be neat, clean and pressed. Clothing should not be distracting, tight or revealing, or exceptionally loose or low-cut. Torn or frayed clothes, denim, sweat suits, beachwear, beach-style shoes, slippers, shorts, halters, tank tops, crop tops and hats or caps are inappropriate for the workplace. In addition, clothing that bears profane or offensive words or logos is strictly prohibited.”

Of course, there are plenty of examples of more extreme environments, both formal and casual. Cravath is said to hold tight to its old-school, suit-only standard, and one law firm goes so far as to factor clothing into performance reviews. A spokesman for Goldman Sachs reported that while there’s no official written policy, “it’s pretty much business attire. And it doesn’t vary from office to office.” Advertising, fashion and technology notoriously occupy the other end of the spectrum. In the first two, employees who look like they’re going to a club wouldn’t necessarily be sent home to change, whereas in the last, it’s OK if staffers look like they’re working from home. According to a Google spokesman, there is no dress code, “though we do prefer that employees wear clothes,” she says.

“Advertising went casual long before people started introducing casual Fridays,” says Nancy Martin, worldwide director of talent for advertising agency TBWAChiatDay. “We’ve kind of charted our own path in terms of what’s acceptable in the workplace. One of the reasons advertising [is] more creative from a wardrobe perspective is that we have a large creative population that has always pushed the envelope of what they wear to the office.”

But even the most liberal workplaces have their limits. “Inevitably — it usually happens in the summer months — a memo has to get sent out,” says Martin. “It’ll say, ‘If you look in the mirror and you look like you’re going to the beach, perhaps you should go back and stand in front of your closet.’ Our dress code centers more on making sure your body parts are covered.” Or, in other words, common sense. But one human resources executive who worked at TBWAChiatDay before moving into the private bank sector recalled an incident in which a female employee who chose to wear red short shorts with the word “Nantucket” spelled out across the butt was sent home. “It was…distracting,” she says.

Tory Johnson, career contributor for “Good Morning America” and ceo of recruiting firm Women for Hire, says that nothing too tight, too short or too revealing is the maxim to live by, regardless of industry or title. “Too revealing is from toe cleavage to chest cleavage, literally from head to toe,” she says, noting that Havaianas will never qualify as business attire.

And while executives might not necessarily dress the same as interns on a daily basis, in general, it seems policies don’t discriminate between tiers. Assistants are subjected to the same rules as ceo’s, although, as one human resources executive notes, as your level rises, so does the expectation of higher-quality clothes and accoutrements, as in expensive bags, watches and suits, like the Chanel yellow tweed style reportedly worn by a Deutsche Bank senior exec. Still, the “you can tell a lot about a person by her shoes” adage is apparently true. One assistant vice president at an investment bank says, “Admins would wear peep toes, but professionals wouldn’t.” Slingbacks, however, pass muster for all levels.

Work and propriety definitely take priority over fashion in most corporate offices. “Tights and heels and a dress and a funky belt” are about as trendy as it gets, according to one recruiter at a consulting group. And even then, “people don’t really wear that,” she said. “There are probably, like, two or three girls who do.” And when asked if peep-toe Christian Louboutins would make the cut for “professionals,” the assistant vice president replied with marked indifference: “I don’t even know what that means.”