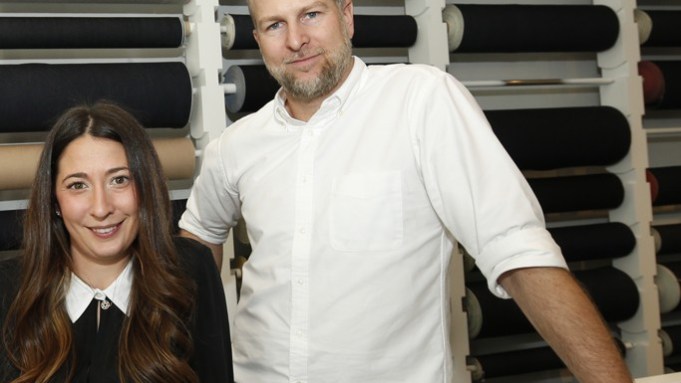 The company, founded as a two-story, 7,300-square-foot jeans store and production facility at 15 Mercer Street in the SoHo district here, has hired Rachel Grayson as executive vice president with responsibility for the wholesale venture. The former Rag & Bone and J Brand executive will also be a partner in the business along with Morrison and the principal financier of the operation, REI Capital, the investment vehicle of Eric Rothfeld that’s also behind Times Three Clothier LLC, maker of Yummie Tummie, and a number of film ventures.

While 3×1 has built its custom business, with its 24 production personnel recently hitting a peak of 222 pairs in a single week, its current wholesale business has been built on capsule collections for retailers such as Barneys New York and Bergdorf Goodman. The business has slowly crept up to 76 accounts, including about 26 overseas in denim-loving markets including Japan.

“Wholesale has become a viable part of the business,” Morrison told WWD. “We’ve addressed retailers’ interest through capsule collections, but wholesale customers need flow and replenishment. Now we’ll be able to provide it.”

Morrison, who cofounded Earnest Sewn and Paper Denim & Cloth earlier in his career, was determined to avoid what he viewed as a growing pattern of sameness and duplication in premium denim as he developed plans for a new business. Rothfeld, the former chief executive officer of Sun Apparel Inc., backed the idea of jeans custom manufactured from selvage denim and other top-notch fabrics, trims and findings in an environment where customers could not only choose the components, fits and styles but also witness their assembly.

The setup didn’t come without a steep price tag. However, Cynthia Roe, president of REI and also Rothfeld’s former collaborator as chief operating officer of The Jones Group’s Polo Jeans division, noted that the venture is now on target to pay back the substantial up-front investment and working capital requirements.

“We will break even by the end of the year,” she said. “It’s evolving into a custom/wholesale business.”

With production on Mercer Street stretched to the limit, the firm has turned to a Los Angeles-based denim house to supplement its output and address its additional needs.

The multiple fittings involved in bespoke jeans demand a price of about $1,200, and custom orders based on those patterns range from $525 to $750. But the wholesale women’s jeans will open at about $195 at retail and average about $245 while men’s will open at $265 and average about $285, according to Grayson. Like their custom counterparts, men’s products will revolve around selvage fabrics while the women’s offering will incorporate coated denims and colorblocking, among other treatments.

“Contemporary is leaning towards the designer world,” Grayson added. “Denim needs to follow that. It’s clear that designer looks and quality will flourish in this market.”

The front window of the SoHo location proudly boasts “Made Here.” Morrison asserts it remains applicable to the wholesale expansion and its reliance, as in custom, on “specialized sewing, the finest materials available, an emphasis on quality over quantity and efficiency, and small-batch production, all made here in the U.S.A. under our watchful eye.”

While the privately held firm doesn’t disclose sales figures, Morrison expects the business to become dominated by its women’s element as wholesale expands. Prior to its wholesale introduction, men’s accounted for about 80 percent of volume, a figure that’s fallen to about 50 percent today as women’s has grown. Morrison expects the women’s figure to grow to about 70 percent by the end of the year.

The principals don’t expect the importance of the store-factory idea to be diminished by the acceleration of its move into other stores.

“This is a great transparency mechanism,” Morrison noted, “a place where we can share our perceptions and ideas, show our wholesale customers as well as our custom customers what we’re putting into the project. We love manufacturing inside the store, but there are obviously limits.”

While a smooth move into wholesale is its top priority at the moment, 3×1 hasn’t ruled out a few more brick-and-mortar stores, with an uptown Manhattan location possible.

Its Web site — at 3×1.us — offers an up-close look at the SoHo operation and the rationale behind the brand. It doesn’t, however, offer e-commerce.

“We’re set up to do it, but right now most of our customers want to feel and see the fabrics and trims we work with,” Roe commented. “We will push that button at a later date.”