Despite problematic timing, Japanese trade show organizers are working to prove their pertinence. 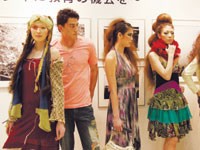 TOKYO — The Japanese fashion industry has always had one big question: “Is it necessary to go to the trade show?”

Until recently, the answer was: “Not always,” especially not if you expected to conduct any real business. After all, Japanese etiquette demands that vendors and retailers first form a close tie, at which point the vendor offers new merchandise without being asked. Rather than place orders at an integrated trade show, buyers typically wait to buy from vendors at their individual exhibitions. As a result, Japanese trade fairs have long been, as one industry executive put it, “a vanity fair, with no practical business talk on the spot.”

But after the bubble economy collapsed in the early Nineties, competition among retailers increased, and they turned to trade fairs for new merchandise that might win over customers.

According to Japanese trade fair organizers, the solution to fending off competitors from abroad and growing their shows at home is to produce the three Cs: “a chance for buyers,” “a challenging stage for young talent” and “creativity.”

One of Japan’s largest apparel exhibitions, International Fashion Fair, now in its 11th season, faces the challenge of becoming a necessary stop for its 600 exhibitors and roughly 30,000 buyers from Japan and elsewhere in Asia.

“IFF is the place where buyers feel each vendor’s trends and business capabilities at once. Actual orderings are done after that,” said Naohiko Kato, general executive director of Japan Fashion Association, which organizes IFF.

To provide better access to young and new independent designers, IFF started the Creators’ Village section, where less expensive booths showcase their merchandise for buyers. The concept featured 150 independent designers — a 400 percent increase over the previous season — at its Jan. 12-14 edition at Tokyo Big Sight. “CV gained a good reputation from both designers and buyers,” said Kato.

One supporter is Masafumi Okada, a 29-year-old designer for MCW who has attended IFF several times in the past. “This year I received many inquires, which can become big business opportunities, even though there are not so many orders on the spot,” Okada said.

The successful CV model may soon be applied to other categories. “Accessories and other goods have also gained popularity in the exhibition, and we are thinking of putting more effort into this section,” said Kato.

Another reason for the lack of order writing at Japan’s trade fairs: the timing. Although exhibitions held in April and October would better coordinate with retailers’ open-to-buys, “In order to hold IFF at the best venue, Tokyo Big Sight, we have to hold the exhibition in July and January,” said Kato.

Despite that awkward timing, the Japan Fashion Association plans to make IFF a hub among other Asian trade fairs and currently organizes an area within competing Chinese show Shanghai Fashion Week. “Of course we have to work harder to be a good competitor of Shanghai Fashion Week. Otherwise, exhibitions, including those of China, will overtake us. But as an exhibition in Japan, IFF will introduce Japanese brands to Asian countries. Each of the exhibitions plays a different role,” said Kato.

The element of cultural exchange takes a different form at D&A Lab, the Tokyo addition to the Designers & Agents roster of New York and Los Angeles shows. The preedited and art-directed D&A Lab brings 50 contemporary designers to Tokyo’s Modapolitica twice a year, in March and September. Organized in Japan by Independent Fashion Cooperative Associates, the show, now in its fourth season, is expected to attract 1,500 buyers and press at its next staging, Sept. 28-30.

Another major trade fair, Frontier, is held five times per year, toward the end of each buying season. Organized by Lock On Inc., the youthful casualwear and accessories show attracts 1,500 to 3,000 retailers from all over Japan. Three editions are scheduled this summer and fall — July 5-7, Sept. 6-8 and Nov. 8-10 — at Yoyogi National Stadium in Tokyo.

“Our exhibition is held at the best time, along with the real business season in Japan,” said a Frontier spokesman. “Buyers are able to order the goods when they have the clearest idea about their budget.”

Started in 2000 with 13 brands from organizer H.P. France, the twice-yearly “rooms” fashion and design collective held its 10th show in late February with 148 Japanese brands, 35 international brands and about 6,000 visitors.

In hopes of attracting these buyers, the Women’s Pret a Porter Association in France has organized 50 of its brands to exhibit at the next edition of rooms, Sept. 13-15 at Yoyogi National Stadium.

According to Francois Loos, the French minister of external commerce, his nation exported only about $256 million worth of its $6 billion ready-to-wear production volume to Japan in 2004. “It is the problem how to access the Japanese market,” he said.

For their part, rooms producers are offering buyers information and advice on how to do business with French vendors. “We are now making guidebooks, including know-how about writing an invoice and calculating retail prices from F.O.B.,” said Mika Sato, chief producer of rooms. “Also, in getting the exhibition ready to expand to the world, we have to get young designers accustomed to normal business practice of the global standard.”

Japan Creation, one of Asia’s largest textiles fairs, is also taking pains to revitalize its exhibition, to be held Dec. 7-9 at Tokyo Big Sight.

According to show producer Mutsuko Tatsukami, plans include better zoning in the venue for visitors, an index corner highlighting the latest trends and a creator’s zone to support small but talented exhibitors. The fair also includes fashion shows, textile contests and collaboration with academic institutions.

The December 2004 staging of Japan Creation featured over 500 exhibitors and attracted more than 58,000 visitors, according to Tatsukami.