More than 100 adoring female fans showed up for a chance to snap a photo with the Maroon 5 singer at a personal appearance in Los Angeles. 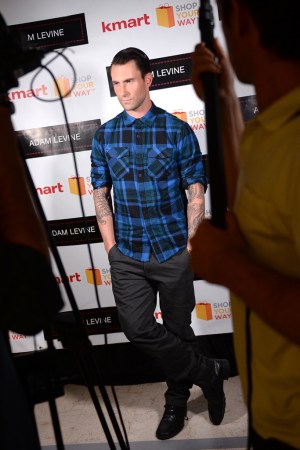 “All the ways you’d think to dress — flashy, flamboyant or typically ‘rock ’n’ roll’ — I like to stay away from that,” said the Maroon 5 singer and coach on NBC’s “The Voice.” “I like things that are basic, simple and timeless that can withstand different generations, that are classic now and were classic 50 years ago.”

That straightforward style philosophy underpins the namesake apparel and accessories collection Levine launched at Kmart on Oct. 1 with a slew of casual staples, including denim, T-shirts, flannels, fleeces, chinos, sweaters, belts and scarves priced from $9.99 to $69.99. On Oct. 24, he promoted the collection here with his first public appearance at a Kmart store, where more than 100 mostly adoring female fans showed up for a chance to snap a photo with Levine.

The enthusiastic turnout corresponds with what Bernt Ullmann, president and chief executive officer of Star Branding and president of Kmart parent Sears Holdings Corp.’s Shop Your Way Brands, described as stellar early results at 500 in-store shops dedicated to Levine’s collection at Kmart. The shops command, at a minimum, around 450 square feet in each location. Among the bestsellers are jeans and fleece blazers.

“The line is tracking well ahead of plan, which is exciting. We couldn’t be happier with the launch and the performance. There is nothing on the floor that is not working,” said Ullmann, who added, “It looks as if Adam is succeeding in driving some new customers into Kmart, which is great, and it also looks that existing Kmart customers are responding, and the reality is that Adam is on television every week. There is huge brand awareness and recognition.”

At Kmart, which is also home to Sofía Vergara’s and Nicki Minaj’s celebrity brands, Ullmann believes Levine’s line could become the biggest celebrity success. His reason is that it appeals to younger men not previously addressed by the retailer. “The white space is for that younger, upwardly mobile Kmart customer that wants a cleaned-up lifestyle product that still has a contemporary feel to it. That’s not really covered on the floor today,” he said. “To that extent, I think Adam has the ability to be Kmart’s Calvin Klein business.”

Ullmann insisted these upwardly mobile Kmart customers respond to the authentic connection Levine has with his brand, and Levine suggested that stems from his participation in the making of the merchandise. “Obviously, we get ourselves in these highly strange situations where someone says, ‘Do you want to do a fashion line for Kmart?’ and it sounds like a great way to make money. That’s always nice and no one is complaining about that, but at the end of the day, do you stand by it? Do you endorse it? Do you support it? Do you wear it? Do you love it? If you don’t love it and you don’t endorse it and support it, it just seems like it’s another income stream and not something you are involved with,” said Levine. “I think sometimes people do phone it in for the paycheck, and there is nothing wrong with that. I just prefer to be involved.”

Although he originally intended to venture into fashion with a higher-priced line called 222, the switch to Kmart made sense to Levine because it opened up his products to a wider audience and didn’t mean he had to forgo creative control. “They allowed me to foster the thing personally. I loved that. There were no politics I had to deal with other than it being this fun, creative thing. It just felt like the right thing,” he said. “I think the prices of things tend to be a bit obnoxious. The things that I like tend to be sometimes unnecessarily expensive, so why not provide an affordable alternative and also have it be something that I love to wear, which is what the line is.”

The healthy sales so far have given Levine and Ullmann confidence that the line can expand to additional categories. Bags, footwear and jewelry will arrive at Kmart doors sometime in the spring, and Levine’s women’s line is slated to roll out April 1 with its own 500 in-store shops at Kmart. Ullmann foreshadowed that the women’s apparel would have a “sophisticated L.A. cool vibe.”

“Recognizing he has a strong female following, we always felt he would be viable in women’s,” he said. “As much as Adam has a strong point of view, he also has a very high-profile girlfriend, [now fiancée Behati Prinsloo, the Victoria’s Secret model], and he is very comfortable in allowing her to have a voice in the development of the women’s line. She too is very authentic when it comes to fashion, obviously.”