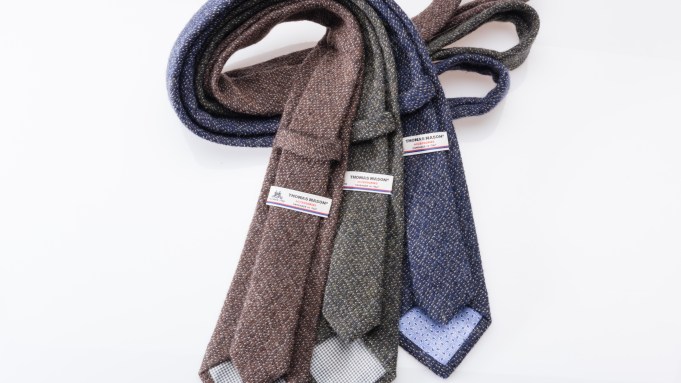 NEW YORK — Albini Group is setting its sights on the U.S.

In a recent visit to New York City to meet customers — both current and potential — Silvio Albini, president, said his goal is to “get closer to our American customers and develop exclusives with them.”

He said in the past, the brand would create fabric collections in Italy and present them to its U.S. customers. But now, “we want to develop product with them and have a much more intimate relationship.”

Albini was founded in 1876 by Zaffiro Borgomanero in Bergamo, Italy. Today, under the fifth generation of the founding family, the business counts customers in more than 80 countries around the world and exports more than 70 percent of its sales volume.

The U.S. accounts for around 12 to 15 percent of Albini’s overall sales. Right now, Italy is its largest market, followed by France and then Spain or the U.S. “They switch season to season,” he said.

“We believe in the American market,” Albini said. “Our designers come here every month to develop exclusive fabrics.”

He said the company has had an office in the U.S. since 2014 and works with a range of brands including Ralph Lauren Purple Label, Brooks Brothers and J. Crew. Most recently, Albini has started working with online businesses such as J. Hilburn, Bonobos and Proper Cloth.

“We have customers from the very traditional to those with a new business model,” he said.

But it’s these upstart brands where Albini sees the most potential. “We want to follow the new business model,” he said.

Made-to-measure is also seen as a growth opportunity and Albini provides fabrics to Individualized Shirts, Hamilton, Alton Lane and others.

The company also works with designer men’s brands, including Thom Browne, as well as denim producers such as AG, he said.

“We already have the best customers and good penetration, but we think it can be more in-depth,” he said.

At the same time, Albini is hoping to expand its reach in the women’s made-to-measure business, which he admitted was “more up and down” than the men’s market.

At the end of 2013, the company expanded beyond fabric for the first time, offering a line of Thomas Mason accessories. The neckties, pocket squares and bow ties are carried at Barneys New York and Holt Renfrew, and the brand will add swimwear for next summer.

“We have no plans for doing that with our other brands,” he said. “But Thomas Mason was the easiest to communicate.”

Albini, who had also served as president of the Milano Unica fabric trade show until last month, said the skill of creating fabrics has disappeared from a lot of other countries but is “still alive in Italy.”

“There’s still a lot of passion in what we’re doing,” he said, pointing to family businesses such as Zegna and Reda. “Our family looks at this long-term.”