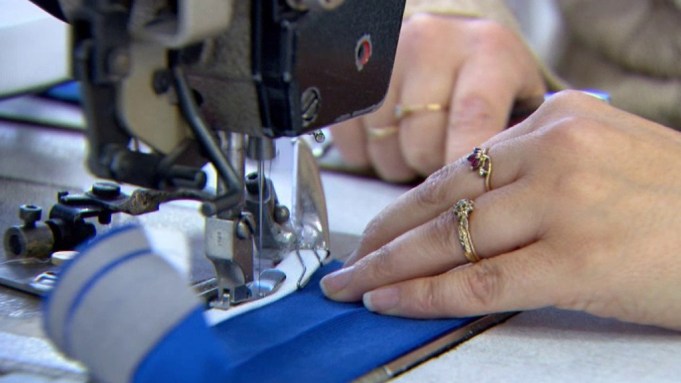 PARIS — No matter who wins the French presidential election, chances are that boosting French manufacturing will be high on his or her agenda.

“There is finally an awareness and perhaps even a political honesty [in taking] on this subject, which only a few years ago neither the left nor the right wing were willing to do,” said Frédéric Arnaud, production director at French contemporary brand agnès b.

Employment in textile and apparel manufacturing in France has been almost halved over the past decade, from 198,000 in 2002 to around 100,000 in 2011, according to figures from trade body Union des Industries Textiles.

“Everyone is in agreement that it is necessary to rebuild the French industry. But it is easier said than done. If we are not given the means to redevelop this industry, we will continue to have a growing unemployment problem,” asserted UIT president Lucien Deveaux.

Unemployment in mainland France stood at 9.4 percent in the fourth quarter of 2011.

The April 3 launch of the Produire en France (Produce in France) club, an association of French manufacturers including textile industry players, saw the support of all the major political parties. According to agnès b.’s Arnaud, this is proof that politicians from across the spectrum are dedicated to finding a solution to the country’s growing dependence on imports beyond the electoral context.

“There is a great fear of the loss of French know-how and being dependent on imports in the long term,” he said.

France’s high employment costs mean that it has been harder hit by the “delocalization” of manufacturing than its European neighbors Italy and Germany. Current proposals to reduce costs for employers, known as the “antidelocalization tax,” proposed by conservative President Nicolas Sarkozy’s government, will be implemented in October if he is reelected.

Sarkozy and Socialist leader François Hollande are slated to emerge as front-runners after the first round of the presidential election due to take place on April 22. The majority of polls show Hollande winning the second-round runoff on May 6, though the Socialists have been wary of crying victory.

The new tax would be imposed on goods bought in France, while the charges paid by employers would be lowered, in principal leading to job creation.

“The antidelocalization tax is good news for us, but it needs to be much higher in order to have a significant effect on the cost of employment,” said Deveaux of the textile union.

While a change in government may mean the tax could be abandoned, Deveaux believes that “there is a certain consensus to reduce the cost of employment.”

French textile production fell 8.8 percent in the fourth quarter of last year compared with the third quarter, according to statistics from the French Directorate General for Competitiveness, Industry and Services.

The textile industry overall may have lost revenues and local production in recent years, but the country’s luxury goods industry is thriving.

“We are a growth sector, we bring a certain richness to our country, we add jobs and ensure the continued existence of industrial sites,” said Elisabeth Ponsolle des Portes, president of French luxury goods association Comité Colbert. “In this election campaign, there is much talk of ‘Made in France.’ We are satisfied by the recognition of the importance of French manufacturing.”

“Clearly, Made in France is an essential element; it’s part of our success,” he said. “Customers in emerging markets are looking for products that are labeled Made in France.”

Manufacturing in France is one of the key issues in the French presidential race. Business leaders have traditionally been close to the conservative Union Pour Mouvement Populaire — indeed, Bernadette Chirac, wife of former president Jacques, sits on LVMH’s board.

But the people of France are traditionally against big business and the high salaries of company heads. The majority of the French population has seen its spending power shrink since the introduction of the euro, and cannot afford luxury products, made in France or otherwise.

In this context, Socialist party candidate Hollande’s suggestion of a 75 percent tax rate for salaries above 1 million euros, or $1.3 million at current exchange, has garnered wide support.

Rhetoric against big business is common to several of the presidential candidates, with far-left newcomer Jean-Luc Mélenchon, whose popularity has risen above that of far-right Front National candidate Marine Le Pen in the polls as the election approaches, promising a rise in the minimum wage and a cap on salaries at 360,000 euros, or $471,575 at current exchange. Le Pen, meanwhile, is promising to revise taxes, notably increasing those for CAC 40-listed firms and reducing them for small and medium-size enterprises.

The important role French manufacturing was to play in the campaign became clear even before the candidates officially declared their intentions to run for office.

When bankrupt lingerie manufacturer Lejaby’s new owner revealed in January that the group’s remaining French factory would close, both the UMP and Socialist parties stepped in to try and find a solution for its workers.

The case became an example of how the economic climate could be used to win political brownie points. In the end, it was the UMP that found a buyer in Louis Vuitton supplier Sofama, which promised to retrain the workers and ensure them continued employment — in luxury leather goods, rather than the lingerie that some skilled workers had been making for around 40 years.

Despite the jobs having been saved, workers union representative Bernadette Pessemesse issued a public statement to Sarkozy in early March making it clear that the firm’s employees held no illusions about why the government had stepped in just a couple of months ahead of the election.

“We have not forgotten the total inaction of the president in 2010 when 197 workers at other Lejaby sites were laid off,” she wrote.

Lejaby’s case — with the workers being retrained to make luxury leather goods — highlights that while manufacturing luxury in France is profitable, and essential for brand image abroad, it is more difficult to argue the financial case for French industry in lower-margin segments.

This means that without action to boost local industry, many in the sector believe French apparel manufacturing is on its last legs.

Agnès b.’s Arnaud said he believes that if nothing is done to preserve the country’s age-old skills, within 10 years certain professions will have disappeared, with the aging workforce unable to pass on knowledge to future generations. “It is not protectionist to defend values and skills that are hundreds of years old,” he said.

“The problem is not finding people to come into the profession, it is that people are worried that the textile industry does not guarantee them jobs. We will find people if we offer them work that is interesting and pay them correctly,” Deveaux added.

While the political issues involved are domestic, the impact of them is global. Exports represent up to 85 percent of business for some French brands, particularly in luxury goods.

“How can we sell a French middle-market or high-end product that is made in China to Chinese consumers?” Arnaud asked. “At agnès b., 40 percent of our production is guaranteed 100 percent made in France by French manufacturers. Agnès b. is not a luxury brand, and we are not obliged to do this. It is an engaged choice on the part of the brand to decrease its margins in order to be able to manufacture in France.”

But the philanthropic approach is unlikely to be sufficient to rescue French industry.

“We will not regain significant industry in France unless we have comparable social charges and salaries at least throughout Europe,” Deveaux said. “That does not depend on industry. It depends on political willpower.”