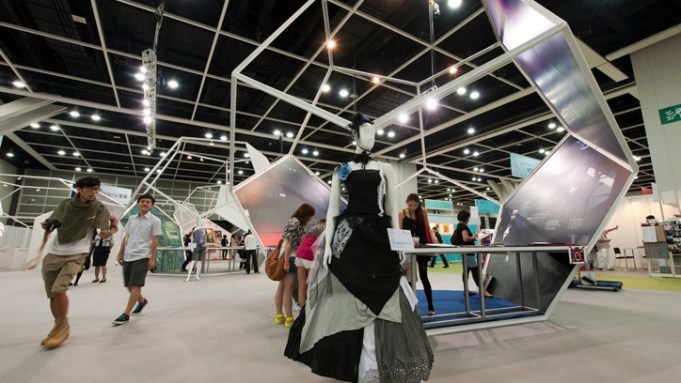 HONG KONG — Mills exhibiting at the Interstoff Asia Essential textiles show were hopeful that a rebound was in sight after stronger interest from buyers and marginal improvements in order writing.

The fair, which featured 235 exhibitors from 12 countries, completed its three-day run here on Friday.

“We have had to lower our minimum orders, as buyers are working with a limited budget so they only want to spend on what they need,” Oh said. “Nonetheless, interest in comparison to previous fairs this year seems higher, so we are hopeful that things are looking up. Next year, we plan to expand into the Middle East. Growth is not as slow there as it has been for the European and American markets.”

While modest signs of progress are beginning to show, a full recovery remains uncertain and it continued to be a buyers’ market.

Georgie Stanistreet, women’s wear designer at Apparel Group, said the strength of the Australian dollar has given her greater purchasing power, especially when dealing with suppliers that have priced their products in the weaker U.S. dollar.

Traditional fabrics such as jacquards and tweeds were abundant, as were silks and satins with floral prints in bold, eye-catching colors.

Felix Chung, chairman of the Hong Kong Apparel Society, said cost control measures will not be enough to surmount the economic challenges. Chung stressed the importance of being able to offer customers new products during a panel discussion on how the industry should manage its way through the downturn.

Eco-fabrics remained in the spotlight as retailers and consumers seek to ride the green movement. Roslyn Chen from Taiwan-based Premiere Fashion Corp, which supplies Swiftex and stretch fabrics to The North Face and New Balance, said the firm’s recycled polyester made from PET bottle flakes is still popular.

“It costs 30 percent more to produce than normal polyester, so cost-conscious customers might avoid going this route, but things are beginning to pick up,” Chen said. “Right now, we’re pushing a new fabric which is water resistant on one side and [has] wicking on the other. We’re hoping to expand in the water sports, biking and yoga markets.”

At Huntsman Textile Effects Co., a dyes and chemicals manufacturer based in Basel, Switzerland, the development of sustainable technologies is part of the company’s long-term strategy to widen market share and to stay ahead of competitors. Next year, the company plans to launch a gentle powder bleach that can replace harsh chemicals and allow for lower processing temperatures.

Martin Szeto, Huntsman’s global business development director, said he doesn’t see a full recovery until the end of next year or start of 2011.

“There has been lots of talk of an economic recovery, but for us, business is still slow,” said foreign trade manager Seamus Zheng of China-based Hengxin Textiles Printing & Dyeing Co. “Yes, there has been a boost in the demand for basic items, but this isn’t a good indication of the overall market. If there is more money out there, then buyers would be looking toward more luxurious fabrics. Generally, I think business will improve slightly next year, but will not increase by a drastic amount.”