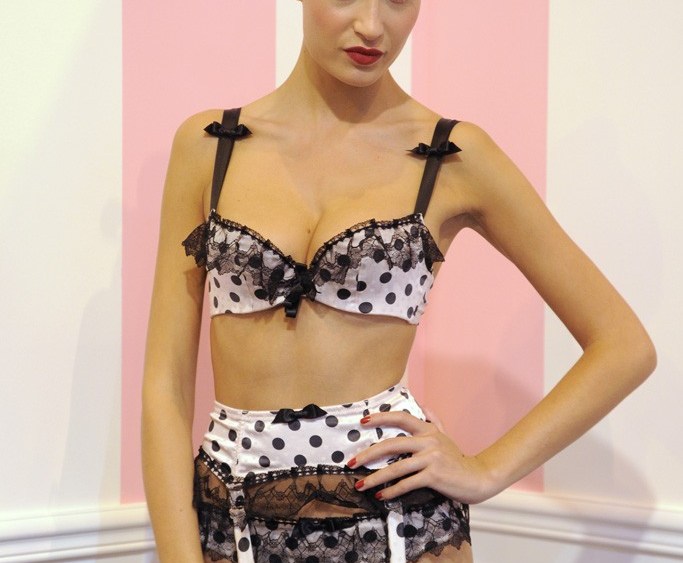 An increase in buyers from new and emerging markets compensated for a slight downturn in French attendance. Notably, Russia and China for the first time made the top 10 ranking for international buyers, coming in at seventh and ninth place, respectively.

The three-day events wrapped up on July 9, drawing 15,324 visitors versus 15,209 last July.
Molding the offer to fit buyers’ expectations was the strategy for exhibiting brands who used different tactics.

“Brands are either sticking to low-risk basic offerings or going to the other extreme and presenting something quite extravagant,” said show director Séverine Marchesi.

White and nude tones were key for lingerie. Brands stuck to a traditional feminine aesthetic while concentrating on the changing body shape of the end-customer. Bigger bra-cup sizes were available from a majority of vendors, often targeting young women. A prevalence of contemporary shapewear designs also reflected growing demand from a new younger customer, with a majority of the traditional brands integrating body-enhancing technology into their collections.

Swimwear was bright and busy, with prints going from animal to Aztec found alongside neon details, fringing and sequins. The ethnic theme continued, becoming more elaborate with woven and braided fabrics.

Several executives at swimwear brands cited good business in Europe and said Asia was not yet a focus.
“As a leisure essential people aren’t sacrificing beachwear in the same way they are ready-to-wear,” said Bernard Donati, ceo of Monaco beachwear brand Banana Moon.

Meanwhile, despite the upbeat attendance figures quoted by show officials, some exhibitors complained there were few American retailers.

“The Americans haven’t come,” lamented Alain Provost, ceo of Maison Lejaby (formally known as Lejaby). At a press conference during the event he signed a first order with a new French cooperative of corset makers. The group will supply Maison Lejaby’s just-launched luxury handmade lingerie line.

First-time U.S. exhibitor Naked Princess embraced the fair, mentioning Russian multibrand swimwear retailer Paris-Club and Symphony Mall, Dubai, among new contacts. Based on the idea of sensual comfort, the brand’s feminine offering included bras without underwire and the use of soft Modal fabrics. “We’ve come to see how the product and the brand ethos work in Europe and the Asian markets,” co-founder and chief creative officer Becca Frank said. She was sourcing fabrics at the adjoining fair Interfilière.

Fellow American newcomer, California swimwear brand 1 Sol — which presented one of the standout “all ages” collections of the show with asymmetric double-lined and ruched one-pieces and bikinis in retro pastel Aztec prints — had seen buyers from Germany, Dubai and Switzerland. On the lookout for French agents, ceo David Shalom said “buyers were tough about opening accounts with new suppliers.”

Adjoining textile fair Interfilière was all about added value through innovation, with a conference dedicated to cosmetic textiles, which are said to have skin hydration or slimming properties. Shapewear fabrics were also key for lingerie and swimwear.

Invista unveiled Lycra’s new global marketing campaign for swimwear and Xtra Life Lycra fiber called Unstoppable at the fair. Riding high on lingerie’s bubbling shapewear market, Lycra said the category also is growing in swimwear. Among innovations garnering buzz at the fair was a new Lycra fiber with a technology dubbed W that is resistant to yellowing or color bleeding caused in the production process. Already adopted by several fabric producers it will be available to consumers next season.

Italian brand Save the Queen won the designer of the year award for its beachwear collection in muted tangerine and khaki with digital prints of hand-drawn underwater scenes. Designer Elena Fantini was impressed with the “amazing” organization of the fair, which included a private party on Saturday evening with a white and gold dress code for 1,360 guests at the historic Hotel Salomon de Rothschild in Paris.

French designer Chantal Thomass, whose namesake brand changed hands from French groups Dim to Chantelle last year, noted a lack of French and Chinese buyers. “It is more pleasant to show to buyers at an off-site location, but being part of the fair allows you to show the collection to unknown buyers,” she said, noting that off-site showings could take three hours out of a buyer’s busy schedule. Showing an extensive range of her signature feminine retro aesthetic of light pink contrasted with black, Thomass’ designs included high-waist shapewear pants with bow-tie motifs. She had added cup sizes up to E.