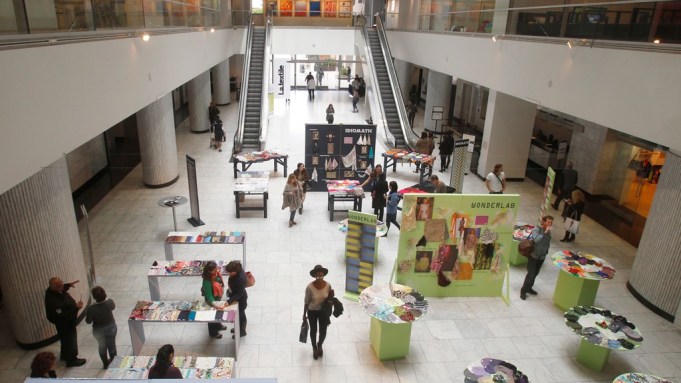 Atlas International Textiles, a Middletown, N.Y.-based company that sells Italian-made fabrics, attracted attendees to its booth by advertising that it sets no minimum for orders.

Maria Wojciechowski, designer of Los Angeles-based eveningwear brand Maria Bianca Nero that retails for $400 to $500, said she is willing to pay upward of $35 a yard for fabric as long as the mills allow her to place orders for as little as 300 yards. Since she produces her line in Los Angeles, she can complete orders within four weeks and so expects mills to make their shipments of fabrics and trims quickly, as well. For the European mills that need extra time to make and ship materials, she has had to work around the time restraint.

“I’ll put it in the line, but with a later delivery to have time to track to see how much I’ll need to buy,” she said.

Sustainability was also a key issue. Exhibitors such as Danfield Inc. that combined eco-friendly processes with trends did well. The City of Commerce, Calif.-based leather purveyor offered skins dubbed EcoHides that were tinted bright red and deep green through the use of waxes and natural vegetable products. Prices start at $6.75 a square foot.

Hand craftsmanship appealed to buyers, especially if provided at a reasonable price. K & I Kosha Collections packed its booth with designers who liked its cotton ikat fabric handwoven in India for $8 to $12 a yard. The minimum requirements of five yards for sampling and 200 yards for production were also regarded as favorable among designers.

K & I was one of the Indian vendors that the trade fair was promoting to diversify its offerings. Show organizers also congregated 19 exhibitors in the Lenzing Pavilion, 18 booths in the Korea Pavilion and nearly two dozen brands in the European Collections Pavilion.

Malhia Kent, a first-time participant from France that showed in the European section, marked a steady flow of customers who liked its bright pops of orange, pink and green, often in fluorescent hues. A particular sample, priced at 30 euros, or $39 at current exchange, a meter for 500 meters, featured a rough weave of six different yarns in hues such as yellow, teal, pink and orange.

The recent enactment of the free trade agreement between the U.S. and South Korea contributed to bustling activity at the Korea Pavilion sponsored by the Korea Textile Trade Association.

Korea’s O.N.K. Co. made its debut at the textile fair with fake fur fringe made of a polyester and spandex blend that was dyed copper and black or printed ombré-style, and selling for around $7.30 a yard. The U.S. represents 20 percent of its business and the company hopes to increase that share to 50 percent.

On the other hand, Harry Tae, director of Hyo Chang Corp., which specializes in spandex velour priced from $2.80 to $4 a yard, doubted that the free trade agreement will swell business greatly for him because the Korean companies were all targeting the same customers, who have limited budgets. The U.S. already constitutes half of Hyo Chang’s business.

The resurgence of demand for products made in the U.S. is giving a boost to Texollini, which manufactures burnout fabric designed to look like eyelet and other circular knits made of fibers such as Modal and cotton in Long Beach, Calif. Prices range from $2 to $15 a yard. Daniel Kadisha, Texollini’s president and chief executive officer, said his customers place importance on delivery time, quality and creativity, “especially with what’s happening with the import market, the import is more expensive [than the domestic product].”

Eleanor Haycock, a sales representative at Laguna Fabrics in Los Angeles, reiterated that a lot of companies are returning to the U.S. to find sources for textiles. Some of the company’s standout products included a linen and Tencel sweater knit composed of stripes in two different gauges, priced at $3.75 a yard.

“Hitting the price points can be a challenge,” she said, noting that many customers are budgeting less than $3 a yard for fabric.

Laguna Fabrics has implemented creative measures for reaching compromises with designers, she noted.

“We’ll switch out yarns for them, like rayon instead of Modal, or switch to a lighter weight,” Haycock added. “We work with our customers.”