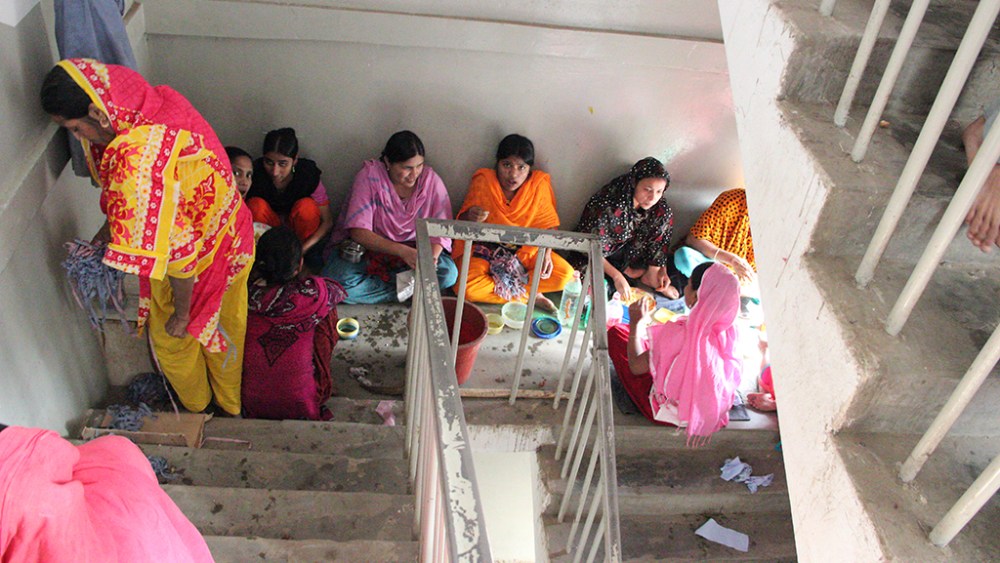 A report about the Bangladesh apparel industry unveiled last week by New York University’s Stern Center for Business and Human Rights has been causing indignation in Dhaka.

While Commerce Minister Tofail Ahmed asked the local media not to carry the report, the Bangladesh Garment Manufacturers and Exporters Association called a press conference to express its disagreement with the numbers cited. The report lists more than 7,000 garment factories, almost double BGMEA’s estimates. It also lists seven million workers in the industry, which is three million more than current figures.

After the collapse of Rana Plaza in April 2013, in which more than 1,130 garment workers were killed, the Bangladesh industry has worked toward determining the exact number of apparel factories. Earlier BGMEA estimates of 5,000 factories were fine-tuned to about 3,500; the same figure is cited by the International Labour Organization and Bangladesh government spokespersons.

Estimates from the Bangladesh Accord for Fire and Building Safety and the Alliance for Bangladesh Worker Safety, the two groups of global brands and retailers formed to help improve safety in the garment industry initiated by more than 200 foreign brands, also have discussed similar numbers over the past two years.

Bangladesh is the second-largest producer of garments in the world after China, with apparel exports of $24.5 billion in 2015. The industry employs more than four million workers, according to BGMEA estimates.

“We’ve used their own data, going through all the public data about all the documented factories and have put them on a map,” Sarah Labowitz, codirector of the Stern Center for Business and Human Rights and coauthor of the report, told WWD.

“I have been to Bangladesh five times during the course of the survey and met BGMEA many times. The question keeps coming up, ‘How many factories are there, really?’ The research is based on public data from the BGMEA, BKMEA [Bangladesh Knitwear Manufacturers and Exporters Association], the government, the Accord and the Alliance. If the data is wrong, we would encourage them to prove us wrong, to do their own studies, to publish better data,” she said, while talking about the process of research, and the desire to see Bangladesh succeed and work toward the best possible situation.

The report, titled “Beyond the tip of the iceberg: Bangladesh’s forgotten apparel workers,” brought the issue of subcontracting into sharp focus, describing subcontracting factories as “in the shadows.” It noted that half of these factories are small and medium-sized indirect sourcing factories, meaning their workers produce for foreign brands through other, larger factories.

BGMEA president Siddiqur Rahman told WWD that he “completely disagreed” with the numbers listed in the report. “We know that there are approximately 3,500 garment factories listed. The report has listed smaller tailoring units for the local market in their list — these are not factories, but rather small compact units of one or two sewing machines sometimes. These cannot be counted with production for global brands,” he said.

As for subcontracting, Rahman said that over the last two years global vigilance had grown “so greatly that illegal subcontracts were not happening.”

“The increased connectivity and check-back by global brands after Rana Plaza has made illegal subcontracting all but impossible,” he said, adding that manufacturers now have to inform their buyers about every step of their production process such as cutting, sewing, washing and even packing.

Labowitz pointed out that the numbers in the Stern report are based on a “comprehensive analysis of publicly available factory information in Bangladesh, as well as an on-the-ground survey of two subdistricts in Dhaka. In the June 2015 survey, 32 percent of the 479 factories surveyed were informal subcontractors.” They do not register with the government, either of the two national trade associations of apparel manufacturers, or foreign brands, she said. The report added that 91 percent of informal factories produced at least partly for export.

A map displaying where garment factories are located and how many — or how few — factories foreign brands acknowledge as part of their supply chains has also been created as part of the report.

“Our position has consistently been that subcontracting is not a bad thing. It enables efficiencies; it has enabled Bangladesh to be so productive and so cheap. But the cost of that is that there is very weak enforcement in the indirect part of the sector,” she said. Most of the enforcement has been in bigger factories, she said.

“In my view, this is an opportunity for leaders within BGMEA and Bangladesh to look more broadly at the problem and think about how to solve it. The global brands also have a responsibility. I think they have also made this more difficult by making it clear that subcontracting is not a problem or that they have got it under control. They should also acknowledge that they have benefited enormously from the lack of oversight and the artificially low cost from subcontracting, because it doesn’t require compliance,” she observed.

When contacted, Alliance spokesman Guillermo Meneses said that based on their research, they agreed that “there are approximately 3,500 operating export garment factories in Bangladesh. Currently, 20 Alliance factories have completed their corrective action plan [CAP] verification efforts. We expect 20 additional factories to be fully verified by the end of January,” he said.

The report also noted that while global brands, governments in North America and Europe, and international lenders have unveiled commitments of more than $280 million for the garment sector in Bangladesh, to date only a handful of factories have been fixed.

“They acknowledge that fixing factories is taking a very long time, so we pointed out that there is a fundamental tension that BGMEA has been very vocal about, that is ‘Who pays for fixing the factories?’ I don’t think the Accord and the Alliance have fully reckoned with that,” Labowitz said. “The lack of priority of who pays has been a subject of deep contention. It is what we would call a stalemate. So as a result of that, factories aren’t getting fixed.”

Meneses said factory remediation is a “timely and costly endeavor, and there are many factors that can further prolong the process.”

“Vital safety equipment that meets international standards must often be imported, which can take several months. Structural retrofitting, which is required for many factories, often takes more than one year to complete. And qualified contractors and installers are limited in Bangladesh, so factories often face delays as they wait for skilled labor or face redoing work that was performed incorrectly. That’s why we place such an emphasis on working with all factories to make sure repairs are executed correctly the first time. Our insistence on quality control helps to save time — and lives — in the long run,” he said.

Labowitz commended the fact that the Alliance had helped make financing available, but noted that many factory owners said the regulations have made it “very difficult to access the funds.” The fact that the new numbers in the Stern report indicate that the Accord and the Alliance encompass only 27 percent of factories in Bangladesh also leaves many more factories without any financial and physical safety features, she said.

Emphasizing a “shared responsibility model” for the road ahead, the report noted that the research included was an “important step in gaining greater understanding of the true size and complexity of the apparel supply chain in Bangladesh.”

“It is incontrovertible that the supply chain is bigger, more complex, and contains greater risk for more workers than previously imagined. New ways of thinking and acting are needed to ensure that all factories provide employment in safe conditions and with the dignity of work for all workers,” it pointed out, making a few consolidated recommendations.

These include acknowledging the full scale and complexity of indirect sourcing, a plan to formalize and regulate indirect sourcing factories and for the convening of an international task force to develop and underwrite a comprehensive road map for a safer and more sustainable garment sector in Bangladesh. The entire issue is highly dependent on enforcement eventually — by global brands, the government and organizations such as BGMEA and ILO.