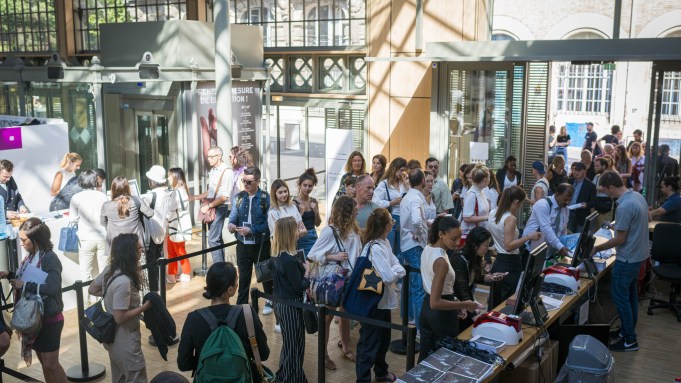 PARIS — While many midmarket fashion brands continue to struggle, high-end labels and the “slow fashion” movement are bucking this trend and driving growth, according to weavers, tanners and accessory manufacturers at the recent Blossom Première Vision trade show here, which targets the pre-collections market and is for many brands the starting point for their fabric research, in this instance for fall 2020.

Traffic at the seventh edition of the show, held July 3 and 4 at the Carreau du Temple in the upper Marais, grew 3.5 percent to 1,311 attendees, with some 81 percent of visitors hailing from France.

“The era where people wanted fast and flirty fashion is over, there is a return to quality cloth,” said Laurent Garrigue, owner of the U.K. mill of the same name. “The rich segment of the market has become exceptionally good worldwide, and there is a need for more exceptional fabrics because they have to differentiate,” he added, saying the firm has seen an uptick in demand as the weak British pound makes his pure wool products more competitive.

Rather than focusing on trends, exhibitors at the show were highlighting their latest developments, with innovations in sustainability especially prevalent. “I think this season will be the tipping point,” said Première Vision’s fashion director Pascaline Wilhelm. “We can no longer create clothes without thinking about it, the fashion profession is really changing. Fast fashion has reached its limits. Quantities are smaller, and the industry is adapting to this. It’s a new industrial revolution.”

Wilhelm pointed out the creative possibilities opened up by more sustainable developments — plant-based tanning processes, for example, are opening up a new color palette, notably of paler pastel shades, that it was not previously possible to create with chrome, she said.

Among the environmentally friendly options on show, Italy’s Marini & Cecconi presented a cashmere yarn made from recycled garments, which as well as contributing to the circular economy, is 30 percent cheaper than virgin cashmere at around 80 euros per meter. The company has invested heavily in its sustainability initiatives over the past two years, and is reaping the benefits of this, said Marini Industrie owner Francesco Marini. “Traceability has become very important,” he commented.

Designer Martin Grant was one shopping for sustainable options. “Langioli has a whole section of recycled fabrics that I like,” he said. “It’s important, even on a personal, ethical level.”

Tissages Perrin — a high-end silk and jacquard specialist based near Lyon — earned the Global Organic Textile Standard certification for its silks six months ago. “This allows us to offer our customers 100 percent organic silk for plain fabrics,” explained company copresident Jean-Hugues Perrin. “Sustainability has really moved on now from a marketing discussion to something that is truly being implemented.”

Among new developments, Italian jersey maker Jackytex debuted an organic wool/polyamide blend with the effect of shearling, as well as a new membrane for bonded materials made from glass with an iridescent effect that changes aspect according to the base used, allowing a broad range of creative effects.

“Customers are increasingly looking to push prices down in order to increase their margins,” said Corrigan Smadja. In order to help reduce costs for a brand’s choice of fabric, for example, “we would remove the Lurex thread in a fabric they choose in order to keep the price down,” she said.

“The market is tough, but it’s tough for everybody,” said Jackytex’s owner, Piero Giachi. “If you propose something different, it works.”

“We are impacted by the global political climate, for example Chinese tensions with the U.S., and we are buying less as a result,” said Ayse Ege, brand manager and cofounder of Dice Kayek.

In terms of trends, metallics and fluorescent colors remained strongly visible on many stands.

Corrigan Smadja confirmed that the tweed specialist had seen strong interest in combinations of black and gold as well as its animal-motif fabrics. “Everything that looks quite rich,” she summed up. Tissages Perrin had also observed strong interest in its high-shine fabrics, said Perrin, who is anticipating a stable year ahead. “2019 will be a good year overall, we are not expecting any catastrophes, but no major euphoria either.”

“The season feels very luxurious,” observed Eleanor Sinden, a footwear designer for L.K. Bennett. “There are some really lovely metallic, velvets and silks.”

But certain designers were looking for more minimalist inspiration. “There’s a lot of shiny, metallic and iridescent stuff, but that’s not really our thing,” observed one designer for a major U.S. label.

“The demand for color mixes has toned down a little,” confirmed Wilhelm. “There is fantasy in the collections, but it’s more discreet,” she said, as designers continue to shift away from streetwear and toward more structured fabrics.

David Ballu, Lutz Huelle’s president and research and development director, observed “a return to something bourgeois chic, but a little bit quirky. We’re moving a little bit away from trash. I like the wearable colors, they’re more realistic,” he said. “We’re looking for gentle colors, and there are a lot of blues and off-whites here.”

Ballu said he looks for smaller suppliers where co-creation is available. “With the bigger mills, that is more difficult,” he said, highlighting France-based FCN Textiles as one example.

Among technical developments, French shearling producer Rial 1957 was showcasing its digital-printed leather capabilities, which offer new creative avenues for brands, who can send their own designs to the producer for printing.

Certain exhibitors remarked growth in the number of accessories designers visiting the show. “Now that exotic skins are phasing out, brands are looking towards fabric,” observed Garrigue. “It’s a lot cheaper and it allows them to offer something different and generate newness.”

LK Bennett’s Sinden confirmed this shift. “We’ll be using a lot of the ready-to-wear fabrics on our bags and shoes,” she said. “We’d like the accessories part of the show to grow, as Lineapelle is too late for us.”