The quickly growing brand is branching out. 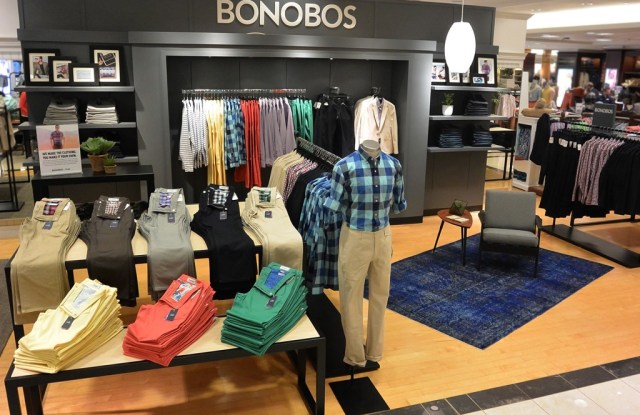 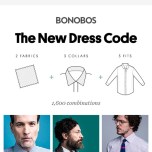 Bonobos proved to be a brand on the move this week, kicking off a retail partnership with Belk and making some fresh additions to its shirt business, a category coming into its own at a company built on bottoms.

Belk opened seven shops-in-shop dedicated to the brand, including a 550-square-foot space adjacent to Vineyard Vines and across from Ralph Lauren at its Southpark Mall store in Charlotte, N.C. Bonobos’ other Belk outposts are in Raleigh, N.C.; Atlanta; Birmingham, Ala.; Huntsville, Ala., and Nashville. Another shop will open in Dallas in April.

“We were thoughtful in terms of distribution — it’s the eight best locations,” brand president Brad Andrews told WWD. “It’s a chance to work with a great partner, but it gives us exposure to a region that we’re a little underpenetrated in, which is the South.” He said the shops-in-shop would help the brand bring in new customers and provide insight into where the company might someday open its own stores.

On a national scale, Nordstrom is still Bonobos’ largest wholesale account. The retailer invested in the company in 2012 and will carry it in all of its 117 full-line stores by this summer.

The two department stores carry different assortments of the brand. Nordstrom is more item-focused and started with a few key pieces such as the chino and Weekday Warrior pants and has since added woven shirts. Belk carries more of a “collection,” and Andrews likens the variety available to consumers as a mini version of bonobos.com or one of its Guideshops.

The company also launched the Dress Code marketing campaign on Thursday, adding “slim tailored” shirts to its offerings, which already included standard and slim fits. Each of the three cuts has three collar options — the point, the semi-spread and the spread — as well as two fabrications, the $98 wrinkle-free Daily Grind and the $138 Americano (all fabric from the latter comes from Italian mills).

He pointed out that the category went from 10 percent of the overall business in 2010 to 25 percent in 2013, and projected that shirts will become a third of the business this year. Pants, the foundation of the company, went from 70 percent of sales in 2010 to 45 percent last year as the shirt business grew. Last year, casual woven shirts, sweaters and dress shirts saw sales growth of 180 percent, 170 percent and 130 percent, respectively.

Dress shirts accounted for a relatively small portion of the business last year — just a quarter of the size of casual shirts — but Dunn and Andrews expect that to change. The company estimates sales for dress shirts will multiply three-and-a-half times in 2014, while the suiting and blazer business doubles, with an emphasis on slim suiting. The brand declined to comment on projected sales overall.

“From a strategy standpoint, you can count the powerful men’s wear brands that are relevant for casual and tailored [clothing],” Andrews said. “This is the year we ‘show up.’ It’s been a good business for us, [but we’re] trying to make it a great business.”