Tennis legends to introduce a men’s underwear collection under their own names at Wimbledon Friday. 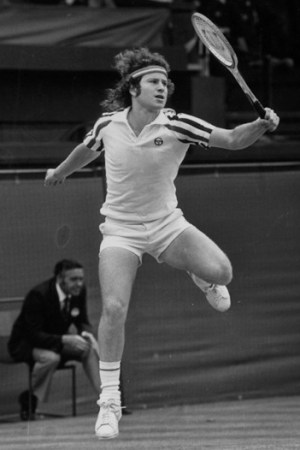 Longtime rivals and grand slam champs Björn Borg and John McEnroe will be lending a new thrill to Wimbledon fans Friday: their own underwear line.

The two tennis legends will officially unveil their collaboration at a press conference at Wimbledon during this week’s matches, saying they have joined forces to launch a limited edition collection of men’s underwear that will bear their signature names. This will be the first time that a name other than Borg’s will be featured on his 22-year-old underwear line.

The collection is inspired by the Golden Age of tennis in the Eighties — when Borg fought off McEnroe in the classic 1980 Wimbledon final that remains one of the highest-quality clashes in the tournament’s history. The line, which will be introduced at retail in August for fall selling, will consist of 100 pieces of men’s underwear embellished with the signatures of Borg and McEnroe. There will be four underwear styles, two designed by Borg and two by McEnroe. The underwear will be available in 17 countries including Europe, Canada and the U.S. as well as at bjornborg.com. Suggested retail prices have not been finalized.

“I loved the idea as soon as I heard it. It’s an opportunity to once again team up with John and beat him on new grounds,” Borg jokingly said.

Borg became a fashion entrepreneur in 1989 when he created Björn Borg underwear. The Stockholm-based $370 million Björn Borg AB, which includes fragrances, accessories, shoes and sportswear licenses, as well as 36 stores and franchises, went public in 2007. In addition to Sweden and the Netherlands, the underwear brand began selling in the U.K. in 2006 in 120 in-store shops at stores such as Harvey Nichols, Selfridges and Urban Outfitters. Borg said he sought to start his brand with underwear because he envisioned a functional fashion product that would address his lifestyle needs, especially as an athlete.

As for McEnroe’s involvement with underwear design and its connection to tennis, he described his collaboration as having “my feel to it.”

“This is sort of a fun company…it kind of reminds me of the beautiful [tennis] clothes and old school short shorts we wore. Those were the fun days,” said McEnroe, who is currently featured with Borg in HBO’s “Fire & Ice,” a documentary chronicling the rivalry between the mercurial McEnroe and the stoic Borg.

“Tennis really grew in the Seventies, and Björn was a big part of that, and in the late Seventies I got into the mix.…Those were the Golden Years and there was a lot of personality in the game. But the game has changed a lot, everybody and the professionalism of the sport. Björn was one of the few people I got along with on and off the court.…We weren’t friends immediately. I looked at him from a distance as a kid, but once we got together in social situations, he actually took me under his wing and certainly gave credibility about me as a player,” said McEnroe, who has been a sports commentator for grand slam tennis matches for NBC and the BBC since 1991.

Asked if he designed the underwear bearing his name, McEnroe replied, “Over the years, Björn has been nice enough to bring me the newest underwear designs. I thought this [project] would be a fun thing, but I didn’t realize we would be doing something together. And then the agents became involved because of the anniversary…and I thought some money will go to charity and it will be a win-win situation.”

In addition to 4 percent of sales being donated to the John and Patty McEnroe Foundation — which in turn will benefit charities including Beyond Nuclear, Laureus USA, The Sean Penn Haiti Foundation and Riverkeeper — the collaboration will include an online charity auction that will auction off eight pieces of Borg and McEnroe tennis memorabilia as well as one hour of ball time with each tennis icon. The auction begins Saturday at bjornborg.com.

Regarding what the underwear styles look like, McEnroe said, “One [style] is colorful and the other is tighty whitey.…I wear short boxers myself.…I think it’s good to express yourself with fashion. I thought the [tennis] clothes we wore back in the day were great. I always liked the short shorts, but nobody seems to agree with me.”