Over 800 brands crowded the buzzing show, with pillar companies like J Brand and Lacoste pointing to impressive sales jumps in the past year. 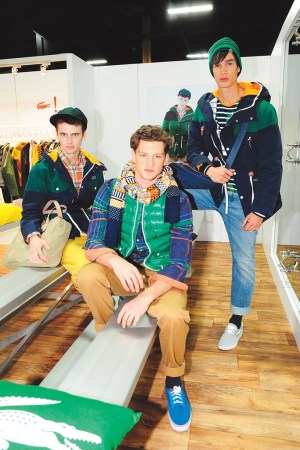 Men’s sales at J Brand grew 50 percent last year while women’s grew 30 percent, although men’s still represents just five to 10 percent of total sales. “Retailers are looking for newness — but it has to be wearable. Just because something is new is not a reason to do it,” added Rudes, who is cautiously testing the waters of women’s ready-to-wear this spring — but holding off on men’s sportswear for another few years.

For fall, J Brand highlighted printed men’s styles, like a micro-houndstooth pattern on twill jeans, as well as autumnal hues on stretch denim, such as olive, rust and timber. The company is designing a new shop-in-shop concept that will open in Liberty in London, Tsum in Moscow and Harvey Nichols in Istanbul in the next two months, with 100 corners to be installed globally within two years.

There are no near-term plans to open freestanding J Brand stores. “Why compete with our best retailers?” noted Rudes.

At AG Adriano Goldschmied, sales were up more than 40 percent in 2011, with men’s comprising a hefty 35 percent of sales. Printed glen plaid and minicheck patterns livened up stretch sateen jeans, while floral prints softened military-style pants. Microsanded twills and yarn-dyed chinos rounded out the nondenim mix. “Retailers continue to look for alternatives to jeans,” explained Sam Ku, design director at the Los Angeles-based brand. Within denim, laser treatments and Tencel blends were key characteristics of the fall lineup.

“The higher end of the market has fared well and we have a very loyal customer,” said Barry Miguel, president of Seven For All Mankind, a unit of VF Corp., of the continued strength in premium denim.

Overdyed twill, coated jeans and jean jackets, and shades of brown and green were highlights of the Seven For All Mankind fall assortments. New slim fits for guys with athletic builds and a dry process finish, called Alchemy, rounded out the newer offerings.

Lacoste’s U.S. sales were up more than 30 percent in 2011, including a more than 50 percent gain on its e-commerce site. It’s trendy Lacoste Live brand has scored especially strong sell-throughs, but the company plans to keep the sublabel below 15 percent of sales to maintain its brand equity with younger, fashion-conscious consumers.

The brand will open a new 6,000 square foot store on Miami’s Lincoln Road by September, taking over a location occupied by French Connection. Lacoste will close its store in the Bal Harbour Shops, another Miami-area location, at the end of this month. “We like the energy of Lincoln Road. Bal Harbour has gotten very luxury and specialized and we are a premium commercial brand,” explained Birkhold.

Istanbul-based Mavi is reinforcing its efforts in the U.S. market after several years of languishing sales, even as its global sales jumped 30 percent in each of the last four years. Company ceo Ersin Akarlilar has moved to New York in a hands-on stab at goosing U.S. sales. “We have not done as well as we could have here,” said Akarlilar of the $300 million brand, 15 percent of which is in the U.S.

The company has long focused on the opening price point of the premium market, with jeans retailing for $100 to $120. For fall, Mavi is pushing its new higher-end range of $140 to $180 jeans, under the Mavi White Edge label for men and Mavi Gold for women.

Mavi owns its own denim factories in Istanbul and Egypt and aims to leverage its vertical structure to expand at key U.S. retailers, including Nordstrom, its largest account. “Of course product is important but the operational aspect is crucial, as well. There is so much competition from vertical chains that retailers need partners with great service and reliable supply chains,” said Akarlilar. “We have a core replenishment program where we can get back into top-selling items in four to eight weeks.”

Despite the unseasonably warm winter, outerwear maker Andrew Marc continues to shine on the strength of its growing lifestyle appeal, said Eric Beder, an analyst at Brean Murray, Carret & Co., in a research note from Project.

“The emerging lifestyle Andrew Marc brand demonstrates that fashion shifts and enduring brands still work, even in seasonally tough times,” noted Beder. “We believe it does demonstrate the potential for outerwear to rebound, driven by key fashion lines going forward.”

Beder also touted the rollout of men’s and women’s watches, adding to the collection of sunglasses and handbags from the brand, as evidence of the brand’s burgeoning lifestyle appeal. Even better, Beder added, “We note Andrew Marc remains one of the key brands at Nordstrom’s that is not materially discounted.”

Over at True Religion Brand Jeans, Beder saw a period of retrenchment for the denim and sportswear maker. “After somewhat sobering 2012 guidance, the company is continuing to build the international business model and to lever potential expansion opportunities,” said the analyst in his report. “While we believe results, especially in the first half, will do little to cheer investors, we view the company as building a much better and stronger business model that could drive upside as early as the second half.”

Beder noted that women’s product has been especially challenging at True Religion, with women’s sliding from 60 percent of the business to 41 percent currently. “Management has aggressively brought in better designer talent to create more feminine and tailored looks for the customer,” said Beder.

The Project Wooster showcase got admiring plaudits from retailers for its enticing showcase of innovative, high-end labels like Rocky Mountain Featherbed, Nepenthes, United Arrows, Post Overalls and Visvim. The one complaint? Most of the lines were not for sale to retailers, as Project Wooster is conceived primarily as an educational and inspirational installation.

“It’s a bit of a tease,” said Mario Bisio of Mario’s in Seattle and Portland, Ore. “There should be some way to get each brand’s electronic information easily there.”

Pan Philippou, ceo of Ben Sherman, said buying budgets of most his retail partners are up this season. The London-based brand, a unit of Oxford Industries Inc., spotlighted its Made in England program of tailored outerwear, such as a handsome crombie topcoat, and shirts made from Albini fabrics. The range is part of the brand’s push up the price and quality ladder in recent seasons, as seen in its premium Plectrum collection. Five-pocket chinos were fashioned from shirting fabrics for $125 while similar styles in wool were $150.

Massif, a new line of modern sportswear that uses highly technical fabrics, showcased its first full collection at the show. The pieces all offer moisture management, antimicrobial, stretch and 3-D properties and are based on the company’s heritage outfitting tactical military forces around the world.

Among the top pieces were stretch technical off-duty wool pants, with a retail of $165 to $175; a five-button officer coat blazer with articulated sleeves, mobility gusseting and an assortment of pockets for $595 to $1,195; a stretch wool woven shirt with military details for $165 to $190, and the lightweight nylon-blend Intercept jacket with banded collar for $325 to $525.

Scott Branscum, executive vice president and general merchandise manager, said the company is creating an in-store shop concept with Ken Walker for retailers who pick up the brand. The shops are focused around dressing room to encourage try-ons.

Creative Recreation, which is celebrating its 10th anniversary this year, showcased a variety of hybrid sneakers that combine dress and athletic shoe attributes, such as a leather saddle-shoe upper and a running shoe sole in a camo pattern. Other models offered tweed and plaid fabrications. “We’re getting back to being a lifestyle footwear brand,” said Josh Willis, director of merchandising.

The Cesario, the brand’s most popular model, is being given an update for the anniversary for a more sophisticated look. It will be unveiled to the public on April 2, the date of the anniversary event.

Making its Vegas debut at the show was Parshley Collection, a line from the U.K. that has been making hand-built bicycles since 1926 and has now branched out into cycling-friendly apparel. Sales rep Chloe Williams said the line was designed with attributes that work for riders such as extra fabric on the rear of the oxford shirts for comfort when leaning forward and an “action back” on the blazer for the same purpose.