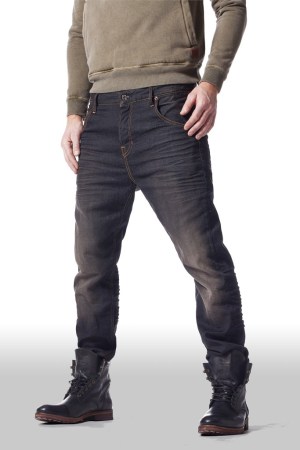 B&B, which ended its three-day run at the Tempelhof Airport Jan. 18, eliminated its Temple of Denim section, dividing the show more along the lines of lifestyle segments and raising the fashion bar for exhibitors.

“The streets are the best evidence that the so-called monocultures of denim or rtw don’t work anymore,” Karl-Heinz Müller, chief executive officer of Bread & Butter, declared. Moreover, Müller said Bread & Butter “would like to add a high-end women’s segment in the urban area” and is also considering a women’s “Upper Street” section. This may see the B&B layout revised again next season.

Bread & Butter’s moves to elevate the standards for exhibitor entry were well received.

“He [Müller] calls it the show ‘for selected brands’ and this is truly that,” remarked Tony Tonnaer, ceo of KOI Kings of Indigo, about his satisfaction with the new setup of the fair.

Last season KOI was in the Temple of Denim section and now was part of the L.O.C.K. segment, described in B&B literature as dedicated to “craftsmanship, expertise, precision work and the highest manufacturing standards,” paired with “love, passion and pride.” Organizers, who subtitled the area “116 Labels of Common Kin,” said the aim was to demonstrate that the brands in this section offered a concentrated trading platform with authentic international exhibitors, starting with denim as a base and including shoes, accessories, sportswear and outerwear.

“If I look at the stores where we sell and I look at the brands around me here, it all makes sense,” Tonnaer said. “For us it is quite a good environment.”

Jason Denham, ceo of Denham the Jeanmaker, explained that Müller and his team made it easy for retailers to see brands not for the “names” as much as for their quality and price category appropriate for their respective stores.

“Karl-Heinz is the curator,” Denham said. “He knows how to bring brands together and showcase them, and [this season] it was clear.”

While difficulties in southern Europe are expected to keep the euro zone in recession this year, with the International Monetary Fund projecting a 0.2 percent contraction for the region, strength in northern Europe and growth in new and emerging markets is seen pushing global growth up to 3.5 percent this year, according to the IMF. The challenges in Europe are expected to limit growth among advanced economies to 1.4 percent, but B&B provided signs of improvement, especially in the growing willingness of buyers to commit to orders at the show.

“There was a diverse representation of quality international buyers and retailers at Bread & Butter, and we garnered unprecedented interest from the Japanese market,” said Fred Mazza, ceo of New York-based brand Prps, about the fair.

“I found some great brands, such as Rokker Jeans and KOI Kings of Indigo,” noted Sam Ben-Avraham, buyer for Atrium in New York and Miami and himself a trade show veteran as the founder and former president of Project. He added that he came to B&B to find new lines that have value for the money.

This sentiment was echoed by Tim Groothuis, buyer for the seven Bendorff’s multibrand men’s wear shops in Holland. “We look for special things, exclusive items that have good quality next to a good price.”

Groothuis added that the market had changed enormously in recent years and the days of stocking a lot of product in anticipation of across-the-board consumer acceptance are gone. “Five years ago, customers would think once and buy,” he said. “Now they think about it three times before they buy and we do the same here — we think about quality, style and price.”

Groothuis said that “buying strategy this season includes our basics, Nudie Jeans, Drykorn, Marc Jacobs and new items that will fit our store concept. For fall we see a lot of big knitwear, wider knits and big cable knits. In denim, heritage is still good for us and we are adding more sportswear. We sell a lot of dress jackets paired with jeans and we see this working.”

One brand that stood out was Japan’s Momotaro. To make it easier to market its jeans, Momotaro maintains a uniform retail price of 200 euros, or about $270 at current exchange, for all its jeans for both men and women, regardless of fabric or style.

Despite the difficulties facing the nation’s economy, Italy continued to assert its status as a jeanswear and denim innovator. Three relatively new Italian brands were at B&B for the first time and distinguished themselves with bold statements: Bark, with colorful knit sweaters, reversible jackets and coats for men and women; Two Italian Boys with refined and elegant yet casual suits and separates for men, and Care Label, a denim brand for men and women offering raw and treated selvage jeans with camouflage printing on the inside of the fabric.

Another newcomer emphasizing its “value for price” proposition was Allevol, a U.K. brand offering handmade Japanese selvage with a touch of vintage from 125 pounds, or about $195, at retail.

Showing the durability of premium pricing when the fashion ante is raised, New York’s Prps showed its Prps Noir collection with new hand-distressed limited-edition jeans handmade in Japan. Put through a hard-core finishing process that leaves oil slicks, holes and exaggerated signs of wear and tear for 1,000 euros, or about $1,350, at retail, the collection was picked up by Bergdorf Goodman and Ron Herman.

New treatments in the form of flocked denim and ethnic prints were spotted at Mavi. Serdar Mazmanoglu, director of Mavi Europe, said business for the Turkish brand had a very good start this season at B&B. He noted the one-season collaboration with designer Hussein Chalayan had been quite successful and that Mavi is currently in talks with another designer of the same caliber, whose name he would not divulge.

Notable textile innovations were found at Amsterdam’s Gsus Sindustries, which brought out glow-in-the-dark jeans, “spotted” denim (referred to as jeans with “colored pickles”), as well as the textured “towel rough” but soft jeans. Gsus also got in on the camouflage action with blazers and pants for men and women.

Across every segment of the market there were motorcycle influences, as well as flight jackets and other military styling. Despite the enduring strength of the skinny silhouette, new shapes for women included evolutions of baggy boyfriend jeans with a more feminine, high-waist and cropped silhouette. For men, trends for fall included shorter, sock-revealing tapered stretch jeans, while wider, low-crotch baggy styles continue as part of the fall picture.

For their first ventures into women’s wear for fall, Nigel Cabourn, KOI and Japan Blue presented their key men’s looks in smaller-scale versions for women. KOI’s Tonnaer noted that his decision to branch out into women’s was fueled by retailer requests.

In terms of both presentation and product for the younger fashion set, Berlin dressed up this season, as clearly seen at Bright, the “street and skate” show now in its 16th season. The “Bright European Skateboard Awards” had a formal dress code this year. Guys were big on suits worn with sneakers and knit caps.

Besides moving to a more central location that brought more retailers to the market, a challenge for the Bright show this season was to separate streetwear from skateboard fashion in a more businesslike setting. Bright founder Thomas Martini said, “These days most brands are going in a more clean-looking direction. It seems like everybody is growing up.”