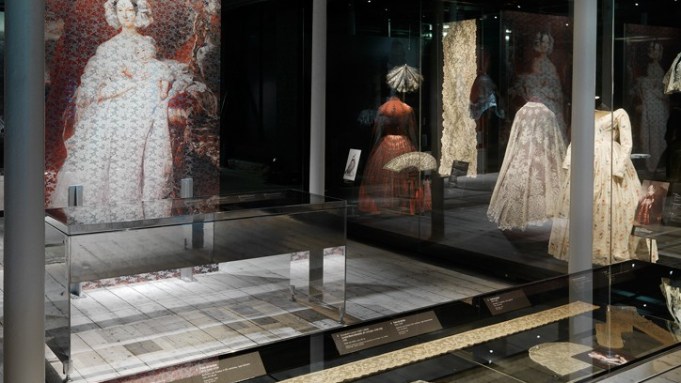 CALAIS, France — A 19th-century red-brick former lace factory reopened here last week as a museum dedicated to the fabric it once produced.

Ribbon-cutting on the International City of Lace and Fashion took place June 11. It’s a landmark event for Calais, a town known as the “capital of lace” located in northern France’s Nord-Pas-de-Calais region, which has been a center for mechanically produced Leavers lace for almost two centuries. While some 30,000 locals earned their livelihood from the lace trade here at the turn of the 20th century, today around 1,500 people make a living from the dwindling industry.

Six major lace manufacturing firms remain active today, including Desseilles Internationale, Noyon-Dentelle and Codentel, with 1,000 new styles of Leavers lace said to be produced yearly. Around three quarters of the region’s Leavers lace production is exported. Main clients are from the lingerie and ready-to-wear industries.

Martine Fosse, the museum’s head curator, noted that Calais’ expertise was even exported to America at the end of the 19th century, with Leavers looms and trained personnel dispatched from the region.

As a state-of-the-art homage to the ornamental fabric’s past, present and future, the 27,000-square-foot museum contrasts modern black walls, glass and metal display cabinets and colored neon strobe lights with worn white wooden floorboards and white pillars once used to mark the positioning of the Leavers lace machines. The building is fronted by a futuristic, L-shaped steel and glass extension with screen-printed panels inspired by the traditional jacquard cards used on Leavers lace machines. The design is the product of architects Alain Moatti and Henri Rivière, who conceived Jean Paul Gaultier’s Paris headquarters.

As part of an effort to have the space function as a “living museum,” the facility houses an on site library, and production, design and fashion workshops. Another section houses five vintage Leavers looms strung with a spaghetti junction of threads that, with the cacophonous jerk of myriad machine parts, transform into rolls of lace in front of visitors’ eyes.

“[As someone in the trade] you can’t imagine the importance of the sound of the machines turning and to hear that sound in a cultural site is really moving,” said Olivier Noyon, chairman of Trame, a business club for leaders of the lace industry that supported the museum project.

Noyon is also chief executive officer of the troubled lace firm bearing his name that is under administration until October.

The museum traces the evolution of lace beginning in the 16th century, from the handmade to machine-made and beyond. Early archival treasures on display include a 17th-century Italian gros point, or rose point, lace, with its raised finish. Highly expensive, in its day the fabric was all the rage in the court of Louis XIV.

Meanwhile, a row of copyright books filled with swatches from the 19th and early 20th centuries pay testament to the evolution of mechanical lace production from being a mere imitator of handmade lace points to a creative tool in its own right. Motifs often represented current events, as opposed to floral and vegetable designs popular in handmade lace. Machine-made motifs from the Twenties on show include an Art Deco-style design of a female bather, the Eiffel Tower and an Egyptian lace design featuring pharaohs and lions.

“The Art Deco era was a very prolific period for mechanical lace and Calais was a very important producer of fantasy lace for clothing, as it is today for lingerie,” said Shazia Boucher, assistant fashion curator at the museum.

The use of lace in both fashion and lingerie plays out in one of the museum’s later rooms, with the fashion department boasting some 3,220 archive designs. Pieces on display include a peasant dress made by Paul Poiret in 1910 out of a lace-embroidered Russian table cloth, a lacy Fifties cocktail dress by Jacques Fath and a lace cape by Madeleine Vionnet with an Art Deco rose motif, circa 1924.

Chantal Thomass, the museum’s ambassador, who signed copies of her new book, “History of Lingerie,” at the event, said the site would host a lingerie exhibition next year.

More unexpected uses of lace across various design fields today are explored in the museum’s contemporary design laboratory section. Items on show range from a cement lace chair to a lace fence made from galvanized iron.