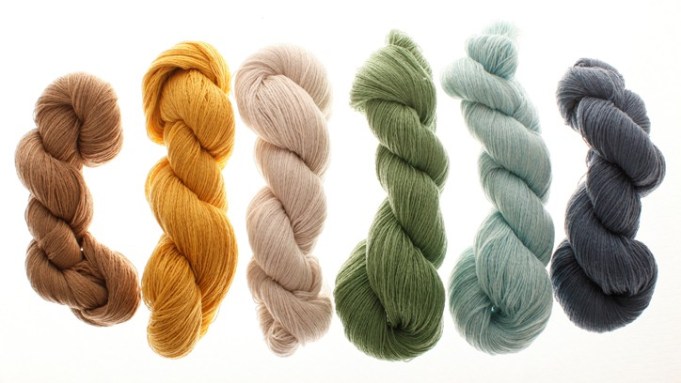 The forthcoming fair, which will take place Jan. 27 to 29 in Florence, will showcase vintage, used and natural-look finishes on fibers such as merino wool. A new class of superlight yarns aimed at convincing the industry that wool is a seasonless product will also be featured.

Zegna Baruffa will showcase vintage Seventies-inspired, sable-effect yarns in natural transparent tones, including silk fibers dirtied during the dyeing phase to create a retro-looking garment. The spinner’s new cashmere yarn, dubbed Chiavazza, has been developed to take advantage of the industry’s fascination with used yarns in warm colors such as chocolate, brown and bronze, while new super mélanges offer a fusion of color effects on Australian merino wool and cashmere mixes.

“Cold winters are convincing people to buy wool again,” said Stefano Borsini, president of Igea. “We believe in 2011 that mohair and rich fibers will be appreciated once more.”

The company will exhibit a pale spring palette of sand, camel and powder blue. The company ended 2009 with a 2 percent increase in sales compared with 2008, which Borsini credited to the strong performance of fancy yarns such as alpaca, mohair and viscose.

Borgosesia-based wool and cashmere spinner Lora Festa also intends to focus on wool rather than cashmere in the form of highly twisted woolen yarns in a variety of colors and counts.

“The myth that luxury is selling to my mind is not true,” said president Giacomo Festa Bianchet. “In 2009, I had more trouble selling high-end yarns such as cashmere than I did wool.”

The company ended the year 30 percent down compared with 2008.

“Wool is still very important and is the reason we are striving to create lightweight wool,” said Stefania Bernardi, area manager of Filatura e Tessitura di Tollegno. “Europe is improving compared to a few years ago; in particular, the U.K. and France are performing well.”

The Biella-based spinner will emphasize natural fibers such as wool, cashmere, silk, cotton and viscose in fine gauge counts with clean surfaces and effects. Vicky, a new viscose and merino wool blend, will make its debut in two counts alongside New Royal, a 100 percent superfine merino with improved handle. A neutral color card is intended to evoke calmness.

“The partnership will ensure we have an excellent supply of cashmere, at a time when cashmere prices are rising,” said Ian McGrattan, Todd & Duncan’s managing director.

McGrattan has returned to the company as managing director after being at the helm from 1998 to 2002. He succeeds James McArdle.

The company will offer an experimental palette for spring for its fine lightweight cashmere qualities such as Ghost, a 100 percent cashmere that creates superlight garments in almost half the normal weight. Warm, cocoonlike shades will offer intense but light tones alongside the firm’s extensive stock service described by McGrattan as being the backbone of Todd & Duncan.

Cariaggi, also a high-end cashmere spinner, will offer a selection of fresh neutral shades, including grays, greens, sands and epidermis tones. One of its latest developments, a yarn it has dubbed Guado, has five mélange-washed denim tones in 100 percent carded cashmere and extrafine merino worsted wool.

Conscious the poor economic environment looks set to linger, spinners are examining their infrastructure, as optimization becomes the new industry buzzword. Todd & Duncan is not the only company to face spring with a new structure. Zegna Baruffa acquired Filatura di Chiavazza SpA, a luxury woolen yarn producer, in June, followed in December by Botto Poala, a Biella-based spinning mill.

“With our acquisitions, we hope we can provide a strong offer to the marketplace,” said Alfredo Botto Poala, Baruffa’s chief executive officer. “I don’t expect to grow but rather to create a better service.”

Zegna Baruffa will showcase its consolidated product for fall 2011. Botto Poala said volume was down 18 percent on 2008.