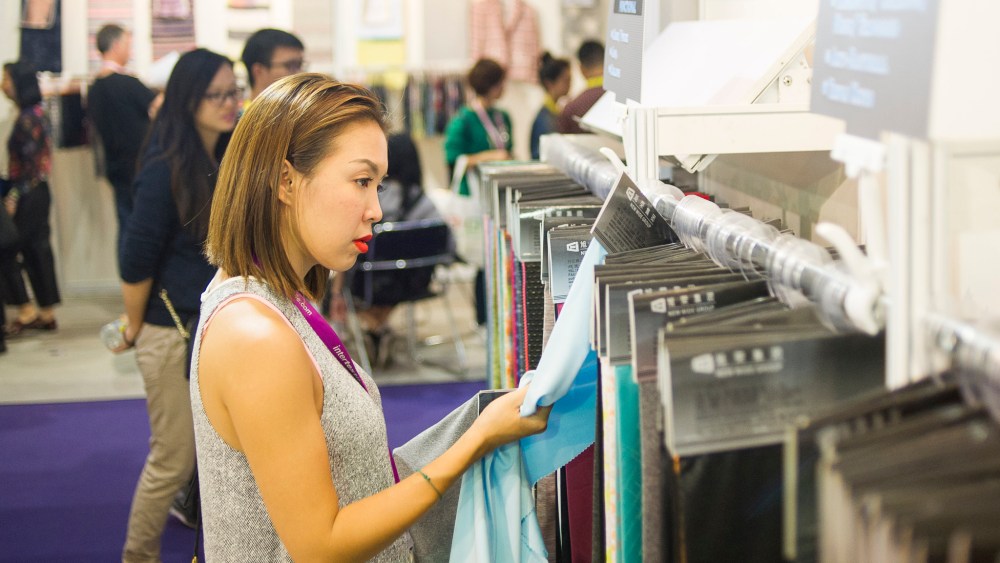 SHANGHAI — China’s economic situation, currency fluctuations and sheer size were all topics on the minds of exhibitors and visitors to the Intertextile Shanghai apparel fabrics fall edition, held here last week in conjunction with four other fairs.

Olaf Schmidt, vice president of textiles and textile technologies at Intertextile Shanghai organizer Messe Frankfurt, said the 20 percent increase in exhibitors, and particularly an increase in exhibitors from Europe, proved the continued importance of China to the worldwide market, even as the manufacturing giant’s economy cools.

“Intertextile is an international sourcing platform and the profile of sellers here from the overseas side, their positioning is from the medium- to high-end segment of fabrics,” Schmidt said. “This segment is not so impacted on the slowing economy. I think this is a big advantage.”

Intertextile Shanghai hosted 13 international pavilions, six of them from Europe, including a French and German pavilion, both making their first appearance at the fair.

For many of these European exhibitors, the ongoing weakness of the euro compared with the Chinese yuan gave their products proved a price appeal to the bulk of buyers in attendance, who hailed from Mainland China and were looking for a bargain on quality fabrics.

“When you think about currency situation, I think maybe we will see companies invest in the quality of the product,” Schmidt said. “At the moment, at our shows worldwide, in our textile portfolio, we don’t see any impact. The connection to the garment and fashion industry is still very strong and the price situation is not so critical.”

First-time exhibitor Agnès Colombet, a fashion division manager for French firm Satab, said, “This is the place to be. The Chinese are following the trends more and more, there is more and more high-quality fashion here. Most of our visitors have been Chinese, either for Chinese brands or manufacturing for foreign brands.”

Another contingent that saw plenty of business were the Japanese exhibitors, with the weakness of the yen compared to the yuan making Japanese products a good value bet for Chinese buyers.

“[We’ve seen a] few international visitors, but mainly buyers from Mainland China,” said Ma Jia Jie, a representative for men’s textiles at Takisada Co. Ltd. “The rate for the currency between China and Japan is good news for us, for all Made in Japan products and fabrics here, I think. The price is nice for the Chinese buyers and they are also interested in our high quality.”

For international buyers, the increase in size of pavilions devoted to sustainability, denim and high-performance products, echoing an increase in interest in these sectors in the industry more generally, proved popular, though the sheer number of exhibitors made the fair difficult to navigate for many.

Christian Marcon, a technology coordinator for Geox Respira, who traveled from Italy in search of functional fabrics, suggested a four-day fair — Intertextile Shanghai has experimented with both three- and four-day formats over the years — might be more useful to international visitors, such as himself.

“There are a lot of booths, a lot of people to meet, three days is very short,” Marcon said. “I have found several interesting materials, but it is really impossible to see everything.”

This is the second time the four fairs have run simultaneously and many visitors took advantage of the set up by visiting more than one of them.