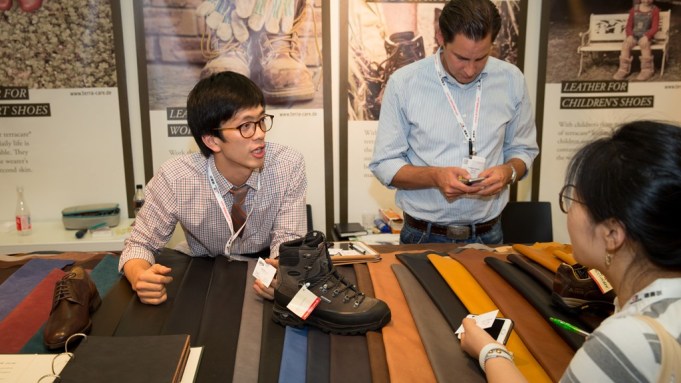 The All China Leather Exhibition (ACLE, now in its 17th year) ran alongside the China International Footwear Fair (CIFF) and Moda Shanghai in a three-day event. In total, 1,337 exhibitors from 38 countries were on show in a massive 989,920-square-foot exhibition space at the eastern end of the city.

The past year has seen stricter government regulations of the leather manufacturing industry come into force at a local, provincial and national level. These rules, aimed at lessening the environmental impact of the industry, have led to tannery closures in China’s north, as well as the refitting of many remaining factories.

Despite increasing governmental regulation and competition from newly ascendant manufacturing hubs elsewhere in Asia, directors of fair organizer APLF, Michael Duck and Perrine Ardouin, were quick to point out that the large domestic Chinese market, and the country’s export industry — which supplies billions of dollars worth of shoes, leather goods and leather to the wider world — remain unrivaled.

“Not just in this industry, but also in many others, the fact is that China now isn’t as much the factory of the world. It’s moving up the value chain, wages are moving up, prices of raw materials are moving up, so there is a restructuring at the manufacturing level — smaller tanneries are disappearing, but that is resulting in a better-organized industry,” Ardouin said.

“Eighty percent of the shoes exported to America still come from China, which is huge, yes ASEAN countries are increasing production, you’ve also got Mexico, Guatemala, but it’s unlikely these countries will ever have the capacity you can find in China, that’s what’s key,” Duck added.

According to figures from China’s Leather Industry Association, the first half of 2014 saw sales revenues for the nation’s leather, fur, leather goods and footwear sectors reach 587.4 billion yuan, or $95.7 billion at current exchange, a year-on-year increase of more than 10 percent.

ACLE organizers said, in order to maintain production levels, China needs to import $7 billion of supplies — a juicy market for international exhibitors to aim for.

“In years past, perhaps international exhibitors wouldn’t have disclosed their latest collections in China, but now they do, because they understand that this is the market. It can’t be ignored; this is the place where things are happening,” Ardouin said.

Danni Shi, from China Jiangsu International Ltd., was one of the 19,500 buyers from China’s main manufacturing provinces to visit the fair (according to organizer estimates).

She, like many other domestic buyers, was on the lookout for high-end hides, which have been in short supply in response to a boom in luxury leather goods for the fashion and automotive industries over the past five years.

“We are looking for high-quality materials from international companies. The best we have seen today are from the European exhibitors — some of them we have worked with before, but some of them are new to us,” she said.

Mike Dodd, sales director at Pittards World Class Leather, an exhibitor for the last 15 years at ACLE, said Chinese buyers, such as Shi, were a big part of why they were at the fair, though not the only reason. “Over time, it’s become more international, it was very Chinese focused when we first came, but now it’s the opening of the season for traders all over the world,” he explained.