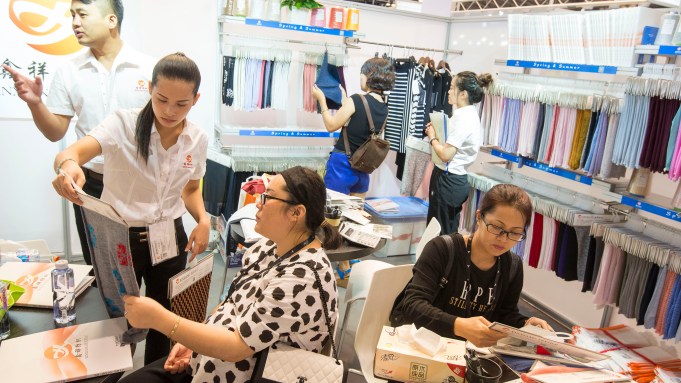 SHANGHAI–The top tier of China’s spinners, knit and yarn suppliers are weathering broader economic headwinds at home by focusing on quality and reliability, according to participants at the 28th edition of SpinExpo Shanghai.

“The people in the show all tell me the situation is not bad, it’s not booming but they are doing okay,” said fair organizer Karine Van Tassel, who also organizes SpinExpo in New York and, as of this year, a new SpinExpo fair in Paris.

“I think a lot of companies that are in this show are doing very well despite times being more difficult because they are already structured, they have really worked out their structure internationally. They need to have better products, more reliable, more quality oriented, they know that.”

The most recent edition of the show ran Aug. 30 to Sept. 1 at the Shanghai World Expo Exhibition and Convention Center. It featured 191 exhibitors, the vast majority from the Chinese mainland, but also some from Italy, Hong Kong, Germany, the United Kingdom, the United States, Taiwan, South Africa, Japan, Korea and New Zealand.

Kurt Xie, from exhibitor Zhongyin Cashmere, the world’s biggest cashmere yarn supplier, said his industry was facing a number of challenges, including worldwide economic factors, as well as environmental factors.

“The global economic situation isn’t as good as previous years so buyers are more focused on the price, as well as changing the composition of the yarns. People who used to buy 100 percent cashmere are now looking at wool cashmere blends; they are looking at many approaches to get the cost lower,” he said.

“For the cashmere industry it’s not just an economic issue, it’s about global warming. Because the weather is warmer it becomes less necessary to wear cashmere sweaters, so the sales in big retailers, like Gap, Zara, or Uniqlo as well, the sales are declining compared to recent years.”

This said, Xie was confident that the biggest players, with long-running relationships and good reputations, were best placed to succeed in this challenging climate.

It was the company’s second outing at SpinExpo Shanghai, after also participating in the inaugural SpinExpo Paris in July.

“I think the first year we were here there was a curiosity factor, people were coming up to the booth asking us a lot of questions about the possums and where the fibers come from, but the last 12 months, people have read the whole story, so now they want to know more about what the product is,” said Woolyarns’ marketing manager Jimad Khan.

As with other high-end exhibitors, Khan said the buyers they were meeting with, mainly from China, Japan and Hong Kong, seemed less sensitive to price than other considerations.

“At the top end of the market, which we are dealing in, while price is a factor, it’s not as influential in the decision making process. They are obviously going to try and get the best price they can, but we are offering something different than anyone else has, and that justifies its value,” he added.

The Italian presence was noticeable, with their yarn pavilion, featuring 11 exhibitors, proving a popular attraction for visitors over the course of the fair.

Lindsay Elbon, senior knitwear designer at Pendleton Woolen Mills, was one of the buyers particularly interested in Italian yarns.

“For our brand we look for Italian yarns, something with a story. I think now Italian yarn is getting a bit more comparable to Chinese yarn, pricewise, so that’s good for us,” she said.

In recent years, the relative strength of the Chinese yuan, compared with the euro, has also encouraged more Chinese companies, who are looking to move up the value chain, to more carefully consider Italian yarns as a viable option.

“There are more and more Chinese companies that are looking for higher-end product, and for this, they are looking outside of China,” Van Tassell said.

“They are interested in finding something new, with a better handling, a more fashionable feeling. It remains to be seen whether they are willing to pay the price for these kind of products they are saying they are seeking out.”

Karlie Symone Whitehead, a womenswear designer at Primark has been coming to SpinExpo for nine years, and has seen the fair evolve into a more trend-focused one over that time.

“We are looking for new innovations, new trends on yarns, so we can start putting together our packages for winter,” she said. “We are looking for China yarns; it’s too expensive for us to buy European yarns. We like the sporty look coming through. We will be placing orders on some key yarns, just small quantities at this stage, to start to build and put together packages.”

Athleisure has been a dominant trend and focus of the knitting and spinning industry in recent years, but according to Van Tassel, is on its way out, and as fashion continues to become more segmented, the industry is evolving to provide niche products and smaller quantities.

These days, according to Van Tassell, the one identifiable fashion trend is actually a desire for “non-fashion” – everyday, comfortable garments, without too much embellishment.

“People want sophisticated, but simple,” she explained. “It’s almost an absence of fashion that is becoming fashionable.”