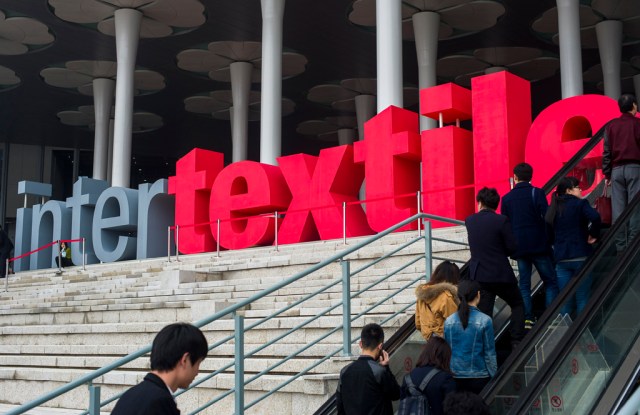 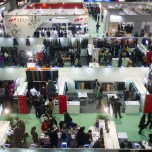 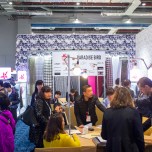 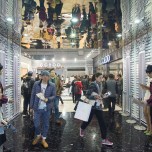 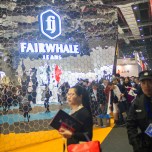 SHANGHAI — China’s apparel, textile, yarn and knitting industries put up a united front here last month as pressures from a broader economic slowdown, a rise in domestic wages and the strength of the yuan against the euro and yen all take their toll.

This story first appeared in the April 7, 2015 issue of WWD. Subscribe Today.

The spring edition of the Intertextile Shanghai Apparel Fabrics show joined with CHIC 2015, including a mini edition of The Micam Shanghai footwear exhibition, and coincided with two smaller fairs, Yarn Expo Spring and PH Value, previously known as the China International Knitting Trade Fair. All the fairs were held at the newly constructed National Exhibition & Convention Center.

CHIC hosted more than 1,000 brands from more than 21 countries, while Intertextile had more than 2,600 exhibitors from 24 countries for this spring edition, a sharp rise from the 1,500 that showed the same time last year.

Olaf Schmidt, vice president of textiles and textile technologies at Messe Frankfurt, organizer of Intertextile, said the multiple fairs running together across 2.4 million square feet at the convention center was advantageous to exhibitors and visitors.

“We are now able to cover the whole textile value chain,” Schmidt said. “It’s great for exhibitors and even better for buyers.”

Many of the buyers were taking advantage of the new arrangement by visiting more than one fair, though most were concentrating on either Intertextile or CHIC, and visiting the others more out of interest than to do any serious business. Intertextile exhibitors reported foot traffic equal to that of the autumn fair, traditionally the bigger of the biannual events.

Despite huge numbers of visitors, enough to overwhelm the neighboring metro station, causing long queues for tickets and trains, the current economic and political climate had many domestic exhibitors down.

“Things are getting harder and harder for our industry,” said Jean Yuan, from Shaoxing County Jiema Import and Export Co. “Not only has the economy slowed down, but we also no longer get the support from the government we used to because textiles and apparel manufacturing has a bad reputation for pollution. The government doesn’t want to be seen supporting polluters. I have friends who have moved their small factory to Indonesia and they are saving upward of 400,000 yuan, or $60,000. It’s not hard to understand why so much manufacturing is moving away from China.”

Reflecting broader industry trends, those who were at Intertextile to buy were particularly interested in high-tech and sustainable fabrics, with the All About Sustainability hall introduced last year proving a crowd favorite.

Sheby Kwok, sourcing manager for garment manufacturer Quick Feat International Ltd., was in the market for functional fabrics for both men’s and women’s wear. “For now we will be sourcing more Japanese fabrics, maybe also European, because their currencies are quite low now,” Kwok said. “We are looking to source functional fabrics and there is much more choice now than there has been in previous years.”

At CHIC, European, Japanese and Korean brands all proved popular, with crowds of buyers looking to take advantage of the relative strength of the yuan. The enthusiasm was tempered somewhat by China’s broader economic malaise, which put some customers off buying up big quantities.

“Their economy is still growing at seven percent, but to speak with a lot of Chinese buyers here, you would think the economic situation was much more dire,” said Gabriele Giannini from exhibitor Lanificio Comero. “Look at Italy, growing at zero percent. That’s a bad economy.”

Meanwhile, overseas visitors such as Gustavo Ricci from Brazilian e-commerce site Mandores were confident value could still be found among Chinese exhibitors.

“The prices are still good, even with the currency situation,” Ricci said. “Here, you can definitely find good quality at a good price.”