Following a year in which it is revamping its product, store concept and advertising strategies, the brand is unveiling the first iteration of its evolution. 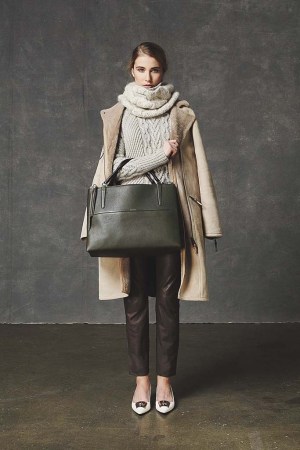 This story first appeared in the September 9, 2013 issue of WWD. Subscribe Today.

Following a year in which it is revamping its product, store concept and advertising strategies — all the while undergoing major changes in top management — Coach is unveiling the first iteration of its evolution.

In an exclusive interview with WWD, president and chief commercial officer Victor Luis, who will take over the reins from Lew Frankfort as chief executive officer in January, whisked through one of Coach’s many showrooms at its headquarters here to unveil a year’s worth of new product, as well as an updated store look, logo, packaging and campaign featuring Karlie Kloss and Liu Wen.

“We looked at every little tweak,” Luis said as he went through several core and capsule collections, beginning with holiday and ending with spring. New advertising, product and store looks will begin filtering in beginning Nov. 1, the incoming ceo said, explaining that the “elevated” or more expensive capsule collections are at the center of the “transformation.” Those collections will be rolled out to 27 cities around the world, including New York, San Francisco, London, Madrid, Hong Kong, Beijing, Shanghai and Tokyo.

Earlier this year, Coach mapped out plans to flow in capsule collections throughout the year that will incorporate the brand’s ready-to-wear, bags, shoes, jewelry, eyewear and other accessories, in order to become a lifestyle player in the minds of its consumers. Additionally, Coach decided to focus on the look and feel of its stores and marketing to reflect a 360-degree dual-gender brand.

Frankfort and executive creative director Reed Krakoff had put this strategy into motion in January. Now Frankfort, who will stay on as executive chairman, will cede his ceo title, and Krakoff has left the company to run his namesake label full time. Although Coach hired ex-Loewe creative director Stuart Vevers to succeed Krakoff, nothing Luis showcased last week reflected Vevers’ influence. According to Coach, Vevers, who just started last Monday, will produce his first collection next fall. Regardless, the brand said any changes made now were just beginning steps, which should be viewed more as a “testing phase.”

Luis, who likened Coach to a very large ship, added that time is of the essence, as competition in the contemporary space from brands such as Michael Kors and Tory Burch is hitting a fever pitch.

“The category is certainly more vibrant and certainly more interesting than ever, actually,” Luis said. “We have a lot of friends but they don’t always invite us to dinner.”

Luis’ primary concern as ceo is bringing Coach to its next level of growth by attracting a more aspirational consumer, willing to spend upward of $1,200 a bag, without abandoning its core midlevel customer, who typically shells out less than $300 a bag.

“A lot of brands have undertaken much smaller-scale transformations,” he said, of the more than $5 billion business. “Given the size of our business and the scale and complexity of our business, this is truly a multiyear journey. It’s a lot of fun. We’re really enjoying seeing it evolve. For us this is the next big leap.”

In plain terms, that evolution begins with product. In addition to bags that weave in new treatments, exotic skins and leathers such as boar, the brand has launched The Borough bag, a sleek silhouette that comes in two shapes, east-west or north-south. The classic, clean look of the bag is punctuated by the diminished new logo, which reads “Coach New York” in small metallic letters.

That logo will appear on much of Coach’s product, which includes calf-hair fold-over clutches, studded duffel sacs and striped and color-blocked bowler bags.

Pointy heels with shiny gold-toned hardware, plaid shirtdresses, textured, woven capes and knee-length A-line skirts have been thrown into the mix, as have a host of accessories, footwear, outerwear and rtw looks.

But back to that logo. Unlike the previous logo, which includes a horse and carriage and the words “Coach est. 1941” enclosed in a rectangle with “New York” underneath, the new one has dropped the date and the rectangle. The font has also changed and the lettering is filled in and appears larger.

“We let Coach free. I think the proportions are very sleek,” said executive vice president of marketing and strategy Stephanie Stahl, as she held the brand’s new shopping bag replete with logo. “When we saw this, it felt spot-on. It felt very much us, today, tomorrow and yesterday.”

Previously, customers would receive either a red shopping bag or a dark brown bag from its men’s store. Now the bags are a rich, tan textured shopper with the new logo in coppery, brass lettering.

Stahl explained that as the brand strives to be seen as more fashion-driven, it decided to lose the “1941” and stick with “New York.”

“As we become increasingly global, as well as refer to our heritage and fashion, we wanted to get more of a minimal feel,” she said. “New York is a more important callout than 1941.”

Packaging will roll out in tandem with the brand’s new advertising campaign, featuring Kloss and Wen for women, and Will Chalker for men. Dressed in head-to-toe Coach fall looks, the three models were shot by Craig McDean and styled by Karl Templer in New York during an untimely summer heat wave.

All of the models will be featured on Coach’s Web site and will kick off a video campaign called “Coach New York Stories” and talk about their links to the city. It goes live on Sept. 18 with the models’ stories. Wen will tell her story in Mandarin and English, Stahl said, adding that the video campaign will be ongoing and feature two new “tastemakers” every month beginning in November.

That will be backstopped by the print ads, which will appear in publications ranging from The New York Times, Wall Street Journal and New York Post to Vogue, Vanity Fair, Esquire and Bon Appétit.

“It’s an integrated campaign that we really feel starts to message the Coach girl, who she is, you know, very present emotionally, accessible, upbeat,” Stahl said, referencing the women’s campaign and the choice particularly of Kloss. “She’s a Coach girl at heart. She came in here very jazzed.”

The last bit of Coach’s transformation impacts its wholesale and retail stores. Retail doors will be completely redesigned, with the first two stores, Coach’s 79 Fifth Avenue flagship in New York and its South Coast Plaza store in California, having new light fixtures, tables, floors, rtw racks and shoe salons. The brand will sprinkle in leather accents as a nod to its heritage and will bring in video screens that will lean against the wall, giving each space a gallery feel.

“These first stores are going to be laboratories for us where we test some of these new ideas,” Luis said. “We are very much working on defining the Coach environment for this woman, as she evolves with the campaign.”

While South Coast Plaza and Fifth Avenue will be completed by Dec. 1, the company won’t be ready with its next slate of renovations until June. This will include eight domestic doors and two international doors, one in Chengdu, China, the other in Shinjuku, Japan.

On the wholesale side, by Nov. 1, Coach said it would have renovated more than 85 of its “key” locations in Bloomingdale’s, Macy’s, Lord & Taylor and Dillards. By the end of fiscal year 2014, it will have updated roughly 200 to 300 shops-in-shop nationwide.

But there’s still much work to be done, as Coach has a distribution of more than 950 directly operated locations worldwide and 1,200 wholesale doors.

“We are at the beginning stages of this transformation. There will be a point, of course, where all of these three touch points come into a harmony in transformation,” Luis said. “We are not going to transform over a thousand stores overnight. It’s a multiyear journey to get there. We are managing that and understanding that being a global brand with complex distribution, it’s not like [turning on] a light switch.”