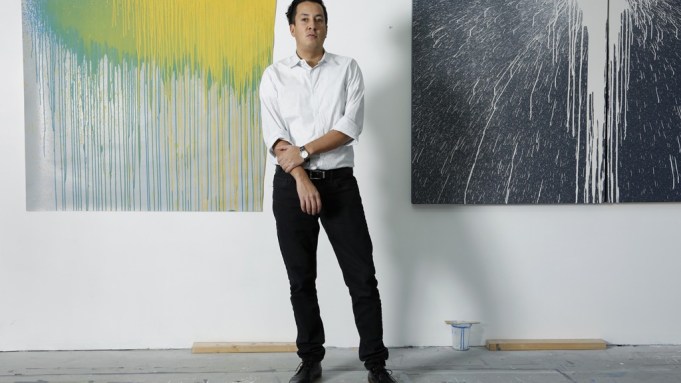 Guys looking for a little street cred with their Coach accessories may find it in a new capsule collection of leather goods adorned with designs by artist Craig Costello, aka Krink.

Known for his drip and splatter motifs, graffiti artist Costello has partnered with Coach on a line of bags, iPad sleeves, a zippered portfolio, wallets and luggage tags that retail from $98 to $798. The collection will be available on coach.com later this month and in select Coach stores on March 1.

Costello, who was born in New York and raised in Forest Hills, Queens, has developed a product-friendly aesthetic since making a name for himself as a street artist with the tag “KR.” He’s collaborated with dozens of brands, including Modernica, Nike, G-Shock, Carhartt, Levi’s Japan, KidRobot and InCase, to name a few.

Last year, the East Village-themed Rattlecan restaurant in The Venetian hotel in Las Vegas tapped Costello to help decorate its walls, along with street art peers such as Curtis Kulig, Aiko and Kenneth Cappello, testament to the mainstreaming of graffiti art.

Costello markets his own line of premium art supplies — not necessarily for use as graffiti tools, he insists — under the Krink name, which is a portmanteau of “KR” and “ink.” The high-end markers and inks are sold at art suppliers like Pearl Paint and Blick, as well as trendy shops such as Colette in Paris and The Standard hotel commissaries.

“I think the projects we’ve worked on show a constant evolution of the brand. I don’t want to be held to a singular vision or a singular definition. I like to be broad-based,” said Costello of his disparate projects, which all stem from his distinct graffiti aesthetic.

After living in San Francisco — where he tagged bus shelters with a young Barry McGee, who has also since risen to prominence — Costello moved to New York in 1998 and began to develop his signature drip style around 2004. “I had this home-made ink and I’d go to a mailbox and the paint would drip. Then I decided to take my name away from the work. I’d just do the drips on a mailbox or doorway. The mailboxes got very sculptural and the doorways got more painterly. Without the name, it wasn’t immediately identifiable as graffiti,” he explained.

That may have been artistically true, but police officers may not have seen it that way and Costello was arrested a number of times in his graffiti-splaying days. He declines to give an exact figure and he hasn’t tagged on the street since 2006. “It’s less than 10 and more than one,” he said of his arrests. “It’s part of the territory. I don’t have a record and I’m not a criminal.”

Coach worked for the past year with Costello developing his capsule collection. The drips on each design were reproduced through a complex 30-step silk-screen process to capture specific nuances of depth and texture.