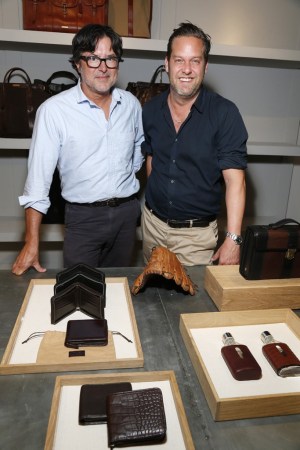 Coach has tapped Alabama-based designer Billy Reid for its latest collaboration, a capsule collection of men’s and women’s bags and accessories that will hit retail in September. The partnership marries Reid’s modern take on cultured Southern style with heritage elements from the Coach archives.

“The idea started with a phone call from them and I came to look through the archives and it really grew from there,” said Reid. The men’s offerings encompass five different bag styles in a number of color and material options and five accessory styles in various options. The women’s line includes five bag and clutch styles.

Brass hardware details, fabrics and silhouettes are inspired by vintage Coach designs, such as a tote fashioned from an archival twill and trimmed in vegetable-tanned leather. Another tote is made from Louisiana crocodile, from a supplier Reid uses for his own bags.

A silk jacquard fabric created by Reid for a dinner jacket in his own collection was used as a liner for some of the bags. A zippered wallet is based on a favorite design from Reid’s own wardrobe.

The line also includes father-and-son baseball gloves for $400 and $200, respectively, in a nod to Coach’s long tradition in the sport — and Reid’s own love for the game. The designer is an assistant coach on his nine-year-old son’s Little League team, the Florence All-Stars, who are playing in a state tournament this weekend.

“With his Southern roots and unique outlook, Billy brings a breath of fresh air to fashion,” said Jeffrey Uhl, senior vice president of men’s design at Coach Inc., remembering fondly the barbecue he sampled in Reid’s home base of Florence, Ala. “Both of us have a shared aesthetic of American design, with an idea of luxury but not overly adorned or pretentious.”

Coach, which on Monday named Stuart Vevers as executive creative director, has allied with a string of collaborators in recent years, including Saint James, James Nares, Hugo Guinness, Krink and Pierre Le-Tan. Reid’s previous collaborations have been a two-year line with Levi’s that began in 2010 after he won GQ’s best new designer competition and an ongoing shoe design with K-Swiss.