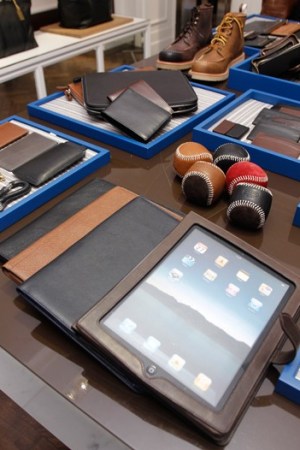 The plan, which will begin this year, includes additional freestanding stores, in-store shops within existing stores, a dual-gender retail concept and enhanced product offerings both in North America and overseas. All told, these moves are expected to double the men’s business in 2011, with further growth expected beyond that, according to Michael Tucci, president of the company’s North American retail division.

“We’re almost one year into our first freestanding men’s store on Bleecker Street,” Tucci said. “And the customer response to the more intensified assortment in that store and our shops in North America and Asia have led us to believe that the men’s opportunity is substantial.”

Right now, men’s accounts for less than 5 percent of the company’s $3.6 billion in annual sales. “But we’re expecting to double our men’s business this year,” Tucci said. He said the growth will be “organic” and will not be tied to expansion in women’s. “But it represents a very substantial volume opportunity in the near and long term.”

Although he declined to provide a volume figure, Tucci said the productivity of the Bleecker Street men’s store on a “per-square-foot basis is among the best of any store in the chain.” As a result, the company has signed deals to open two additional men’s-only stores in the late spring, at Copley Plaza in Boston and Garden State Plaza in Paramus, N.J. Although Bleecker Street is a street location, Tucci said he believes the company has created an environment that is complementary and will translate well to a mall environment.

Beyond that, the company expects to open another three to 10 men’s-only units the following fiscal year. Coach’s year ends in June. “There will be a more aggressive rollout in calendar year 2012,” he said. Although leases are still in negotiation, Tucci said the company is close to inking deals for Washington, San Francisco and Los Angeles for freestanding stores.

The stores will range from below 1,000 square feet to 1,500 square feet, and the productivity is expected to be “extremely high, given our sales thresholds,” Tucci said in a conference call Tuesday announcing the company’s 25.9 percent jump in second-quarter earnings.

The men’s push is “multilayered,” Tucci added, and will include a dual-gender model that will offer men’s in a separate environment adjacent to a women’s store. Tucci did not provide a goal number for the dual-gender stores, saying: “We’ll open a couple in fiscal year 2012 and see how they play out. If they work, it will provide another growth opportunity.”

Shop-in-shops in large flagships in North America and internationally are also part of the plan, as is “maximizing opportunities in existing stores” where the men’s product is generally relegated to wallets and belts. “This month, we dedicated more space and introduced a broader men’s product assortment to seven additional stores, bringing our total men’s concept-store count to 37 in North America, including eight flagships such as 595 Madison Avenue in New York,” Tucci said.

Online offerings will also be beefed up.

Victor Luis, president of international retail for Coach, said the company has opened three men’s-only shop-in-shops in Japan over the past 11 months and they are all performing well above plan. Although additional sites have not yet been secured, the plan is to continue to expand this concept going forward, he said. In China, Luis said, Coach is focusing on expanding men’s through the opening of dual-gender shops. “We have a tremendous opportunity in front of us,” he said.

In terms of product, the men’s assortment is being substantially expanded to accommodate the newfound business.

President and executive creative director Reed Krakoff pointed out that Coach started out in 1941 as a men’s leather goods business and didn’t add women’s until the Sixties. “There’s a lot of excitement and opportunity to grow the men’s business,” he said. “It’s a real complement to women’s.” He said the brand has worked hard to “get the collection right and add categories that we didn’t have in the past.”

The company’s historical strengths in wallets, belts and briefcases has now been expanded into a full collection, ranging from messengers, commuter bags and totes to dopp cases, baseball paperweights, key chains, fobs and luggage tags. Apparel, including outerwear in leather and other materials, sweaters, scarves, sunglasses and shoes are also part of the mix today. “We want to tell a whole story when you walk into the store,” he said.

The assortment is “much more youthful and urban,” Krakoff said, classic and modern at the same time. “We don’t want to be in the fashion business. Our customer wants timeless investment pieces.”

In addition to the core collection, the men’s line will include several limited edition pieces such as iPad cases, molded leather cases for laptops, reversible totes and customized leather bike accessories.

Separately, the company in the first quarter also opened its first five stand-alone men’s factory outlet stores, which are performing above plan as well. “It confirms our belief that there is a particularly large opportunity for men’s in our factory channel,” Tucci said during Tuesday’s conference call. “During the remainder of fiscal year ’11, we’re planning to open at least five more men’s factory locations.” These stores will average 2,500 square feet.