The U.S. cotton industry's future will be determined in places such as India and China, where usage has waned in favor of synthetic fibers. 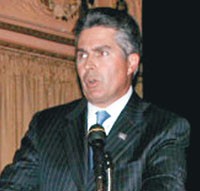 MEMPHIS — The future of the U.S. cotton industry will be determined in countries such as India and China, where the use of cotton in apparel and home furnishings has dwindled in favor of cheaper and easier-to-produce synthetic fibers, said experts at Cotton Inc.’s 18th annual Engineered Fiber Selection System Conference.

Industry and Cotton Incorporated executives focused their message on the importance of building demand for cotton abroad.

Cotton Inc. is employing a two-pronged strategy in these markets in a bid to take back market share: aggressively marketing the advantages of cotton over synthetics to consumers in developing countries, and encouraging foreign mills and textile companies to use Cotton Inc.’s EFS system.

“We must remain diligent to provide the latest technological improvements,” William S. Weaver, chairman of Cotton Inc., said in his opening remarks at the gathering here June 6 to 8 attended by more than 400 people.

The EFS system is software that utilizes U.S. Department of Agriculture High Volume Instrument data, which analyzes cotton fiber attributes such as color, quality, strength and thickness, and allows yarn spinners to produce a higher-quality and more uniform product.

“Cotton has not kept pace in terms of global textile demand,” said J. Berrye Worsham 3rd, president and chief executive officer of Cotton Inc., who characterized the situation as a “chronic global under-demand for cotton.”

Worsham said the situation has forced Cotton Inc. to shift focus from the domestic market, although he added, “We’re not abandoning the U.S. market. We have a 60 percent market share in the U.S.”

Expanding on an already commanding market share will be difficult and, as Worsham noted, “it means we have a lot to lose.”

This was especially apparent in 2004, when the U.S. cotton industry experienced an unexpected record crop of 23 million bales, compared with 16.7 million in 2000. A global surplus of 10 million bales ensued. At 480 pounds of cotton per bale, that’s a 5 billion pound surplus.

Kalyani Deshpande, a market analyst with Cotton Inc., gave an overview of first-quarter apparel sales results for 2005 and pointed out that the data indicates consumers are returning to dressier apparel. That is good news for the cotton industry because dressier slacks and woven shirts are generally made from 100 percent cotton. Deshpande said about 49 percent of clothing is made entirely of cotton.

However, cotton blends continue to gain ground. Twenty-six percent of clothing is produced with a cotton blend, up from 20.4 percent in 2001.

“Spandex is the primary fiber being blended with cotton,” Deshpande said.

The premium denim market was another area Deshpande said could have an impact on the cotton industry.

“We have to partially agree that there is a denim bubble,” Deshpande said of the premium denim market, which holds only a 3 percent share of the overall denim segment.

Still, consumer attitudes toward denim have changed, which may prevent a collapse of the premium denim craze, Deshpande said, adding, “Consumers are choosing fashion over function when it comes to denim jeans.”

Cotton Inc.’s commitment to expanding the EFS system globally was reflected in the demographics of those attending the conference, thrusting more than a few foreigners into a sea of southern growers and mill owners. A delegation from the West African nations of Benin, Burkina Faso, Chad and Mali — West Africa’s largest cotton producers — came at the invitation of the Department of Agriculture and as part of Cotton Inc.’s cotton fellowship program.

“Cotton production in Africa has to face a lot of hurdles,” Rodolphe Joel Kuy of Burkina Faso said through an interpreter. “We are not competitive at an international level. After the conference, we will come up with recommendations for our countries.”

Seidina Oumar-Diaby, another West African delegate, said, “We came here first as observers and we’re trying to understand the classification system in the U.S.”

Promoting EFS globally has direct advantages for domestic cotton growers because it requires foreign companies that decide to implement the system to use a large percentage of U.S. cotton in its operations.

China’s position as the dominant force in the textile industry made it an unavoidable topic of discussion.

However, Robert Antoshak, president of cotton consultancy Globecot Inc., said several factors would weaken China’s hold over the market during the next decade.

“We see that the worldwide textile industry is moving into a slow-growth period,” Antoshak said.

He also said the Chinese would outgrow textiles, seeking to move into more profitable and advanced manufacturing industries such as aviation and electronics. This will provide opportunities for countries such as Cambodia, Laos and Vietnam to fill the textile manufacturing gap.

The growing buying power of the Chinese population could have the greatest impact, said Antoshak, who described China’s transition into a culture of mass consumption as the “biggest wild card” facing the textile industry.

“By 2015, China will be a major importer of finished apparel,” he said.