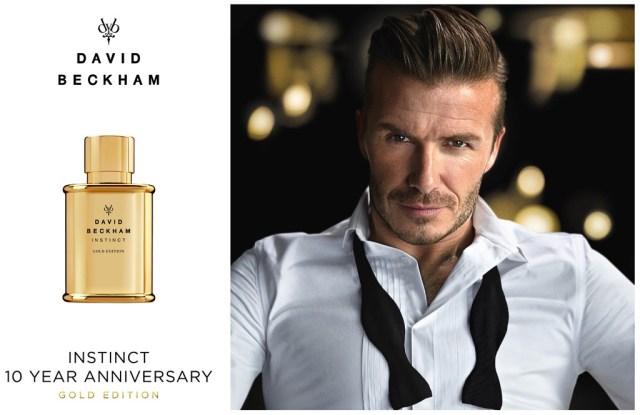 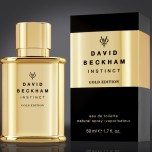 Since David Beckham first signed a fragrance deal with Coty in 2005 to launch his first fragrance, Instinct, the partnership has proved to be a winning one.

At the time, Beckham was a major soccer star with fan bases in Europe and Asia. But since heading to the U.S. to play soccer for the LA Galaxy in 2007, Beckham has cemented his status as a bona-fide global brand. And his fragrances have followed suit, with Yael Tuil, vice president of marketing at Coty, noting that Beckham has the best-performing fragrances of all the celebrities in Coty’s stable, who include Beyoncé, Katy Perry and Jennifer Lopez. And while Tuil said there was a “strong awareness” of Beckham when Coty had first signed him, she pointed out that “the key is to maintain that level of awareness. He’s really become an icon,” she said.

Now, to celebrate what Tuil called “the strength of the partnership,” between Coty and Beckham, Coty is releasing Instinct Gold Edition, a limited-edition fragrance in a striking, solid-gold-colored bottle, that hits counters in March.

Beckham noted during a telephone interview that he wanted the bottle to still be as “iconic, modern and refined” as the original, flasklike Instinct bottle, but with a “twist,” in that it’s in a solid, shiny gold. The former soccer player — he retired from professional soccer in 2013 — said that he had a hand in the development of both the bottle and the juice itself, a classic fougère that blends notes of lemon, bergamot oil, cardamom, rosemary oil, vetiver and patchouli.

“When I first sat down with Coty, I said, ‘You know, we can make this great, but I’ve got to be involved,’” Beckham said. “I’m not going to just give my name out to be stuck on a bottle of fragrance and say that I love it, because that’s not how I work.…People know that I’m involved with everything that I go into, and I think that’s what makes this relationship with Coty special,” he said. He noted that it was “pretty incredible” that his brand has become one of the best-selling celebrity fragrances, with 10 million bottles of his fragrance sold since 2005, which Beckham said equates to a bottle being sold “every two minutes.”

Perfumer Aliénor Massenet of International Flavors & Fragrances, who created the new edition, described the fragrance as “more intense,” than the original version of Instinct, with a “depth in the heart.” The fragrance’s top notes are lemon oil, bergamot oil and basil grand vert; the heart cardamom LMR, Juniper berry oil LMR and rosemary oil LMR, with base notes of cedarwood oil, patchouli and vetiver. Beckham said he’d envisioned the fragrance as appealing to a broad demographic, and being worn “not just in the evenings, but through the day as well.”

The fragrance comes in black and gold packaging and is printed with Beckham’s dVb crest. The limited edition — which Tuil said is designed as a “collectors’” item — will be sold solely as a 50-ml. eau de toilette, and launches at department stores and pharmacies in Europe, Australia, the Far East and South Africa in March and will remain on counters through June. Craig McDean shot the print ad campaign for the fragrance, which pictures Beckham in a tuxedo shirt and bow tie undone at the neck, gazing into the camera. Tuil said the aim was for the campaign to convey “a feeling of celebration.” “The idea is that if [Beckham] was to give advice, it would be to follow your instinct,” Tuil said. There will also be a digital element to the campaign running on Beckham’s Facebook page.

The fragrance will be priced at 33 euros, or $38. While Coty declined to provide sales estimates for the fragrance, industry sources predict that the limited edition could generate $4 million in retail sales while it’s on counter.

And to follow the limited edition of Instinct, Tuil noted that Coty is working with Beckham on a new “blockbuster” fragrance, that’s set to launch in August or September. While Instinct Gold Edition won’t be released in the U.S., the upcoming major launch will be sold there.