With the Pakistan rupee loosely pegged to the dollar and the strengthening of the Chinese, Indian and Bangladeshi currencies, Pakistani manufacturers have... 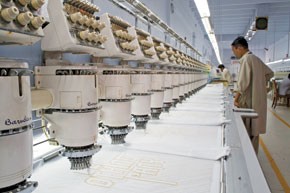 LAHORE, Pakistan — With the Pakistan rupee loosely pegged to the dollar and the strengthening of the Chinese, Indian and Bangladeshi currencies, Pakistani manufacturers have gotten an automatic price advantage against their regional competitors in certain categories.

After the successful and relatively peaceful holding of general elections in the country on Feb. 18, political unrest has also subsided.

Imran Iqbal, general manager of marketing of Active Apparel International, Pakistan’s oldest knitwear company in operation since 1954, with mills in Lahore and Multan here, and in Jordan and Egypt, said the country’s sourcing base is growing for U.S. importers.

“While the Pak rupee has devalued against the U.S. dollar by approximately 2 percent in the last couple of weeks, the Chinese yuan has appreciated 8 percent against the U.S. dollar, recently,” Iqbal said. “In addition, Chinese labor regulations are also becoming stringent, resulting in a higher production cost. Though the U.S. still has a quota on Chinese products, the European Union has opened quota-free doors to Chinese apparel goods and the euro continues to gain in strength. Chinese manufacturers are therefore obviously more interested in attracting European buyers at the moment.”

Similarly, the Indian rupee has also appreciated in the last year.

“We don’t perceive India as our competitor in coarser apparel knits products,” Iqbal said. “Indian mills’ strength lies in finer counts…whereas Pakistan indigenous cotton production base of long staple gives us an advantage for coarser yarns, which accounts for the volume business of U.S. importers.

“In Bangladesh, infrastructure issues, like floods and labor unrest, and longer lead times of manufacturing due to a lack of indigenous raw materials, makes it less competitive compared to Pakistan in embellished and fashion knits products. Kenya and Sri Lanka are also experiencing political unrest. As we cater to big-volume, year-round programs at a competitive cost, U.S. importers become our natural allies.”

“For cotton and CVC products, we prefer U.S. importers to use our Pakistani units for the expertise and faster lead times due to indigenous cotton,” Iqbal said. “Jordan is much more useful for synthetic products due to its zero duty advantage over Pakistan’s 29 to 34 percent on the same products. These offshore mills also provide us with a backup plan for timely delivery in case of any instability here. Knowing the ground reality full well, we factor in any disruptions that may occur and are careful not to overbook production.”

Amer Hameed Khan, director of operations at Masood Textile, based in Faisalabad, which produces five million garment units a month, said with the Indian currency expected to gain strength this year, as well, apparel manufacturers here are expecting extra business to veer toward Pakistan, Bangladesh and Vietnam.

Khan said the buzzwords for his industry are efficiency and productivity for mills wanting to survive in the post-quota economy with falling prices and rising costs.

“The minimum wage of a textile worker here has nearly doubled in the last three years, unlike in India and Bangladesh, where it has not risen as much,” he said. “The costs of fuel and utilities have also gone up, as has the price of raw cotton this year, while the dyes and chemicals used in this industry have to be imported, unlike in China and India. The declining prices and increasing costs mean we have to become more lean and mean.

“Therefore, productivity has to be optimized and inefficiency squeezed out by maximizing automation. On the stitching side, we have installed the Eton machines, increasing the needle time of the sewing machines. Similarly, formerly trimming was done by hand, but now we have auto-trimming presses accomplishing the job more efficiently.”

Khan said a newer mechanized system for fabric manufacturing with automated controls on dyeing of fabric machines has also been installed.

“Since the supply chain is long, logistics are also more mechanized,” he said. “We are improving procurement costs and inventory management efficiency, and there is in-house human resource training. We have hired international consultants with vast experience from countries such as Australia and Sri Lanka to impart further expertise to the local labor force. Pinching pennies by cutting out all waste, we are striving to become more competitive globally and survive in today’s market.”

Speaking of political disruptions, he said Faisalabad is largely a textile manufacturing city and is not prone to violence or strikes.

Pang, a Seattle native, said although 2007 was a politically turbulent year for the country, he never once felt his personal safety threatened. In his opinion, Pakistan’s instability and insecurity problems are overblown by Western media and that customers who cancelled their trips here are being oversensitive. Traffic congestion due to any unrest in the country is the most important factor affecting his work, he said.

“In the long term, Pakistan remains a good country from which to buy,” he said. “It has a relatively large fabric base, a large reasonably waged workforce and judging from the import figures, is still investing in textile machinery. We are planning to stay here as long as we get the kind of product we are looking for at the desired price point.”