The Miami footwear brand’s fresh take on the slipper includes producing limited-edition styles, most in batches of less than 50 units. 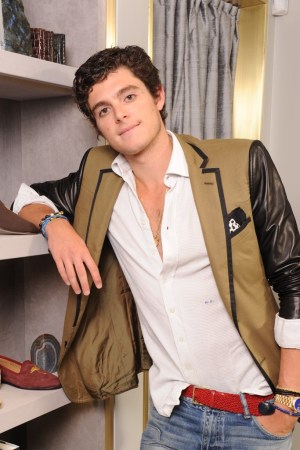 With once fuddy-duddy Prince Albert slippers being adopted by youthful trendsetters, Miami-based Del Toro is on a growth swing. Cofounded by Matthew Chevallard, who oversees the company, the footwear brand’s fresh take on the slipper has been picked up by Saks Fifth Avenue for this holiday season — which will bring Del Toro’s distribution up to about 35 doors in the fall, from 25 this past spring.

Last month, the company opened a new headquarters and showroom space in the Wynwood design district in Miami and is currently in negotiations to open its first freestanding store in Miami Beach.

“My intent is to bridge the gap between the sneaker world, the elegant Italian world and the prep world,” said Chevallard, 26, who was born in Torino, Italy — hence the brand’s name — and moved to Palm Beach when he was seven. The preppie influence comes naturally to the graduate of Lawrenceville School in New Jersey, as does an affinity for sneakers, 200 pairs of which once filled his closets as a teen.

Del Toro produces a prolific stream of limited-edition styles, which are mostly sold on its e-commerce site, to keep fans hooked on the inventive offerings. Most designs are produced in batches of less than 50 units, with production in a high-end factory in Marche, Italy. Apart from the popular black velvet slippers with skull-and-crossbones embroidery, other styles are fashioned from unexpected materials like raffia and in eye-catching patterns such as camouflage, tartan and tapestry.

Price range mostly from $295 to $325 for slippers and the brand has branched out to encompass driving loafers, wing tips and sneakers — all incorporating Del Toro’s unorthodox use of color, patterns and materials, like a pair of navy suede wing tips with kelly green soles or loafers in yellow linen with red laces.

“Del Toro has developed a great following — I almost want to say of cult proportions,” said Laure Heriard Dubreuil, owner of The Webster in Miami, which was one of Del Toro’s first wholesale accounts, picking up the line in 2010. “Del Toro is very classic yet fashion-forward and this unique balance is a testament to Miami. Miami is a melting pot of nations and styles and Del Toro represents this to the fullest.”

Other retail partners for the brand include Scoop, Five Story, American Rag, Kith, Tsum in Moscow and Wism in Tokyo. However, Del Toro’s own Web site generates about 75 percent of sales. Men’s accounts for 70 percent of total sales and women’s for 30 percent.

The brand’s highest-profile aficionado is probably Miami Heat star Dwyane Wade, who can often be spotted wearing a pair, such as the wing tips he wore on “The View” on June 27. Wade has collaborated with Del Toro on custom designs, as have Pharrell Williams and Theophilus London.

“I’ve always liked how a slipper can come off effortless and extremely stylish at the same time,” said London. “In my travels back and forth to Miami, I finally met Matthew. He immediately got my vision and we knew we could make something really sexy together.”

The path to celebrity collaborations and distribution in influential retailers wasn’t easy for Chevallard. “A lot of doors were slammed in my face,” he remembers of the early days of trying to sell slippers from an unknown brand to retailers. The more established Stubbs & Wootton pretty much owned the slipper market at the time.

Chevallard initially started the company with two Palm Beach friends, James Bohannon and Nathaniel Wish, with the idea of customizing velvet slippers to herald their respective graduations from boarding school. When that proposition turned out to be too expensive and time consuming, the trio saw a business opportunity. The friends ordered 800 black velvet slippers from Spain, but soon discovered it was impossible to custom embroider premade shoes — the first of many obstacles that left the business sputtering for a few years. Bohannon and Wish eventually exited the business, leaving Chevallard at the helm.

After graduating from the University of Miami in 2010, Chevallard focused full-time on building the brand and establishing a toehold in the fashion space, winning his first breakthrough orders from The Webster and Scoop that year. He built brand recognition by working closely with a host of style bloggers like Unabashedly Prep and Street Etiquette, which Chevallard credits with much of Del Toro’s early exposure to fashion influencers.

So far, the company is self-financed and Chevallard prefers solidifying the brand before seeking outside investors. “The company runs on cash flow. Everything I do is leveraged to the next thing,” explained Chevallard, who is now making belts and is aiming to expand into bags, backpacks and jewelry, such as bracelets.

“He has a vision and I think he is confidently seeking it out in establishing Del Toro as a luxury lifestyle,” said The Webster’s Dubreuil.