Tailored clothing sales fell 7.9 percent, according to The NPD Group. 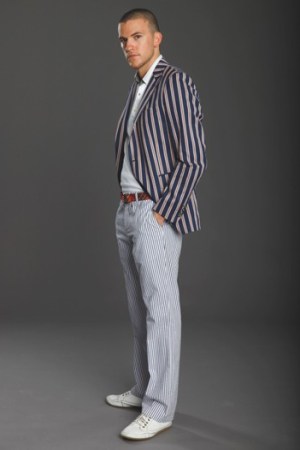 Feel like the economic rebound is taking forever? Just ask the suit vendors.

As classification businesses and men’s wear in general decrease the declines and even post modest year-over-year gains, tailored clothing continues to head in the wrong direction, causing business owners to wonder how to stanch losses and renew customer and retailer interest in the beleaguered suit.

“Men’s clothing is the first thing to get hit on the way down,” said Jim Ammeen, president of Neema Clothing Ltd., which owns Kroon and Haspel. “It’s the old story of Daddy starving first. Usually he’s hungrier first too, but there are a lot of factors keeping growth on hold.”

The numbers tell the story. Tailored clothing sales fell 7.9 percent to $3.68 billion in the 12 months ended in March, according to The NPD Group. Between April 2008 and March 2009, tailored clothing fell only 3.6 percent.

Compare that with denim, which posted a tiny gain (0.1 percent) in the latest 12-month period. Men’s apparel overall may have continued to slump in the period ended in March, but the decline was more moderate. For this period, it fell 3.3 percent, and the 12 months before, 4.8 percent.

Even during the all-important fourth quarter of last year into the first quarter of this year, suit and jacket sales tumbled 4.3 percent compared with a year earlier.

Executives cite a host of factors. Tailored clothing has lost a disproportionate amount of open-to-buy dollars as vendors lean on sportswear, which requires less inventory and is viewed as an easier sell. Brands that offer both categories, such as Zegna, said nontailored items are accounting for a larger percentage of business these days.

“We are just living in a more informal world,” said Robert Ackerman, president and chief executive officer of Ermenegildo Zegna North America, adding that tailored clothing still accounts for the majority of his sales.

Deep discounts also have hampered the rebound. Last year, retailers such as The Men’s Wearhouse Inc. and Jos. A. Bank Clothiers Inc. ramped up buy-one-suit-get-one-free deals in a bid to boost sales and market share. Vendors said those not only trained consumers to expect promotions, they flooded the market. “How many suits will a guy buy in a year? One?” asked Bruce Zeitlin, vice president of sales for Smart Apparel, which makes tailored clothing for Nautica and Perry Ellis under license. “So he gets two, or maybe three with these promotions. He’s now off the table until 2013.”

But if last year’s discounts are hurting this year’s outlook, it hasn’t caused retailers to back off. Men’s Wearhouse said it will maintain its promotional posture through this year, adding it could take years to get back to regular pricing.

The retailer, which operates more than 1,000 units, has its own take on tailored clothing’s stall: employment. The company warned in its 2009 annual report that stagnant unemployment numbers would continue to impact the suit business this year. “We believe that these depressed market conditions affect us more than other retailers because discretionary spending for items like men’s tailored apparel tends to slow sooner and to recover later than for other retail purchases,” the company said. Sales at Men’s Wearhouse, which relies on tailored for more than half of its receipts, dropped 3 percent last year to $1.91 billion.

Working-age men are being hit harder in this recession. The unemployment rate for men over 20 years old was 10.1 percent last month, more than the general rate of 9.9 percent. Other vendors agree that until that rate falls and men return to the workplace in big numbers, suit sales will stagnate.

“Confidence is a big issue. Just look at what happened to the global markets in the last two weeks,” said Ammeen. “It’s a bit unstable still. Customers are still unsure about the future. Until there is some job creation and retailers are willing to rebuild the pipelines of business, [suit sales] will not materially improve.”

Nevertheless, vendors said their businesses are not as bad as the numbers suggest. In fact, those interviewed said sell-throughs have improved this year and comparative sales have been flat or edged up slightly.

Lanier Clothes, a division of Oxford Industries Inc., one of the few publicly traded companies with significant tailored clothing businesses, reversed its losses in the fourth quarter ended Jan. 30, posting income of $1.7 million, compared with a $1.4 million loss a year earlier.

That company pointed to strong sales of the proprietary Billy London line and unique items such as its extreme black suit for Kenneth Cole and Geoffrey Beene poly-viscose suit separates.

Even in a down market, vendors agreed there are some causes for optimism. Zegna’s slimmed-up core suit line is tracking well, as are Kroon’s casual blazers and Perry Ellis’ performance-fabric suits. Ackerman said advance bookings were up for fall, suggesting retailers’ mounting confidence.

Looking ahead, brands are also doing what they can to stimulate those unemployed, discount-hungry consumers by chasing trends. A glut of basic styles has created an opening for nonwool, seasonal goods next spring, vendors said, and Lanier is doubling down across all its brands, investing in light colors, cotton suits and 8.5-oz. fabrics. The company said seasonal tailored clothing could account for as much as 30 percent of revenues next spring, compared with just 5 percent three years before.

Smart Apparel is hoping a fresh silhouette, like the double-breasted suit, will ignite interest. “There’s an entire generation that hasn’t worn it. If it’s trim and on a younger guy, it looks so stylish,” said Zeitlin. “We as an industry need to decide what to push so there is a consistent message.”

“There is always a question of new product and introducing excitement, but it’s an evolutionary change,” Ammeen said. “There is no magic fabric or revolutionary garment that people have to have.”

The consumer isn’t the only problem. Rising costs of materials — from synthetics to cotton and wool — as well as accelerating freight prices, could force vendors to raise wholesale prices for next spring, a reality that doesn’t exactly dovetail with buy-one-get-one promotional strategies.