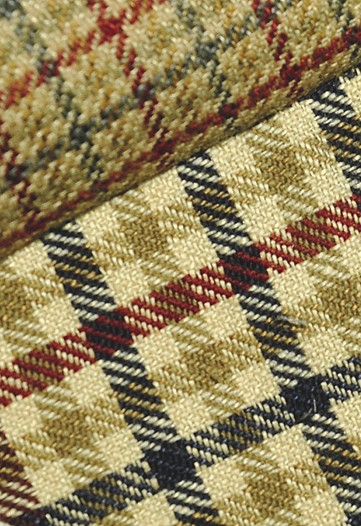 PARIS — Italy may be the mecca for high-end textiles, but with classic back in vogue — and aided by the depreciating British pound — men’s wear designers are turning to English and Scottish mills for their upcoming collections.

“There is a desire to return to the classics, and English mills offer that,” said Kris Van Assche, designer for Dior Homme as well as his eponymous line.

“It’s a very specific quality you don’t find in Italy,” said Lanvin’s men’s wear designer Lucas Ossendrijver. He lauded Scotland’s Reid & Taylor, weavers since 1837, for its high-quality men’s wear fabrics. “The fabrics in Italy are supersophisticated, but there’s something about the English manufacturers that is more authentic and exclusive.”

English and Scottish manufacturers showing at Première Vision in February said they are seeing the benefits of an emerging trend for authenticity and all things British — something that was evident in collections at Pitti Uomo in January and on the Milan and Paris runways this season, and is expected to extend into summer 2010, according to designers.

While summer is often seen as the Achilles’ heel of the British textile industry — heavier-weight traditional fabrics such as herringbone and tweed are a harder sell in comparison to the lighter-weight options available in Italy — British manufacturers’ extensive archives and unique manufacturing processes offer “unequaled” authenticity and exclusive handmade appeal.

“[British] manufacturers are set to benefit significantly from a renewed desire for quality and authenticity. Consumers will no longer pay premium prices for anything other than genuine materials with a guaranteed provenance,” said the British Wool Textile Export Corp.’s Peter Ackroyd. According to Ackroyd, men’s wear textiles account for around 85 percent of the total volume produced by the 40 existing apparel textile mills in the U.K. Japan represents the country’s key export market, followed by Italy and the United States. Ackroyd added that archives from British mills were broader than their Italian counterparts.

“There’s an iconic look about them, something which evokes the golden age of men’s wear when men wore the best available fabric,” explained Nick Hart. His Savile Row operation, Spencer Hart, is known for its edgy take on made-to-measure and bespoke suits made from the finest British manufacturers such as Moxon and worn by fellow Englishmen such as Robbie Williams and David Beckham. Designers also applauded Yorkshire-based Joseph H. Clissold, established in 1910, for its fine merino wool blended with silk, mohair, cashmere and bamboo as well as its use of bright colors, micro designs and techno-fabric blends. Following last year’s purchase by U.S. bespoke giant the Tom James Group, the mill has been given a new lease on life and expects to double sales within the next five years. In 2008, volume was expected to rise 15 percent to around 10 million British pounds, or $14.3 million at current exchange.

“English mills can compete now, there is a big opportunity for them,” said Hart. “[They] have a distinctive handwriting; Italian mills tend to sell a watered-down version,” Hart said, noting Italian fabrics tend to be “sleeker” and “very deluxe.”

Meanwhile, British manufacturers agreed that Continental designers and luxury maisons were increasingly looking across the English Channel for exclusive fabrics.

“There is a huge trend towards British fabric, there has been a miraculous change in fortune. Our cloths have never been more appreciated,” said Firas Chamsi-Pasha, chairman of Moxon Huddersfield, one of Britain’s most exclusive weavers. Take, for example, a wool and silk blend suiting with a discrete camouflage motif for 65 British pounds, or $93.20, per running meter.

“Italian [mills] had very clever marketing tactics — especially when promoting the Made in Italy label — which were far better than the English, but designers are looking for something more exclusive and unique,” said Chamsi-Pasha, adding Moxon boasts one of the largest “libraries” of vintage fabrics dating back 450 years to its start in 1556.

Abraham Moon & Sons Ltd., which supplies fabrics to designer labels including Paul Smith, is also benefiting from the shift.

“There is a trend for all things British, that means authentic fabrics with awareness of heritage, traceability and sustainability,” said Martin Aveyard, design director.