The new mobile app DesignLens from Empli, released this week, allows designers and other industry creatives to quickly turn images into patterns and prints on more than 140 fashion and lifestyle products, and share them with others.

“I had had one too many times sketching out an idea on the back of a napkin with eyeliner because inspiration struck, and I thought, ‘Wow, there must be a better way to do this,’” says DesignLens creator and Empli founder Austin Metka, 32, a fashion and textile designer and PVH Corp. alum who most recently designed ties for Michael by Michael Kors.

The iOS application ($1.99) Metka describes as a cross between a “visual twitter and Photoshop light” aims to make it easier to capture inspiration on the go and visualize images on popular contemporary examples of men’s and women’s apparel, accessories and home interiors products. Instead of spotting inspiration from, say, a building’s facade or street art and waiting to sketch it into a wearable format once you’d arrived back at your desk, designers need only have an iPhone.

According to Metka, “It lets you have that immediate communication with a real visual representation of what you’re hoping to create.”

Inside the app, users select from a template library with options ranging from evening gowns and suits to swimwear, lingerie, shoes, handbags, furniture and even a snowboard. They include both standard products and silhouettes created in collaboration with illustrator Anna Ulyashina. Taking a new image through the app or importing one from the iPhone’s camera roll, users tap in-app features to position, flip, rotate, filter, tile, mirror and otherwise manipulate the image into a finished design to save or share with teams and post on social media. An auto feature makes it possible to randomly manipulate images using the app’s built-in technology.

At a time when efficiency and transparency are hot topics among industry start-ups and established brands alike, Metka created the app for those with technical skills — and without. “It takes down some of the barriers. You don’t necessarily have to have skill with a paint brush to translate those designs to your mill in China or your local production,” she tells WWD.

While Metka envisions the app helping non-technical industry professionals deliver ideas efficiently to their teams and producers, she sees benefits for those who, like her, are more than capable of sketching on their own, thanks to the immediacy of the phone and the speed with which app users can produce a high-quality visual to show buyers, computer aided design teams or textile manufacturers producing fabric samples for future collections.

An updated version of the app Metka says she plans to release later this year will include the option to order designs created on the app directly through third-party custom apparel printers. 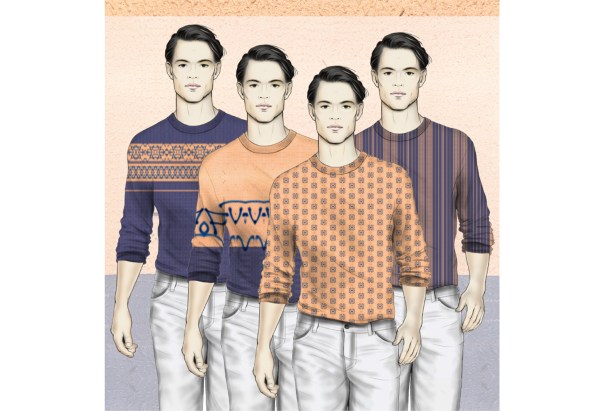 A sample from the DesignLens app.