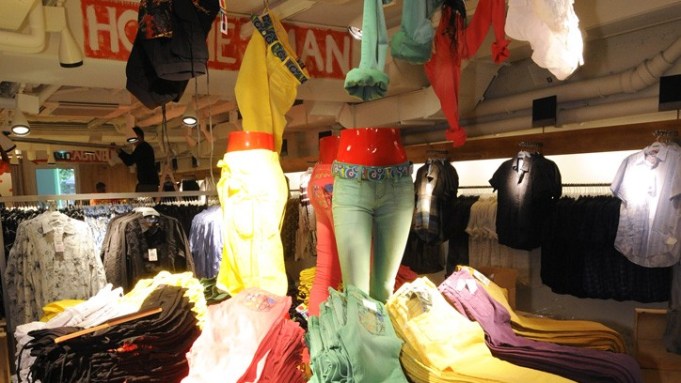 PARIS — Having almost doubled its revenues in 2009, Spanish fashion brand Desigual is launching online sales in September in a bid to boost business in key markets.

“The launch is designed to test that the logistics work, but our aim is to be global. It’s especially important for the U.S. market,” he said at the opening of the brand’s French flagship near the Paris Opera.

France is a key market for the brand and should account for 17 to 18 percent of sales in 2010, versus 13 percent the previous year.

“Last year represented a turning point for the brand in terms of becoming an international player because, for the first time, more than 50 percent of its sales came from outside of Spain,” said Ana Cabanas, marketing director of the company.

Though Europe remains the key market, the firm is also rapidly expanding in the United States, where Desigual launched two seasons ago. The brand is present in 1,000 multibrand stores in the U.S. and 35 corners in Macy’s department stores. It has also opened five stand-alone stores: two in New York, one in Miami, one in Las Vegas and one in Beverly Hills, with San Francisco and another New York location set to follow in the fall.

“We are optimistic about the American market, and it is also important with the evolution of the dollar,” Adell explained. “Being exposed only in Europe is not a good idea for a brand that aims to become global.”

Desigual sources 85 percent of its apparel in Asia and, although it does not plan to change suppliers as a result of the depreciating euro, it is looking to generate more revenue in dollars.

“Our strategy regarding the dollar is to develop the U.S. market in order to have more sales in dollars and benefit from natural hedging,” he said.

The company is also rapidly developing its children’s and accessories lines, introduced two years ago, which are set to generate as much revenue in 2010 as the whole company did in 2006 — close to 50 million euros, or $60 million.