Two fabric executives showing at Première Vision say it’s often the little things that make a big difference in a swatch of luxury.

PARIS — What do microchips and lace have in common? Lots, if... 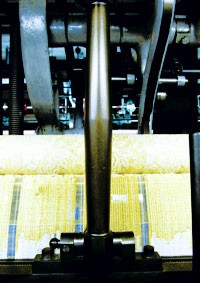 Two fabric executives showing at Première Vision say it’s often the little things that make a big difference in a swatch of luxury.

PARIS — What do microchips and lace have in common? Lots, if you ask Hervé Protais, president of the executive committee at French lace maker Solstiss.

“We’re just like Intel,” he averred. “We don’t make the finished product. We supply the innards of the machine. What we’ve been doing at Solstiss over the last few years is what Intel did by putting its ‘Intel Inside’ stickers on computers: getting the name out.”

In 2001, the company exhibited its textiles in a space at the Louvre museum. It had a show at the Galeries Lafayette department store here recently, and it even sponsored Cape Town Fashion Week.

“We’ve seen success,” said Protais, who joined Solstiss in 1986 as export manager and now owns one-sixth of the firm. “I fell in love with the company and the product from the start. I believe lace has a huge future.”

Protais wears several hats at the firm, which had sales of about $27 million, or 22 million euros at current exchange, last year. He’s commercial director, maps out strategy with the executive committee and liaises between clients and Solstiss’ six in-house designers.

And to be sure, lace designs have taken a quantum leap in creativity in recent years.

“The traditional French lace pattern was a rose, in white and ivory for bridal and black for bad news,” said Protais. “Today we have tropical flowers, spider nets, diamonds and bicycle wheels — with about 60 percent of our designs in color.

“Our ethic is about generating new ideas and pushing forward,” he added. “Finding ways of bringing lace to a younger market.”

Christian Lacroix, Jean Paul Gaultier and Ungaro are among the Paris couturiers who call on Solstiss.

“They always have new ideas and they help you in research and experimentation,” said Ungaro’s designer, Giambattitsa Valli. “They have a huge range of different styles of lace, from the most traditional to the most innovative.”

This season Louis Vuitton’s collection features a skirt decorated with Solstiss lace cut into LV logos, while the company supplied all of Rochas’ lace. Fast-fashion brands, such as Morgan, have even begun buying trims to decorate their collections.

“When people ask for Solstiss, I don’t want them to simply think of the fabric, but of the whole approach to design that our name represents,” said Protais. “We represent adventure and avant-gardism, a whole design concept rather than just a product.” — Katya Foreman

MILAN — Described as poetic, exploding with ideas and creative by Première Vision organizers, fabric designer Giovanni Orsini is quick to deny his characterization.

But for a man who sums up his latest collection as a “book of music you can just take a page out of,” it’s easy to see how he earned his reputation.

“I just follow my old road of instinct and inspiration,” said the designer from the offices of his company, Zibetti and Orsini, in Gallarate, north of Milan. And Orsini is inspired by everything — especially cinema, architecture and his passion for contemporary art.

Nevertheless, Orsini defines his style as always changing, achieved by treatments and technical know-how applied to layers of cloth.

“It’s a big design of adding pieces together then doing the unconventional,” said Orsini.

For his fall-winter 2005-2006 collection, Orsini has reinterpreted ethnic, Art Deco and romantic. An Indian-style cloth with tiny mirrors has been etched onto a wool flannel. Velvet style cottons in orange and bordeaux have been doubled and tripled up, then embroidered, cut and washed for a barely used look and a soft hand. Paillettes have been applied to tartan wool. The 350 designs have been created from a palette of bright greens, oranges and reds combined with cold grays, pearls and naturals in wool, cotton, silk satin and silk chiffon.

Orsini has been in the business for 40 years, after he entered the bridal textile company his grandfather started in 1905. The original family business separated into two companies in October 2003 —Zibetti Innocente and Figli is run by Orsini’s cousin, Innocente Zibetti.

With one year under its belt and an annual turnover of $6.1 million, or 5 million euros at current exchange, Zibetti and Orsini is small compared with other players on the Italian textile scene, but Orsini is sure the company has bright days ahead.

“What we do now is so beautiful, even more magical than what we were doing 30 years ago,” said Orsini. — Stephanie Epiro