Foreign textile manufacturers deal with the effects of a weak dollar. 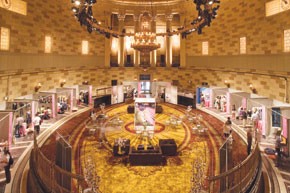 NEW YORK — Textile manufacturers exhibiting at the winter round of international textile shows here in January will have to contend with a weak dollar and the first glimmers of uncertainty regarding the economic strength of the U.S. market.

The currency issue will be of particular concern at Première Vision Preview, which will take place at the Metropolitan Pavilion Jan. 23 to 24. European mills make up the bulk of exhibitors at the show, and the low value of the dollar compared with the euro has been a growing problem over the last several years. Philippe Pasquet, chief executive officer of the Première Vision Group, recently completed a “trend tour” in which he visited PV exhibitors across Europe. Currency was a topic of discussion with each and Pasquet said many mills are working on strategies to best cope with the fact that they must remain committed to the American market despite the difficulties.

“There is an impact for sure,” said Pasquet. “Some European weavers are thinking they will have to concentrate on the 10, 15 or 20 of the best customers they have in the U.S.”

The fierce competition among U.S. brands and retailers and their need to differentiate themselves through new and innovative fabrics continue to fuel optimism among European weavers, according to Pasquet. Mills are also aware of the macroeconomic pressures that have been impacting the U.S. consumers, including rising energy prices and difficulties in the housing market. However, early reads on the holiday season indicate sales might not slump as dramatically as predicted.

“There are some concerns for sure, but [weavers] do agree with us that it would be a huge risk to give up such a market even for a couple of years,” he said. “We can’t do anything regarding the exchange rate, but we have to be consistent in the way we approach main markets, and the U.S. is certainly a main market.”

Première Vision Preview has established itself as the go-to show for the latest in quality and innovation, and the show’s organizers are confident that the current format is proving itself a winner. Exhibition space is typically filled to capacity and the number of attendees has grown. According to Pasquet, attendance at the summer edition of the show grew to 3,729, up from 3,318 last January. For this January, Pasquet said 110 exhibitors have already registered, representing 13 countries. He expects the final number of exhibitors to reach 130.

“We do think there is still a very great expectation from the American buyers toward the most creative things because of their own competition,” said Pasquet. “The key word at the moment is differentiation. At any level of the market the competition is huge among the retailers and brands. The new materials are key in that competition.

Texworld USA will be celebrating its fourth season exhibiting in New York and its second at the Jacob K. Javits Convention Center. The show is scheduled to run Jan. 22 to 24. The show made the move to the Javits Center in July in order to accommodate a significant expansion in the number of both exhibitors and attendees. The July edition drew approximately 2,500 attendees and 194 exhibitors from 16 countries. However, a scheduling conflict at Javits has forced the show into a smaller space within the convention center and, subsequently, forced the show’s organizers to limit the number of exhibitors.

“That unfortunately put us in a bit of a space bind, because the hall is only 18,000 square feet,” said Stephanie Everett, group show manager for Messe Frankfurt, which produces Texworld USA. “We were up well over 20,000 [square feet] for the last event. We’ve had to limit our exhibitors to smaller spaces, but it’s a one-time situation we’re dealing with.”

Everett focused on getting those mills that had exhibited at previous editions of the show back in, and keeping the total number of exhibitors above 150 in order to make it relevant to buyers. The show currently has 151 exhibitors from 14 countries, and Everett said the show will have twice the exhibition space to work with and enlarge the show for the next summer edition.

Everett said the biggest challenge for exhibitors, the bulk of which come from Asian countries, remains difficulties with language.

“I still think the biggest challenge is really that language barrier,” she said. “Their products are great and they’re competing with European mills,” but communication is still difficult. Despite this, Everett said she has seen evidence that American brands and retailers are realizing they can get their needs met at the show. Brands that sent one or two buyers to previous editions of the show are sending between six and eight this year, she said. Early registrations are up 60 percent so far.

Prefab: The Supima Premium Fabric Show returns to Gotham Hall Jan. 22 to 24 with a lineup of 15 exhibitors.

“We’re really trying to get a representative group that shows what’s going on with Supima,” said Buxton Midyette, marketing director for Supima. “We want to offer the buyers the product they’re looking for, whether it’s woven bottom weights or twills knits and fine shirting. We also want to make sure we have the geographic representation that will fit their sourcing needs.”

Pima is the generic name for extralong staple cotton grown primarily in the U.S., Australia and Peru. It is also a premium textile, costing upward of 50 percent more than conventional cotton. Midyette said the higher-end apparel market has continued to perform well despite recent broader market concerns.

“We’re seeing a lot of strength, particularly in knits,” said Midyette. “That’s a category where Supima is doing extremely well.” Supima has traditionally been used in shirting, but Midyette said a boom in the contemporary fashion market is spurring the push into knits.

The craze for organic materials has been slower to influence the Supima market, primarily because the fiber already faces premium pricing. However, Supima is touting the fiber as a sustainable product because it is stronger than conventional cotton, giving finished garments a longer life cycle.

“The Supima customer is really looking for performance, comfort and longevity,” said Midyette. “These are clothes that are an investment…it’s the exact opposite of throwaway fashion.” Less than 1 percent of Supima is grown organically at this point, according to Midyette. He expects between 800 and 900 people to attend the show.

The Turkish Fashion Fabric Exhibition will take place at the Skylight Ballroom at the Puck Building Jan. 22 to 23. The show, organized by the Istanbul Textiles and Apparel Exporters Association, has seen the number of exhibitors steadily shrink over the last several years. Approximately 20 mills exhibited at the July show, the first at the Puck Building.