The Miami Heat guard is stepping up his off-court fashion initiatives. 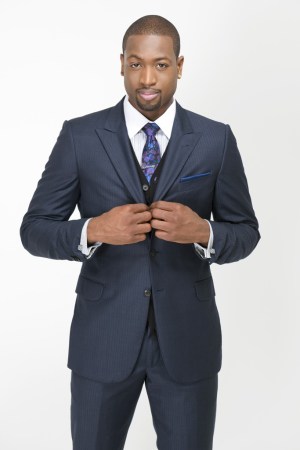 After a slow start to the season, the NBA’s Miami Heat have won four of their last five games — and guard Dwyane Wade is stepping up his off-court fashion initiatives, as well.

On Wednesday, Wade will introduce a collection of neckwear and accessories with The Tie Bar, available on the Chicago-based company’s e-commerce site. The range will offer 30 bow ties, 15 neckties and 15 pocket squares, as well as seven tie bars and four cuff-link styles, under the Dwyane Wade for The Tie Bar label. The ties and bow ties will retail for $25, the tie bars for $20 and the cuff links for $30.

The launch follows a line of socks with Stance, under The Wade Collection name, that made their debut in stores earlier this month. The designs encompass 13 brightly colored patterns available at Champs stores and boutiques like Premium Goods, Shoe Gallery, Unknwn and Sole Fly.

“It’s an opportunity to do something unique and cool,” said Wade. “My whole thing is to bring my taste, my style, my fashion to whatever I’m a part of.”

The partnerships with Stance and The Tie Bar stemmed from Wade’s particular interest in those categories. “Everything I’m a part of, I want it to be authentic to who I am. So if I don’t use it and I’m not a fan of it, I don’t want to put my name and face to it. I’m one of those guys who Instagrams my socks and my sneakers…and I wear a lot of ties,” he explained. “I like to say we started from the bottom, literally, with the sneakers and the socks and now we’re up to neckwear.”

Wade’s biggest fashion endorsement is with China-based Li-Ning footwear. He also has deals with Hublot watches and Dove skin care. Wade and his managers hosted a “Brand Wade” summit in September, bringing together all his brand partners for a one-day strategy session in Miami.

“It’s a chance for everyone to get to know each other and get a chance to be on the same page,” explained Wade. “The Tie Bar and Stance and Li-Ning can all talk and communicate and say, ‘OK, when are you coming out with this and maybe we can come out with something similar to tie back to it and tell a story.’”

Wade said he and Li-Ning are working on creating an activewear collection to complement the footwear line, set for a 2014 release.

“Partnering with Dwyane was a no-brainer for us. He is a trailblazer on and off the court, particularly in the way he expresses style,” said Anand Shah, chief executive officer of The Tie Bar. The partnership, scheduled for at least a year, was brokered by Wade’s agents at CAA Sports.

“If I had to choose one word about my style, I’d say that I’m unpredictable,” said Wade, who has a longstanding relationship with stylist Calyann Barnett for his wardrobe. “Me and her have a great relationship. She has pushed me over the years to step out of the box and try something different and I’m able to bring my style to it.”

RELATED STORY: Jets Walk the Walk at Taste of the NFL >>