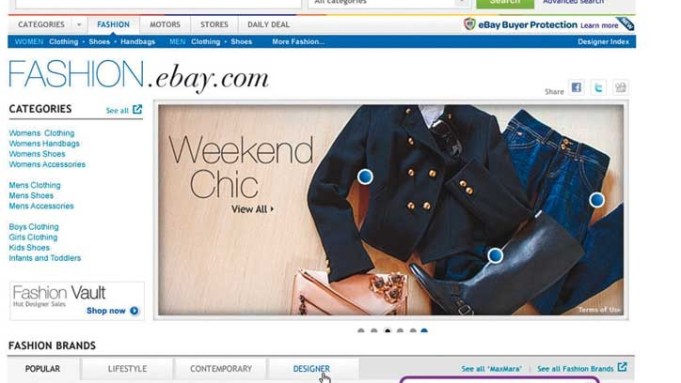 EBay Inc. moves more apparel online than any other company. Yet that’s simply not enough for the giant Web site.

In March, eBay will launch “the fashion vault” for “flash” sales of designer goods in a format not dissimilar from that of Web sites Gilt Groupe and Ideeli. Hugo Boss, DKNY, Max Mara and Cole Haan Outerwear were tested last year and there’s a good chance they’ll be seen on the fashion vault again. Initially, there will be weekly flashes, but the frequency will increase in subsequent months.

EBay also is creating an online outlet mall for the U.S. with some well-known retail and apparel brands. Lord & Taylor’s outlet division is already on board and Brooks Brothers will be added next month. More brands and stores are seen joining, as they have in Europe, where eBay operates extensive outlet sites, such as in the U.K. with 16 stores including Debenhams, House of Fraser and Schuh, and in Germany, with 24 branded apparel shops including Eastpak, Fila, Speedo and Triumph.

There’s more to the program. In early April, eBay will unveil enhanced visual search technology for clothes, shoes and accessories, listed as the CSA category, to enable visitors to find products by style as well by brand or price. There will be better visuals and trend commentary from stylists, with additional technology features continuing to roll out through the year.

And if eBay has its way, the recently launched Norma Kamali and Narciso Rodriguez capsule collections are just the beginning of the site forming exclusive tie-ups with designers and brands. EBay officials have been scouring showrooms and had a bigger presence at New York Fashion Week to sow seeds for additional exclusives. No further designer deals have been signed yet, but eBay says at least one new designer exclusive will launch in September. EBay supports the designers with homepage and other on-site placements, creating branded storefronts that reflect their image and design sensibility, public relations, customized e-mails to millions of eBay fashion buyers and improved visibility in online key word search results.

“There’s great opportunity for eBay in the category,” eBay president and chief executive officer John Donahoe told WWD exclusively of the Web site’s moves in fashion. “We can offer incredible value and selection for fashion shoppers, and create new business models and channels of distribution for apparel brands and retailers.”

“We are playing to our strengths,” added Lorrie Norrington, president of eBay Marketplaces. “EBay is the number-one clothing site on the Internet,” with $7.1 billion worth of apparel products sold last year. Only cars, trucks, motorcycles and auto part sales — the motor category — surpass those of apparel on eBay, she added.

“Whether it’s Tory Burch or Levi’s jeans, we’ve got it,” Norrington said. “It’s hard to imagine having 10 million items on the shelves — just clothing items — but we have that. We are focused on taking that store with great values and great inventory and really unlocking that in new ways. We want to have a complement of experiences.”

The Rodriguez deal, launched last week, benefits both parties, giving eBay some cachet and the designer an e-commerce site and new audience for a small and different array of products at prices significantly lower than his regular collection. Kathy Kalesti, president of Narciso Rodriguez, said the eBay line had more than 300,000 visits in its first two days last week and “continues to grow every day.”

“A lot is still up in the air for the fall. We want Narciso to come back” with a second eBay exclusive collection, though it will take three to four months of selling to determine the success of the line, Norrington said.

For all its activity, eBay doesn’t spend a penny on apparel, or any other goods. It’s a marketplace with 90 million active buyers and sellers. The e-commerce company makes money by charging sellers fees for listing their merchandise on the site and commissions when the merchandise is sold. EBay last year reported $8.7 billion in revenues and $2.4 billion in net income on a generally accepted accounting principles basis.

With its vast product listings and mundane visuals generally, eBay can be a laborious experience with a flea market aura. The plan is to refine the Web site with fashion pages that are easier to search, appear more stylish and editorially informed and maintain the focus on offering values and bargains. The changes hopefully will enable eBay to attract more brands, retailers and designers and encourage shoppers to browse and, to a greater extent, wardrobe via the site. At present, most visitors tend to search eBay for something specific and leave it at that. “More like this” technology will enable buyers to see items similar to the one they initially searched. There also will be a fashion tab on the homepage, a stylist hub page and an additional address, Fashion.eBay.com.

EBay says it sells a dress and a pair of women’s jeans every 18 seconds and a pair of shoes every three seconds, and that its core fashion customers are women in their 20s and 30s seeking value and style. On the mobile front, since launching an iPhone application in 2008, apparel has emerged as eBay’s number-one mobile category in terms of items sold. By the end of last year, more than $600 million of all types of merchandise was purchased via eBay mobile.

Through the enhancements and new shopping formats, there will be more selling at fixed prices rather than through auction. “We see consumers consistently buying more fixed price,” Norrington said. “Auctions is a great format for items of unknown value [like vintage]. But fixed price has always been a faster format for growing than auction.”

With additional designers, brands and retailers coming onto eBay to sell direct to consumers, there’s the potential to cannibalize business away from smaller sellers. But Donahoe said, “EBay sellers already compete with brands and retailers. Bringing onto eBay more great merchandise that our customers are looking for helps all sellers. More selection creates a more robust marketplace and builds demand.”

The efforts also reflect eBay’s intent to build trust among consumers that they won’t get stuck with a counterfeit item, since they will be buying increasingly directly from brands rather than third parties. EBay has faced a barrage of lawsuits involving charges of selling counterfeits.

In effect, the new apparel program puts eBay in more direct competition with the likes of Target Corp., J.C. Penney Co. Inc., Macy’s Inc. or any retailer seeking exclusive designer lines, as well as Web sites such as Gilt Groupe and Ideeli. These sites rapidly have grown off the popularity of flash sales, where there’s limited time to buy a limited quantity of designer goods at deep discounts, often more than 60 percent off.

In the fall, eBay formed a dedicated fashion team including marketing, business development and p.r. officials as well as a general manager. It’s geared toward strengthening the company’s presence in the markets, getting additional exclusives and building up the U.S. outlet site.

“Watch us do more with fashion. We are determined to transform the industry,” Norrington said. “Most people are not aware of what we can do. At fashion week, we came out collectively for the first time.”

“Apparel is just a starting point for us as we improve the shopping experience across eBay and expand selection,” said Donahoe. “We’ve also made a lot of changes in the past year to create better experiences in categories such as motors.”