The store, a carefully curated, 600-square-foot boutique in SoHo, is the first to showcase the company’s entire collection. 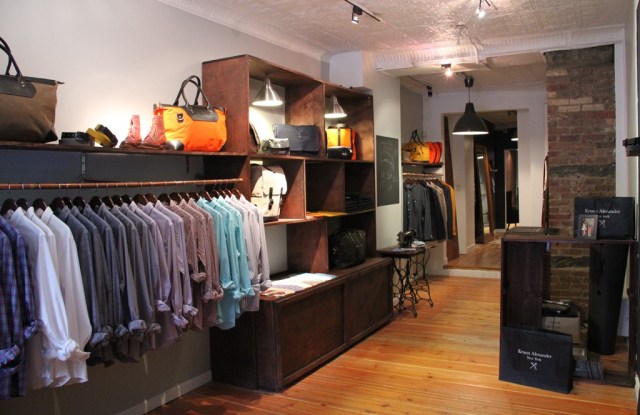 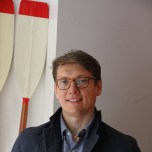 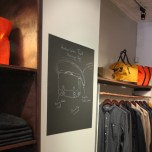 The men’s wear brand, which made its debut three years ago with heritage-inspired bags and accessories, has since expanded into apparel with jeans, blazers, dress and sport shirts and neckwear — all with the same sensibility. Its mission is to produce a collection “in the tradition of classic men’s wear, adding a touch of panache and gentlemanly flair,” according to its Web site.

The line is also manufactured exclusively in America, another hallmark of the brand.

“We make everything in the U.S.,” said Ernest Sabine, creative director. “Ninety-five percent is actually made in the Garment District of New York City.” Although manufacturing domestically costs more than producing overseas, he said the Ernest Alexander customer understands and appreciates that.

“It’s premium, but well-priced,” he added. Fabrics include wax cottons, a signature of the label, as well as detailing such as contrasting linings, double stitching, zipper pulls and extra pockets.

The store also offers a selection of handcrafted riding boots by E. Vogel, another domestic manufacturer, that will retail for around $695.

The store, which is located on Thompson Street between Spring and Prince Streets, is the first to showcase the company’s entire collection. The brand is also carried at Paul Smith and Club Monaco stores in the U.S. and overseas as well as through its own Web site. “The marketplace is so crowded,” he said, “and we want to stand out. So we align ourselves with retailers who appreciate heritage. Paul Smith is a genius and maintains a sense of specialness in his collections. That’s what we’re trying to achieve — the American version of that.”

Sabine, who worked in fashion advertising before starting the label, said he “always wanted to make clothes. I wound up in business school and thought I’d get some fancy bank job, but that’s not for me.”

His touch is also evident in the store design, which includes found items such as vintage sewing tables, old snowshoes and nautical ropes and oars. The cabinetry in the store is all hand-built for the space, which has a “gentleman’s dressing room vibe,” he said.

Looking ahead, Sabine said he would like to open more stores around the world and expand upon its e-commerce business. “The direct business is very attractive to us,” he said. He said the New York store is “an anchor, because we make everything here, but we would also like to be in Tokyo where the whole American heritage thing is so strong. Our plan is to have smaller freestanding stores across the globe.”

The SoHo store will open to the public on June 8. A press preview is slated for today.