European Mills Look on Brighter Side

Fabric mills at European Preview were worrying about the weakened dollar, but were shrugging off China’s impact next year. 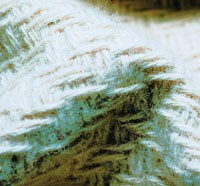 NEW YORK — Fabric mills exhibiting at the European Preview show last week are dealing with a weakened dollar, though they weren’t fixated on China’s production potential, which has been causing strife for sourcing around the world.

That attitude was reflected in the popularity of brightly colored collections at the show, which ran Wednesday and Thursday at Manhattan’s Metropolitan Pavilion. European Preview also included Italian mills that had shown at I-Textile, which was produced by the Italian Trade Commission and had its last edition in October.

There were 146 exhibitors at the show, and more than 3,000 people attended. European Preview looks ahead to Première Vision, the large fabric show set for Sept. 21-24 in Paris.

Many mill executives and sales agents discussed the weakened position of the dollar against the euro. Over the past two years, the currencies have gone from being roughly on par to a dollar buying just over 0.8 euros.

“It’s quite difficult to set a price for the whole season,” said Alessandro Barni, chief executive officer of Bel & Co, a mill based in Prato, Italy.

Phil Fox, president of Fox Fabrics Inc., a sales agency with offices in New York and Los Angeles, put a positive spin on the situation: “The only negative that we’re still encountering is the weak dollar versus the euro,” he said.

Prices are 30 to 40 percent higher than in 2002 because of the currency shift, he said. Otherwise, Fox said the traffic at the show was good.

“We’ve seen all of our best customers,” he said.

Mills were also watching the pending drop of quotas on apparel and textiles by the 147 countries of the World Trade Organization at the end of this year. This is anticipated to open the way for low-wage and high-capacity countries, particularly China, to pick up market share in all areas of the apparel supply chain.

“I don’t think it’s going to do that much, because there’s still a lot of inconsistency coming out of China,’’ Fox said.

Similarly, sales agent Francesca DeVito, president of her namesake firm, said, “There’s going to be a lot of people who are definitely going to go to China, but you can’t do everything in China or [South] Korea.”

The workmanship between fabrics produced in those countries and in Europe differs, she said.

“These qualities cannot be duplicated in China because of the yarns and weaving,” DeVito added, waving her hand at a rack of samples.

DeVito said business was picking up at the show, with buyers still looking for summer 2005 and getting a peek at fall fabrics.

“People are coming, and they’re more specific about what they’re looking for,” she said. “People who are looking now are serious. There are so many of us out there, they don’t have time to just look.”

The bigger firms with several divisions were “getting better at knowing each of their divisions and who their buyer is,” she said.

The Italian mills seemed to be pleased to be back.

Nicola Nannucci, export manager at Nannucci & C., based in Prato, said it was better for I-Textile and European Preview to merge back into one.

“Here, you can find everybody,” he said. Overall, Nannucci said the show was good, with plenty of potential customers.

“It’s much, much better to be together,” said Bel & Co.’s Barni. “It’s better service for the customer. They don’t have to share the date.”

Gera Gallico, president of New York-based Vinci Inc., who was selling the lines of five mills at the show, said each of the businesses had increased over a year ago at European Preview.

“People are excited…because there is a lot of newness at the show,” she said. “In every line, I have more newness than in the previous seasons.”

“We’re all a little bit more used to the higher prices,” she said. “We’re not worried about maintaining figures. It’s not a math-oriented show. It’s more of a creative show.”

The biggest trend news was the importance of color, which was seen on an abundance of tweeds and textured goods. However, a new direction also emerged with a move toward quieter textures and colors. Many mills showed both looks.

At Picchi, novel looks continued in the form of chunky, multicolor tweeds.

“Color is not going away,” said Fred Rottman, president of the mill’s U.S. operations. He pointed out burgundy, purple, green, blue and especially pink as hot colors. “Pink just won’t give up,” he said.

In addition to all the bright tweeds, a group of peach wool blends showed the mill’s softer side. Made of wool and nylon, the collection featured quieter textures that included chevrons, as well as large and small basketweaves.

At Luigi Boggio Casero, located in Italy’s Biella region, a softer approach was also seen in the collection of blurred tweeds with touches of color or metallics. As far as brights, the mill showed a mélange of looks with green, turquoise, pink and violet.

“To use so much color is really new for us,” said president Eugenio Boggio Casero.

Other mills with both looks included Borgosesia, Italy-based Tessitura di Crevacuore, with both brilliantly colored tweeds and softer patterns in ivory, as well as French mill Clarenson, where tweeds are still strong, according to president Oliver Clarenson.

“The purples, oranges and greens are doing especially well,” he said. He also showed textured plains in purple and camel.

For some buyers, all the color and tweed was a bit much.

“I’m amazed that the tweed thing is still going and that’s it’s continuing with such gusto,” said Sarah Lord, vice president of fabric development at Polo Ralph Lauren Corp. “It’s still a little early to see where it will all go.”

As for color, Lord was veering toward the paler, washed-out tones. She said, “They just look fresher to me.”

Tweeds in “night bright” colors looked the best to Stephanie Schaich, whose eponymous line is a division of Barry Bricken.

“They’re the new tweeds for me,” Schaich said. “Whereas before, the trend in tweed colors was inspired by the Forties and Fifties, now richer, almost Byzantine brights that are shot with colored Lurex are going to be important going forward.”

Her favorite group of hues, meanwhile, centered around saturated shades of blue.

“I really liked the intense cobalt blues,” she said. “They’re rich and velvety.”

“We feel it’s important to diversify the tweed look a little, so this season we really concentrated on specialty yarns that give a more traditional British look in place of the fancier look,” he said, noting that ethnic looks were also key. “The ethnic brights mixed with the faded florals look really fresh this season.”

Gratacos, meanwhile, continued with its novelty looks that use special yarns to achieve strong contrasts in texture and color. Prints, meanwhile, also gave buyers a feast of color. At Marc Rozier, brightly colored velvets were dyed, burned out and then overprinted. In contrast, there was also a softly colored print with a motif taken from a butterfly’s wing, featured on silk.

Mantero also showed a mix of the different trends with saturated prints and jacquards, as well as a wool mesh that used navy as a base, and a jacquard with purple, orange and touches of Lurex that was placed on a beige ground.

Polo’s Lord felt that metallics are fast becoming a staple. “What neutrals were to the Nineties, is what color and metallics are to us now,” she said.

Bianchini Férier, the French fabric house known for its colorful prints, delivered some deeply saturated looks on silk. At Weisbrod Zürrer, based in Hausen Am Albis, Switzerland, three different colorways — soft pastels, burnt midtones, and deep darks — defined the collection. Highlights included a large, colorful patchwork made of an acetate blend and a black tweed with a glossy, laminated jacquard design.