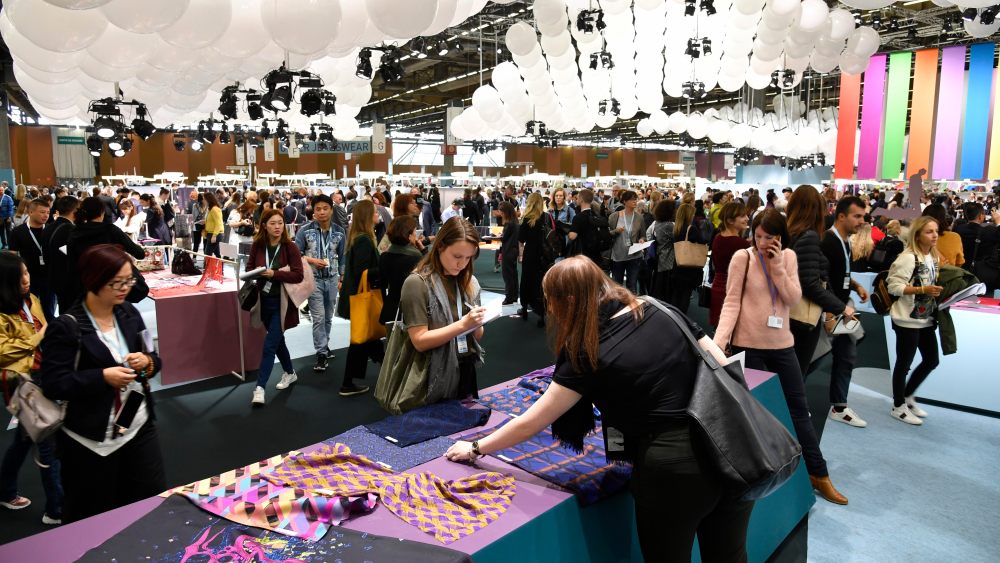 PARIS — After a prolonged period of uncertainty further impacted by terrorist attacks, Europe’s creative textiles industry is showing signs of recovery, according to Gilles Lasbordes, general manager of Première Vision Group, who at the recent edition of Première Vision Paris here cited an “economic dynamism” that seems to indicate “a real, though still fragile, revival.”

The three-day salon saw a 7.5 percent increase in traffic, surpassing 60,000 visitors, and a 3 percent uptick in exhibitors.

According to the results of the latest Première Vision Barometer — billed as an indicator of the business activity of all the companies participating in the show, and by extension of the activity of the international creative fashion industry — following a mixed year in 2016, manufacturing volumes appear to have stopped declining, with certain exhibitors citing an actual turnaround, driven by a “significantly higher” upturn in orders.

The U.S. market, by contrast, continues to be “severely affected” by the transformation of retail to digital. “American companies are adapting to evolving domestic consumption, and to European competition with a command of rapid product renewal or strong creativity,” the report said. Brands are looking for different sourcing solutions, be it linked to proximity, volume, or more specialized services.

In 2016, the show’s exhibitors registered an average increase of 1.7 percent in volume versus 2015, largely outpacing the Global Index of Textile Production, the UNIDO index, which was down 0.1 percent, according the report. Regarding weavers based in developed economies, the index is even more striking, with a growth of 1.9 percent versus a 0.1 percent decline for the Textile World Production Index.

Things aren’t looking so rosy for the show’s leather specialists, with an 0.8 percent decline in volume year-over-year versus a 0.5 percent decline for the global index of leather production.

Three strengthening trends were identified: The relocation of raw material purchases and manufacturing produced in the Euromed zone; a shortening of time-to-market, reflected in later but more numerous collection processes, with a multiplication of collections, and increased demand for exclusivities to bolster creativity.

As reported, Lasbordes at the event announced the planned launch of an online marketplace connecting buyers with the fair’s exhibitors and their collections around the clock.

Première Vision Digital, a wholly owned subsidiary created in order to operate the new initiative, is due to launch in the second half of 2018 and will function as a B2B e-commerce site offering an edited catalogue of products from exhibitors’ collections; an editorial platform covering seasonal fashion trends and product information, and a service provider.

Lasbordes also highlighted the fair’s “strategic evolution in terms of offer” with the integration of The Sourcing Collection, a salon that until now has been held at an exterior venue in Paris presenting an edited selection of confectioners from the Asia-Pacific region.

Organizers also opened up the manufacturing offer to include companies from the footwear and leather goods sectors with a Bag and Shoe Manufacturing space in the heart of the leather salon.

The session’s focus country was Tunisia.

The show’s Smart Creation Première Vision platform this edition played out across an exhibition area structured across five zones: Smart Library, Smart Services, Smart Facts, Smart Talks and Smart Wardrobe. A key topic was circular economy, where the waste from one industry is recycled as the raw material for another industry or for itself. The Smart Wardrobe area showcased a range of finished product including a Gucci coat in sustainable cashmere from Re.Verso in reengineered wool based on pre-consumer manufacturing scraps.

The show’s Wearable Lab, dedicated to evolutions in Wearables and Fashion Tech, presented a round table led by Noémie Balmat, founder of Clausette magazine, which opened with a dress that Marlène Dietrich dreamt of 25 years ago, produced by studio ElektroCouture. Dubbed Marlène Glows, the dress features 3-D-printed flower embroidery and glowing crystals with LEDs made in collaboration with Swarovski.

The winner of the PV Fabrics Grand Jury Prize 2017, under a jury presided over by John Malkovich, went to heritage Japanese mill A-Girls for its innovative fine-gauge knit using a superstiff yarn, while the winner of the inaugural PV Fabrics Fashion Smart Creation Prize went to Schoeller Textil.

Malkovich, who recently released three superlimited capsule collections “that ostensibly go together” from his “Technobohemian” men’s wear line, talked to WWD about his own love of fabrics. “I can’t think of anything I’d rather do or look at,” he said as a regular visitor to the fair. “It sets you off on a whole dreamscape of what you could do.”

Among designers spotted in the stands, Walter Van Beirendonck said he was interested in “that clash between old-fashioned British cloths and high technology.” Barbara Bui lauded the array of soft coating fabrics in faux furs. New York’s Devon Scott said he’d seen a lot of workwear and military styles fused with tailoring cloths.

“We’re really excited about the outerwear fabrics we’ve found, especially the double knot — they have the structure of a woven but the comfort of a knit, it fits with the car coat trend,” said Jeremy Pilch, a design manager of several categories at Lilly Pulitzer.

Mills cited strong demand for creativity from brands as a marker of differentiation. Ratti, a global leader in silk fabric production, and part of the Marzotto Group, had even conceived a collection based on showcasing their elastic approach to creativity.

Mario Ratti, the firm’s director, said he got one of his print designers to dream up a highly complex pattern and then asked his teams to interpret it, “to use their expertise to bring as much innovation as possible, in any fabric and any category in order to demonstrate to the customer that we can handle any demands.”

“Today the ideas are coming from anywhere, especially social channels; it’s not so much the old idea of going into the archives.”

Ratti also showcased a new technique based on printing on finished garments, printing by piece, to give a special artisanal touch. “Prada made its last collection based on this idea, working with us,” he said.

In response to the turbulent times that brands are facing, the company recently changed its strategy to enhance reactivity and cater to “needs — across creativity, delivery and pricing,” and it seems to be working.

The projection for 2017 is a 15 percent increase in sales year-over-year, following revenues of around 92 million euros in 2016, Ratti said.

Innovations showcased at Eurojersey included a garment-washed legging, still with a technical performance.

“Customers are asking more and more what will be the next thing on from leggings or the five-pocket pants with skinny legs,” said sales director Matteo Cecchi.

Stretch performance is a growing topic, he said. “We see this contamination from activewear to ready-to-wear more and more, but there’s also contamination from the underwear category to activewear, we are seeing a lot of growth in sports underwear. Lots of our U.S. customers are saying that consumers are paying premium prices for a sports bra that they can wear daily.”

Ariane Bigot, the fair’s deputy fashion director, pointed to two key textile trends for fall 2018: strange fabrics mixing darkness with a hint of humor (think swirling patterns evoking an Edvard Munch painting or spiderweb lace; and fabrics with an element of surprise “that speak on two levels,” offering a twist between the visual and handle.

Shine is also back in a big way, she confirmed.

The show’s trend forum, decorated with a cloud of giant white balloons that popped under the heat of the lamps, creating the sound of gunshots much to the displeasure of nearby exhibitors, had every variety of shine on display spanning gloss, liquid lacquers, futuristic twists on moiré, and metallics with colored vibrations to give movement.

“Matte has been strong for nearly 10 years, with shine kept to details to animate fabrics. We see this season fabrics in different fields with a strong contemporary shine, in silks, technical fabrics, woollens and suiting fabrics. Fabrics for both daily life and evening occasions.”

Double-faced fabrics pairing unexpected combinations and joined without the use of glue — using needle punching, for instance — were also prevalent.

Authentic traditional cloths like Prince of Wales, tartans and glen checks came revisited in a variety of ways, offering a punk idea of playing with classics. “Mills are tweaking them in a kind of anarchic, naughty way,” said textile consultant Beryl Gibson at the show’s UKFT stand.

Reversibles was also a trend from mills including Alex Begg, with among other highlights a striking range of men’s wear jacquards by Stephen Walters, who do a lot of the ties for Hermès. “It’s their take on Savile Row, but in a more decorative way,” she said.

Tailored cloths in relaxed country tones was another focus, while the palette of dark purples and browns in men’s cloths pointed to “confidence in color and textures.”

“There are fewer blacks coming through from the mills compared to previous seasons,” said Gibson. “Color is a huge vehicle for creating newness; even if it’s a classic design, recoloring it pushes the market forward.”