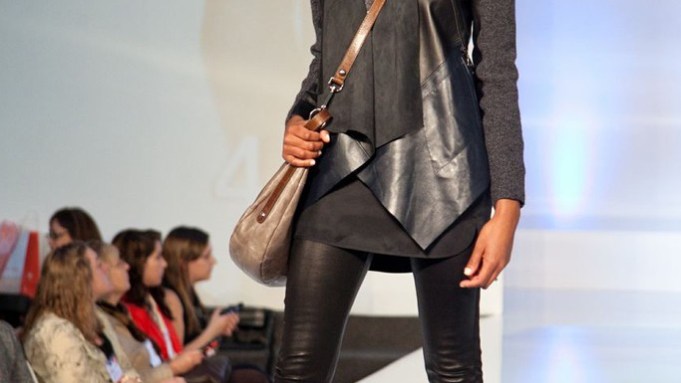 ATLANTA — Eye-grabbing colors, texture, and leather and fur were top trends cited by buyers that will spur shoppers to spend this fall.

“It’s taking classics and translating them in imaginative ways,” said Elaine Everest, co-owner of Persnickety in Abingdon, Va., who was shopping the Atlanta Apparel Show, held April 11 to 15 at AmericasMart.

Julie Routenberg, owner of Potpourri in Atlanta, said her budget was up 10 percent based on “a great 2012.”

“I feel business has opened up,” she said. “People are spending more money and they’re feeling more confident. And the stock market has been delightfully high for a long time. I feel very confident about [fall].”

LouAnn Thomas, director of marketing at AmericasMart, said the show’s temporary space is the largest it’s ever been and 18 percent larger than the April 2012 show. Thirty percent of the increase is due to new exhibitors.

While cold, rainy weather had a negative affect on early spring sales, retailers said business was better this month and they expect a strong spring and summer. Kristyn Prentice, buyer for Island Passage, which has six units in Wilmington, N.C., said, “We anticipate sales will be higher than last year because our customer is feeling better about the economy and looking forward to warm weather.”

Prentice added that Island Passage has been buying closer to season since 2008. That tactic has reduced markdown and increased turnover. “It’s been working for us for four years now,” she said.

Buyers focused on fall, but Island Passage bought spring and summer, including printed tops and pants. “We’re buying anything beachy and Bohemian…and anything silky and comfortable,” said Prentice.

Janet Cherry, buyer at The Village Shoppe in Muscle Shoals, Ala., bought big, bold necklaces, fitted jackets, apparel with fur and leather trim, lightweight outerwear, coated spandex leggings and skinny jeans. The store has done well with a new line of colorful purses from My Flat in London.

Cherry said her business has been “excellent for the last two years,” adding that spring is up about 5 percent so far with strength in colored jeans and tops, as well as gauzy fabrics. She has planned fall up, but is buying the same as in 2012.

The biggest trend for fall, she said, is leather with another fabric, including chiffon and knits. In bottoms, it’s leggings and narrow, straight-leg pants. She also pointed out knits and novelty cashmeres as trending up.

Spring sales are up 15 to 18 percent so far at Persnickety, said David Everest, adding, “Things were very subdued two years ago. We focused on color at the last market, and it’s paying off.”