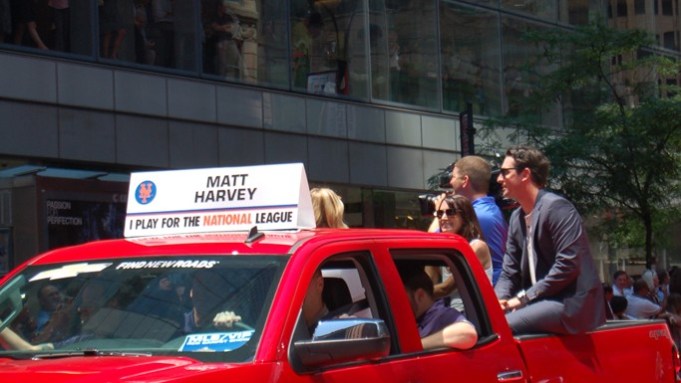 Think gifting suites are only for the Academy Awards? Think again.

Nicole Miller, Tommy Bahama and Vineyard Vines were among the brands that lured Major League Baseball’s All-Stars to the New York’s Bryant Park Grill on Tuesday for some swag prior to the Red Carpet Show down 42nd Street. The 84th annual Midsummer Classic was scheduled to be held at Citi Field, home of the Mets, Tuesday night and the players and some Mets legends greeted fans from the back of Chevy Silverados as they made their way from Sixth Avenue to Third Avenue.

The players stopped by the restaurant before boarding the trucks to stay out of the 90-degree-plus temperatures, swig some water and catch up with friends and family. Among those who made an appearance were Mets stars David Wright and Matt Harvey, Bryce Harper and Carlos Beltran. Harvey, who recently appeared naked in ESPN the Magazine, opted for a Tommy Hilfiger suit for his red-carpet ride and said he’s ready to take a break from posing for magazines for a while.

Many parallels have been drawn between the power pitching right-hander and Mets legend Tom Seaver, who served as grand marshal of the parade. Seaver said he’d never actually seen Harvey pitch. “I live in California now,” said the Hall of Famer who is now a vintner and makes his own wine. “But his numbers are great. I read the box scores and I’m a guy who really knows how to read them. He does a lot of things correctly.”

RELATED STORY: Retailers Get In the All-Star Game >>

Also in attendance was Dwight “Doc” Gooden, the other legendary Mets hurler. Gooden recently penned a book called “Doc: A Memoir” that came out in early June. “It’s not really a baseball book,” he said. “It’s more about the ups and down of my life and how I started. It talks about the drugs and the alcohol. It was great therapy for me and for those in similar situations as myself.”

In the gifting suite, Nicole Miller handed out iPhone 5 cases with prints from the collection; Vineyard Vines offered a leather handle tote with a custom embroidered All-Star Game logo; Tommy Bahama handed out a leather and canvas dopp travel kit with a candle and cologne; Bobbi Brown offered an assortment of makeup palettes, lip colors and bronzes, and jewelry designer Helen Ficalora gifted a 14-karat gold XOX charm with a diamond inset. Miller dressed around 24 of the players’ wives or girlfriends, and new contemporary dress brand 4.collective dressed about 20. Bobbi Brown did the makeup.

Bud Konheim, chief executive officer of Nicole Miller, said the company has been participating in the gifting process for Major League Baseball for “at least 20 years.” Even though Nicole Miller is not a licensee of the league, the wives and girlfriends are “all good looking and upscale. That’s means they’re bona fide customers.”