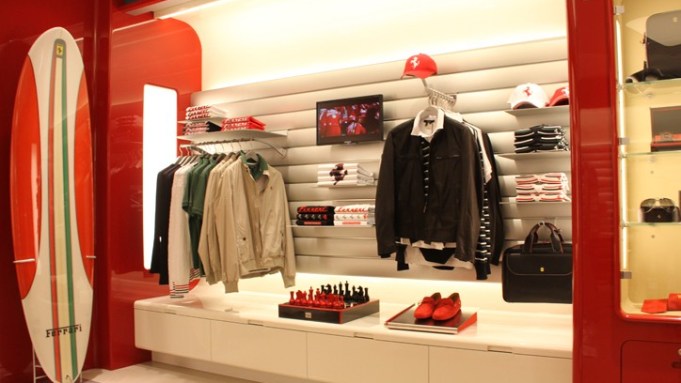 NEW YORK — Ferrari has a new formula: showcasing its sports cars and array of lifestyle merchandise under one roof.

With its vivid red lacquered walls, the 4,700-square-foot combination showroom-store that opened Monday on the corner of 55th Street and Park Avenue here, is an homage to the 60-plus-year-old Italian brand and its blend of flash, luxury and tradition. The store is adorned with miniatures of models through the decades, a display case spotlighting a crankshaft, valves and a piston, and Ferrari’s proud prancing horse emblem.

“There’s a very fluid and sleek feel to the store that evokes speed or the chassis of a Formula One car,” said a spokesman at the store.

The duality of the format extends to the clientele it’s catering to — those who might own or seek to own the luxury vehicle and those who may be fans seeking to identify with the brand even if they aren’t behind the wheel. Ferrari cars range from $197,000 for a V8 to $320,000 for a V12, but the product assortment, for men, women and children, gets as low as $10 for a notebook.

Previously, the space was purely a showroom. Now in the bid to broaden the appeal, it’s broken up into spaces by floor-to-ceiling fixturing for an asymmetric flow. At the right, there are three cars — the 458 Italia; the Ferrari California, which is featured in the movie “Killers,” and the 612 Scaglietti — and the Ferrari “atelier” private space for the “personalization” program whereby customers work out all the details and specs on the car they’re buying.

However, most of the square footage is devoted to Ferrari’s Cavallino collection of handmade accessories and sportswear, including small and large leather goods, ranging from $220 wallets to large bags priced at $2,200, as well as leather motor sport jackets, priced at $1,200. Leather used in these products is the same used in the seating of the cars.

Also sold are silk ties, $88 to $130; a chess set priced at $2,600 made in carbon fiber, the same used in the vehicle bodies, and a $400 desk set in metal, the same used to construct the auto frames. There are some cobranded products, such as the Tod’s suede car shoes for $430, and a Damiani diamond necklace. There’s also the fragrance, priced $60 to $130 for 3.4 oz., Italian-made watches with Swiss movement, priced $500 to $600, and the less expensive line of Formula One jackets and polos.

The store was designed by Studio Iosa Ghini and is licensed to Dallas-based Forza Retail, which is also the licensee of the Ferrari stores in Los Angeles, San Francisco, Honolulu and Miami. The only other U.S. Ferrari unit is in Las Vegas and is part of the Penske-Wynn dealership. Ferrari has 37 stores worldwide and is opening 12 this year.